Lake trout prey on the lake’s cornerstone fish, cutthroat trout, which are an important source of food for animals in the Greater Yellowstone Ecosystem.

In August, 122 lake trout had transmitters surgically inserted in their bellies. In … 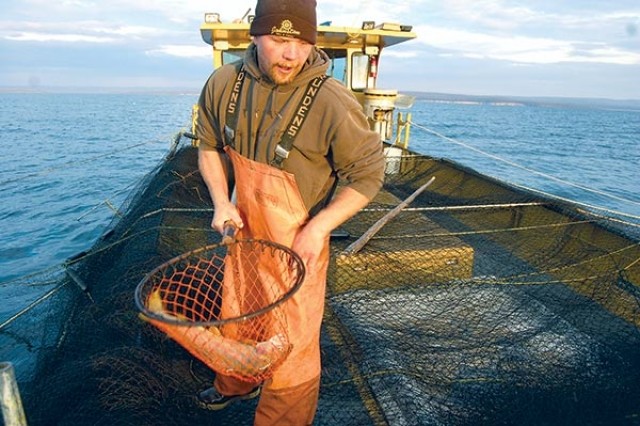 Hickey Brothers Fishery employee Steve Warwick pulls a big lake trout from a trap net. A total of 140 lake trout had radio transmitters inserted in their bellies to track the trout and lead the way to spawning beds where the National Park Service hopes to exterminate as many as possible in the future.
Tribune photos by Gib Mathers
Posted Tuesday, September 20, 2011 3:03 pm
By Gib Mathers

In an effort to save native cutthroats, scientists electronically tag lake trout

(Editor’s note: This is the first in a two-part series looking at efforts to eliminate non-native lake trout in Yellowstone Lake.)

The 300,000 to 400,000 lake trout menacing Yellowstone Lake now have traitors in their midst. Experts hope they will blaze a trail to lake trout spawning grounds, leading to the ultimate death of a large quantity of the unwanted fish.

Lake trout prey on the lake’s cornerstone fish, cutthroat trout, which are an important source of food for animals in the Greater Yellowstone Ecosystem.

In August, 122 lake trout had transmitters surgically inserted in their bellies. In September, 18 more were fitted.

The radio tags are about the size of a Halloween-sized Tootsie Roll, said Dave Sweet, of East Yellowstone chapter of Trout Unlimited, who is chairing Unlimited’s “Save the Yellowstone Cutthroat” campaign.

Like submarines, the transmitters emit pings every one to three minutes, and those signals are picked up by 28 receivers anchored to buoys stationed around the lake. The pings reveal the receiver’s number to identify the individual fish, Sweet said.

If a transmitter fish swims within one-half klick of a receiver, data can be downloaded telling direction of travel, Bigelow said.

Gresswell said he has been trying to initiate the telemetry project for more than three years.

“The fact that it is finally moving forward is due to the incredible collaborative effort involving numerous individuals and organizations that have emerged in the last six months,” he said.

The buoy-mounted receivers can deliver data, but it will take mobile receivers on the lake to pinpoint spawning grounds, said Todd Koel, supervisor for the Yellowstone fisheries program.

“It’s a beginning,” Koel said. “It’s kind of a low budget thing, but it will give us a big payoff.”

As soon as the technology is available, the National Park Service will begin attacking the spawning beds, Bigelow said.

“This is the stuff we’ve been talking about for years,” Sweet said.

Using telemetry to tail lake trout to lake trout spawning beds was the No. 1 recommendation by a scientific panel assembled by the Park Service in 2008, Sweet said.

Spawning beds can be targeted with methods based on recommendations by Dr. Jackson Gross from the U.S. Geological Survey and U.S. Fish and Wildlife Service. A few of those included electrocution, sucking the eggs or seismic sound waves.

If such measures are employed, they also would impact other fish. But lake trout spawn in the lake during the fall. Cutthroat trout spawn in lake tributaries in the spring, Sweet said.

There has been official documentation of lake trout in Yellowstone Lake since 1994. The Park Service began its attack on the species in 1995. The service had earmarked $1 million this summer for commercial and park employees to remove lake trout this season.

Experts say if half the lake trout population can be removed annually, the population will crash, Sweet said.

Crashing the population may not inaugurate a golden age for cutthroats in Yellowstone Lake, but it will afford them opportunity to rebound, which in turn will aid bears, osprey, otters and other wildlife that depend on cutthroats for food. Predators can prey on cutthroats because they swim the lake’s tributaries, but lake trout are a deepwater fish.

Lake trout can’t be completely eliminated in Yellowstone Lake, but they can be suppressed, giving cutthroats a chance to make a comeback, Sweet said.

Transmitters, with a three- year life, cost $400 each. Receivers, with an unlimited life, run $1,400 and are on loan from the USGS, Sweet said.

However, they need a total of 350 transmitters to effectively track lake trout, Sweet said.

As per Park Service orders, every lake trout caught by an angler in Yellowstone Lake must be killed. Although unlikely, if an angler finds a transmitter in a fish’s belly, they should return it to a Grant or Lake Village ranger station, Koel said.

The transmitters can be recycled and inserted into another lake trout, Sweet said.

Conservation Association pitched approximately $10,000 to $12,000 for equipment such as rope, buoys to attach the receivers and travel expenses. They currently are raising funds, Sweet said.

Yellowstone Superintendent Dan Wenk, who was appointed to his position in October of 2010, met with Trout Unlimited, the Greater Yellowstone Coalition and the National Parks Conservation Association in January. Wenk made the telemetry project a priority and expedited its commencement.

Trout Unlimited, the National Park Service, the U.S. Geographic Survey, the Greater Yellowstone Coalition and the National Parks Conservation Association are all cooperating. “Everybody is on the same page,” Sweet said.