‘Just a feller,’ Actor Wilford Brimley reflects on long career, stars he’s known and the music he loves to sing

Several million movie and TV watchers will disagree with that self-assessment. Brimley has appeared in dozens of movies and TV shows in the past half-century and has carved out a successful career playing cantankerous old guys with good …

‘Just a feller,’ Actor Wilford Brimley reflects on long career, stars he’s known and the music he loves to sing 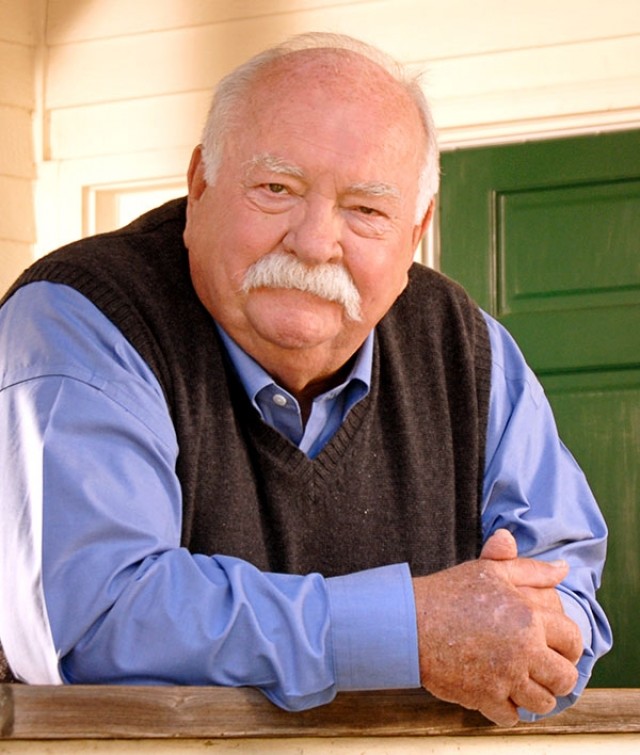 After 50 years in show business, Wilford Brimley said he doesn’t consider himself a star, or even an actor, for that matter. He likes that folks he meets in Wyoming treat him that way, too.
Courtesy photos
Posted Thursday, March 20, 2014 2:26 pm
By Tom Lawrence

“I’m not a musician. I’m not even an actor,” Brimley said during a telephone interview with the Tribune Thursday. “Just a guy, just a feller.”

Several million movie and TV watchers will disagree with that self-assessment. Brimley has appeared in dozens of movies and TV shows in the past half-century and has carved out a successful career playing cantankerous old guys with good hearts.

He also has a lifelong love for music, especially jazz and standards. Brimley will perform with the Ray Brown Tribute Trio, made up of Jeff Hamilton, Christoph Luty and Larry Fuller, during the Northwest Jazz Fest this week in Powell.

The group will perform at 7 p.m. Wednesday at the Powell High School Auditorium. The NWC Studio Singers will open the show, followed by The Bobs, a four-piece a capella group from Seattle.

The Ray Brown Tribute Trio and Brimley, who is billed as a “special guest,” will then take the stage. Ray Brown was an influential double bassist, cellist and composer who toured and recorded with many famed jazz artists.

Brimley, 79, said he will “sing a song or two, I guess” during the show. He has made some appearances with Jeff Hamilton and his trio including performing on “The Late Late Show with Craig Ferguson” on CBS, where they performed “Pick Yourself Up,” a 1936 Jerome Kern classic. They also teamed in 2013 to record a CD, “Wilford Brimley with The Jeff Hamilton Trio.”

“I’ve always had a love for music,” Brimley said. “I grew up in a home filled with music.”

Tickets are $15, $12 for students, and will be sold at the door. The show is being sponsored in part by Garvin Toyota of Powell.

Brad Howey, NWC’s director of bands, said Brimley “propelled this whole thing along” when he offered to perform.

“We kind of credit him,” Howey said. “Didn’t know him from Adam before that. And I tell you, I’ve not met a finer gentleman. He is well-versed in music and a fine singer.”

Brimley said he is looking forward to seeing and hearing the musicians at the show. Once again, he insisted he was not really a musician.

“I never really planned to do so,” he said. “It just kind of happened.”

That’s how he explains his long, successful career in TV and movies, too.

The Salt Lake City native has always been an avid horseman. He was a rodeo rider and blacksmith in the 1950s and 1960s after a three-year hitch in the Marines, where he was based in the Aleutian Islands during the Korean War.

“I was a horseshoer,” Brimley said. “I worked all over, Idaho, Utah, Colorado, Arizona and Nevada. I shod the horses for the production companies.”

Soon, under the name Anthony “Tony” Brimley, he started doing stunt work and appearing as an extra in Western TV shows such as “Gunsmoke” and “Bonanza,” among others.

In the mid-1970s, he appeared in “The Waltons” in a recurring role and was billed as A. Wilford Brimley. Brimley called it “just a day job” and said he would show up when asked.

The names Anthony, Tony and then the initial A were gradually dropped, and he started using the name that would become famous.

Actor Robert Duvall played a key role in getting him bigger and better parts, Brimley said.

They co-starred in “Tender Mercies,” the tale of an alcoholic, broken-down country singer and songwriter. Duvall won an Oscar for the lead role in a part based on country legend Lefty Frizzell, and Brimley received plaudits for his work as an agent and old friend.

But the 1983 movie, which Brimley said he is proud of, is special to him for another reason.

Beverly, a Waxahachie, Texas, native, was at the time “married to a guitar player” who was working with Duvall. She and her husband and Brimley and his wife all became friends, he said.

“Well, time goes on and things happen,” he said. “Her husband died and my wife died. And I got the best thing Texas thing ever made.”

Among the other roles Brimley has had over the years was as Pop Fisher, the beleaguered manager of the New York Knights. The baseball fantasy starred Robert Redford and Duvall.

“I’m a baseball fan,” Brimley said. “I didn’t play, but that was a lot of fun. And I got to be in it with my best friend, Dick Farnsworth.”

Richard Farnsworth, who played the laconic coach Red Blow in the movie, had a career much like Brimley’s, starting as a stuntman and extra and rising to co-star status in movies. The two had a memorable scene in the movie where they tried to guess which song the other was whistling.

Brimley said that was a real moment that was captured on film and used in the movie.

“We played name that tune for 25 years. It was not part of the script,” he said. “Not at all, not at all, we were just killing time.

“Barry Levinson, a very, very fine director and there aren’t many of them around anymore, he always had a camera around,” Brimley said.

The same thing happened in the scene when the bellboy cracked up the players, manager and coaches by pretending to make his cap rise by blowing into his thumb. Farnsworth taught the boy who played the part to do that, Brimley said, and Levinson put it into the film.

Redford “did his own thing,” which was fine, Brimley said. He has acted with other major stars, including Paul Newman — “a really, really good guy” and Robert Mitchum.

“He was the essence of what you refer to as a big star,” Brimley said. “And he didn’t know it.”

He also made movies with legendary actors such as Maureen Stapleton, Don Ameche, Jessica Tandy and Hume Cronyn, whom he starred with in “Cocoon.” The 1985 smash hit was directed by Ron Howard, who was transitioning from TV star to film director.

“He was a kid,” Brimley said. “He got a lot older doing that movie. He was with some veteran actors ... they were the big time.”

Of course, Brimley has been around a lot of famous people. He was a bodyguard for reclusive billionaire Howard Hughes, although he doesn’t care to discuss that very much.

“He was a good guy,” he said, adding that Hughes paid him well. Hughes preferred to hire members of the Church of Latter-day Saints as aides and staffers, and Brimley himself is a member of the LDS church.

He said despite being in movies and TV shows for most of his life, he doesn’t have a clue on how to act other than to play himself.

“I can’t talk about acting,” Brimley said. “I don’t know anything about it. I was just lucky enough to get hired.”

The last film he was in was “Did You Hear About the Morgans?” The comedy placed two New Yorkers on the run from a killer, played by Hugh Grant and Sarah Jessica Parker, in the fictional small town of Ray, Wyoming, located about where Greybull is in real life, although the film was made in New Mexico.

Brimley played a small part as a crusty conservative resident who clashes with the transplanted New Yorkers.

“It was somewhat of a substandard movie,” he said.

While his career has slowed, Brimley said he may make another movie.

“If something good came along, I’d take a look at it,” he said. “People send me scripts.”

Brimley said he has been trying for 25 years to get a movie made on a story he wrote. But he said he doubts it will ever get made.

Brimley said while he has made Westerns, comedies and all manner of films, he has no favorite genre.

Brimley has also appeared in TV commercials for Quaker Oats and Liberty Medical Supplies, where he tells people how to get at-home supplies to deal with diabetes. It’s a cause he has embraced since his own diagnosis in 1978, and he has been honored for speaking out about the disease.

“I have diabetes,” Brimley said. “There’s a host of people who have diabetes and they deny it. They think there’s something to be ashamed about.”

Brimley said he is dedicated to “dispel” that myth. Comedians and some TV shows have teased him about his work on diabetes, including the way he pronounces it. Brimley said he has taken it all in stride.

“You can’t stop that,” he said. “One of the funniest was when John Goodman played me on a commercial on ‘Saturday Night Live.’ You can’t stop that. You can either accept that or let it bother you. I accept it.”

Brimley said he enjoys life in Greybull, and has called it home for a decade. He and Beverly operate a ranch, where he gets to ride horses, do some blacksmithing and enjoy the outdoors.

“Aside from the imaginary state line, it’s the same kind of country, exactly, as Utah,” Brimley said. “It’s the Rocky Mountain West. I need to be there.”

Folks in the area don’t make a fuss over him or pester him for autographs, he said. To them, they are just Wilford and Beverly, not the movie star and his wife.

“Those are names that people assign to you. I never assign that to myself,” he said. “I get along with the people here.”

The trip to Powell for Wednesday’s concert will be on roads he is familiar with, Brimley said.

“We go to Powell quite often,” he said. “There’s a good barbershop there (Sportsman Barber Shop) and when I was putting up a building I did a lot of business with a steel company there. Oh yeah, we come to Powell.”

Brimley said he thinks the members of the trio will talk with students about learning experiences and opportunities. They’re the real stars of the evening, he said.

“That’s show’s not about me. Performing in public is not something I do often or care to do,” Brimley said. “I’ll do it because I was asked to do it, and I’ll do my best.”