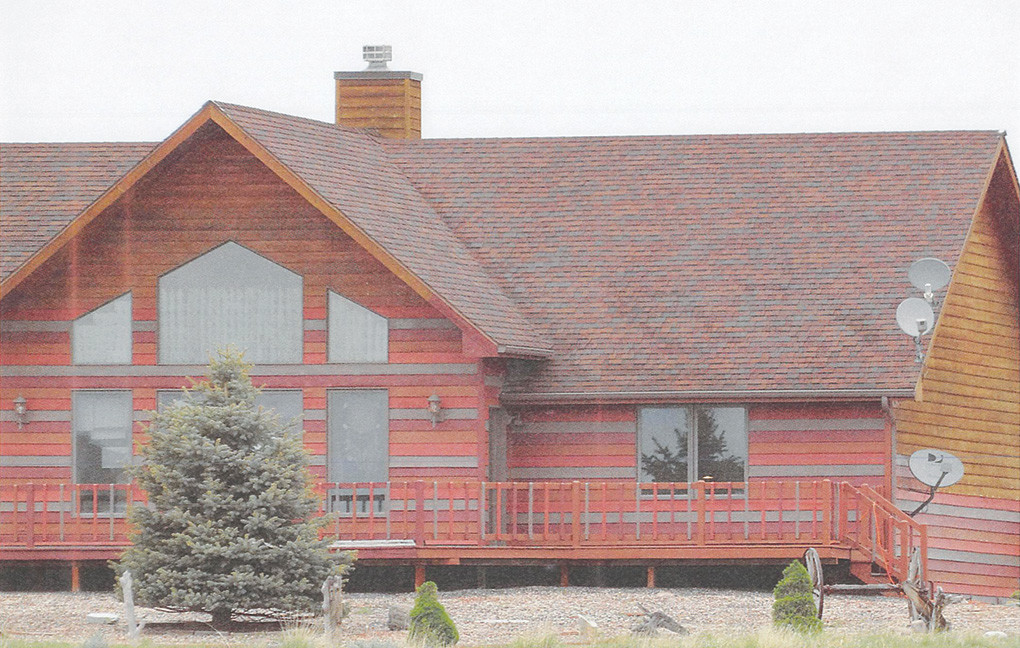 The Cody Ranchettes Homeowners Association says the paint scheme on Kelly and Debra Hennessy’s home is not in harmony with its surroundings and submitted this photograph to the court as evidence.
Courtesy photo
Posted Thursday, August 2, 2018 8:00 am
By CJ Baker

A bitter dispute between a rural Cody homeowners’ association and one of its members — over a multi-color paint scheme — has spilled over into Park County’s District Court.

The Hennessys, 13-year residents of the subdivision, have been painting the boards of their home four alternating colors: cafe gray, maroon rust, walnut bark and cinnabark. The HOA contends that the walls of the house need to be one color, with one color for the trim, and that their painting plans must be approved by the association’s Architectural Control Committee.

Through their attorney, Larry Jones of Cody, the Cody Ranchettes HOA has asked the court to require the Hennessys to “return their house to its original exterior of brown stained cedar boards” if they can’t come up with an approved paint plan.

The Hennessys have virulently objected to the HOA’s actions. They say the HOA is overstepping its authority and selectively enforcing the subdivision’s covenants by taking up a “crusade” against them.

“If by some miracle you manage to obtain a judgment or injunctions against us, we will jam you up with endless appeals and countersuits, then do everything possible to make this house look like warmed-over dog[feces] while still satisfying any court mandates,” Kelly Hennessy wrote in a May 28 letter to a Cody Ranchettes leader.

While the HOA contends the “four different colors including blue and whites … is not in harmony with the general surroundings,” the Hennessys dispute that. The couple says they’ve chosen “four muted earth tones that sum together in an eye-pleasing Gestalt at a distance,” a mixture they call, “Cowboy Autumn.”

The dispute started in earnest on April 20, when two HOA members hand-delivered a letter to the Hennessys, directing the couple to submit their new paint scheme to the Architectural Control Committee for review.

The Hennessys responded with a barrage of angry and profane letters.

“We’ll only modify our meticulously chosen color scheme at the implied or express point of a gun, and rest assured you filthy dirtbags will NEVER drive us out of this community,” Kelly Hennessy wrote to the architectural committee on April 23.

The Hennessys were particularly upset that the HOA’s letter was personally delivered — calling the neighbors who brought it “cretins” and “filthy [expletive]ing morons,” among other insults; the HOA has said the hand delivery was meant to be “less impersonal,” and has apologized that it wasn’t received that way.

In early May, Kelly Hennessy offered to settle the dispute by paying a voluntary $25 fine to the Cody Ranchettes HOA and then being allowed to finish painting. HOA leaders declined, with Jones saying in a May 18 letter that the architectural committee would not agree to the current colors, as “blue and white are not considered earth tones.” Jones said the HOA was willing to help the couple repaint the house once a new color scheme was approved.

“My clients prefer not to proceed with a legal action and would like to work this out with you in [a] cooperative manner, but also believe in the importance of maintaining the current harmonious color scheme of the subdivision,” Jones wrote.

The message triggered another series of profanity-laced letters from Kelly Hennessy, who — after calling Jones a “bottom-feeding, HOA ambulance chaser” — said they wouldn’t stop painting.

On May 24, Kelly Hennessy wrote to the Architectural Control Committee and said that, if the case went to court, “We’ll proceed to take it to the back seat, run it like a track meet, as Gwen Stefani sang.”

“Indeed a new day has dawned, Celine Dion, and whatever happens, rest assured that WE WILL NO LONGER PLAY PEASANT TO YOUR IMPERIAL OVERLORD AT CODY RANCHETTES, [expletive]HOLES!” the letter closed.

In response to the Cody Ranchettes HOA’s complaint and request for injunction, Kelly Hennessy submitted a 23-page filing to the court, generally arguing that the association is overstepping its bounds and being malicious in its enforcement of the covenants.

The filing took a similar tone to Kelly Hennessy’s earlier letters — including calling the Cody Ranchettes “a latter-day socialist commune chock-a-block with spiteful troglodytes addicted to coercion like crack babies.”

The updated response also includes a counterclaim that, among other contentions, alleges the HOA has breached the covenants by trying to enforce non-existent rules, has failed to operate in good faith and breached its fiduciary duties to the homeowners by spending money on the suit against them.

In the document, the HOA and the Hennessys asked the court to hold a scheduling conference, where a tentative trial date will be set.

(Editor's note: This story has been updated to reflect that the parties have asked for the Aug. 10 hearing on the temporary restraining order to be vacated.)