For their final artistic endeavor of the school year, students created lightsabers inspired by “Star Wars.”

About 20 art students made replicas of the famed laser swords used by Jedi and Sith characters; several robotics students also were … 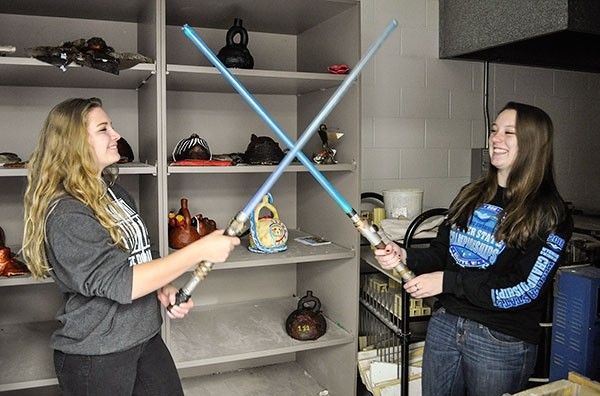 PHS art students Claire Miner (left) and Bethany McCaslin duel with their lightsabers on May 26.
Tribune photo by Tessa Schweigert 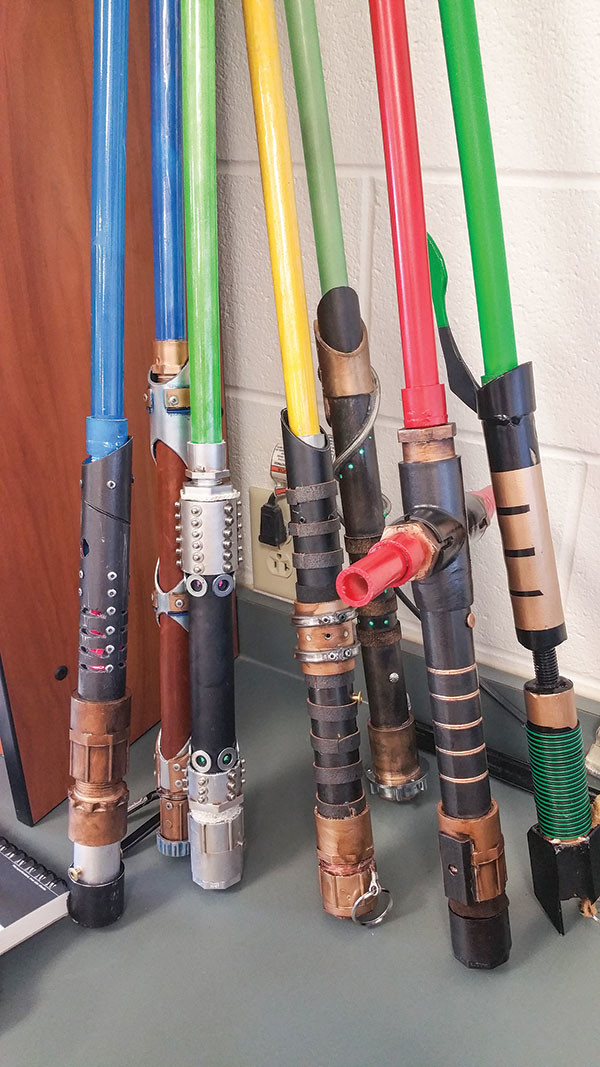 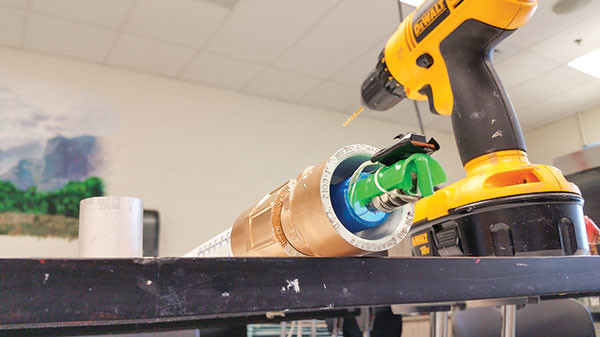 PHS students used a variety of tools and materials to create their lightsabers. 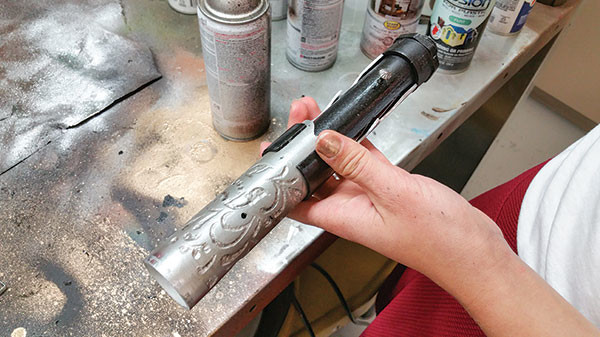 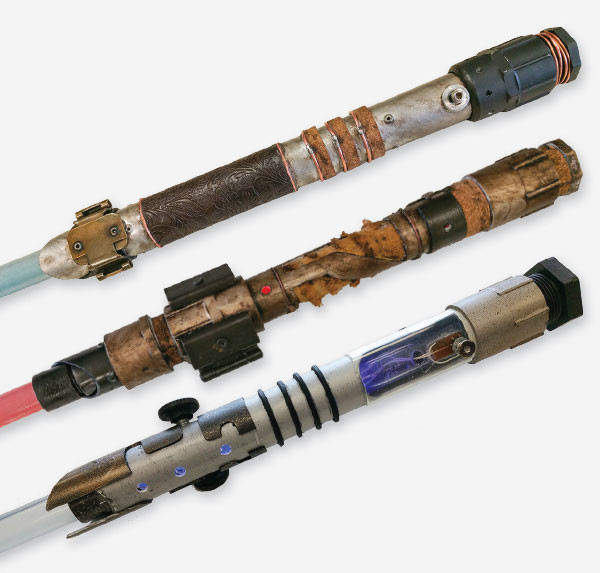 These lightsabers (from top to bottom) were created by Claire Miner, Taryn Bohlman and Lexee Craig. 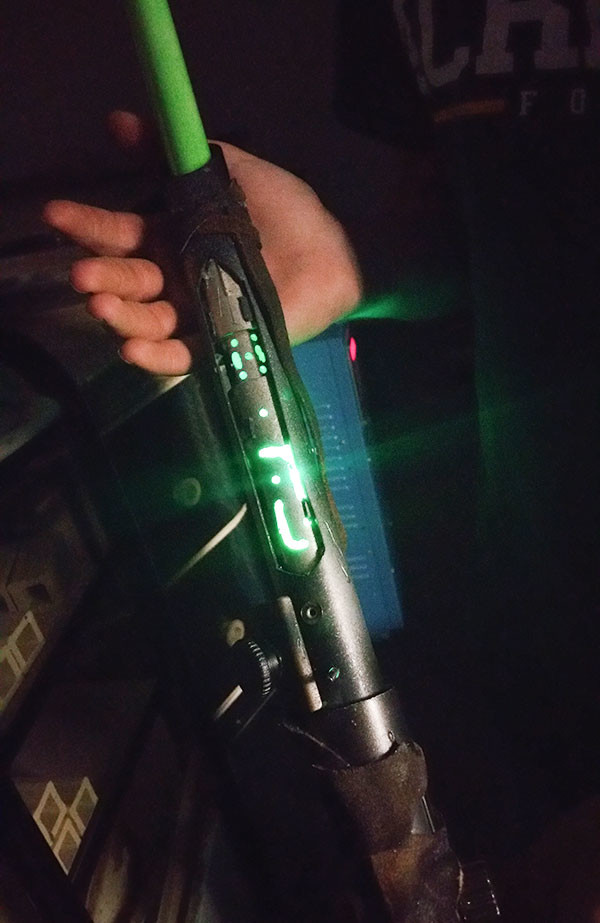 PHS student Austin Asher created this lightsaber as part of a recent art project. Students had to figure out how to make their replicas light up.
Previous Next
Posted Thursday, June 16, 2016 2:53 pm
By Tessa Baker

“As true Jedi, they had to make their own lightsabers,” said Jim Gilman, Powell High School art teacher, of his students’ latest project.

For their final artistic endeavor of the school year, students created lightsabers inspired by “Star Wars.”

In addition to the design, students had to figure out how to put the light in their lightsabers.

The idea for the project came from Brett Lara, investigator for the Powell Police Department. In January, soon after the release of the new “Star Wars” film, Lara was talking with Gilman about what his students were tackling next.

The PHS art department is known for its unique projects, including a submarine, dragon and stagecoach in recent years.

Initially, Lara suggested creating a Millennium Falcon — the spacecraft commanded by Han Solo — but Gilman said it had already been ruled out as too complicated.

Then Lara suggested another idea: Lightsabers.

That got the wheels turning.

Students started researching the project in April, drawing from photos found online and some models of swords and lightsabers. They used PVC pipe as the base, then utilized a variety of other materials in their lightsabers — leather, canvas, cork, vinyl and even old hinges from a cabinet.

“We used all kinds of stuff — anything we had in our art room,” Gilman said.

Some students used flashlights to illuminate their replicas; others dismantled some donated princess-themed light-up wands and adapted their lights and batteries for the lightsabers. Students had to figure out how to get the repurposed lights to switch on and off, and also how to provide access to the battery so it could be changed.

“That was a challenging part,” Gilman said.

“There was a lot of work that went into them,” he said.

Lara was amazed at how the students’ unique designs turned out.

“Their own creativity and personality was demonstrated in each. You could see it,” he said. “There wasn’t one really like another.”

“Jim’s one of those guys who’s extremely talented — you give him something and he runs with it,” he said. “Jim is an excellent instructor.”

Lara offered help along the way and also made a deal: If PHS students created lightsabers, he’d teach how to use them.

Lara held up his end of the bargain with demonstrations on how to wield their lightsabers.

“What you see in a ‘Star Wars’ movie — and this goes back to the beginning movies — it’s all primarily based on the Japanese art of Kendo or Kenjitsu, the sword art of the Samurai,” said Lara, who teaches martial arts.

“Learning how to use it was cool,” said Claire Miner, a PHS art student.

Powell Police Officer David Ferguson also helped with the project, bringing in lightsabers to show students what “real” ones look like — at least as far as movie props go — and how they worked, Lara said.

“We have some big ‘Star Wars’ fans (at the police department),” Lara said.

Gilman has talked about doing the lightsaber project again next year, and Lara said his offer to help still stands.

“I just felt really privileged to be involved,” he said. “I had a blast.”

The project also gave some students a new appreciation for the original “Star Wars” trilogy.

“I think a lot of them will go back and watch the old movies,” Lara said.