Innovators in Wyoming, Montana team up to build PPE

The COVID-19 pandemic has created exponentially increasing demands for personal protective equipment, especially in the healthcare industry. Supplies of PPE are quickly being exhausted, which could …

Innovators in Wyoming, Montana team up to build PPE 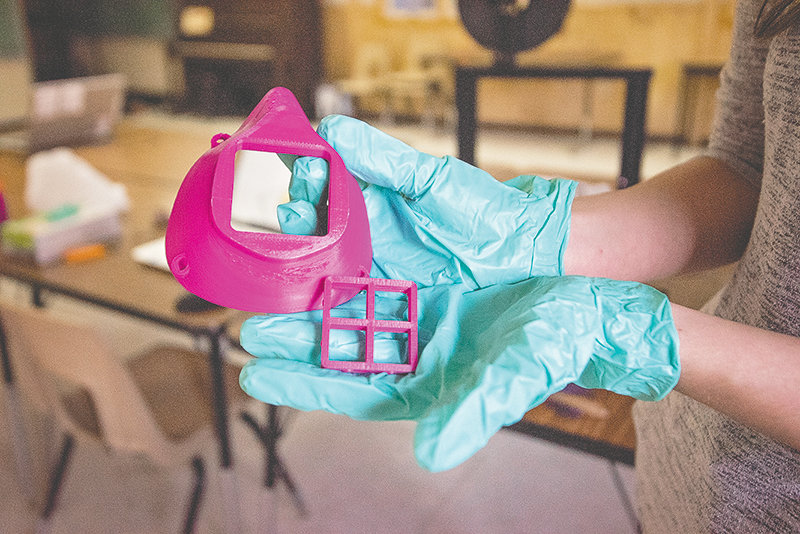 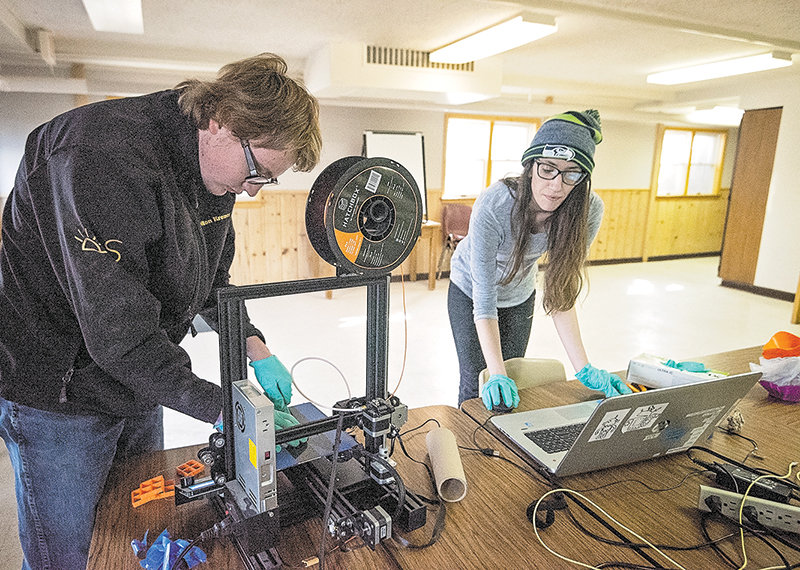 Bri Graff, right, and Colton Kremer test out a mask design on a 3D printer at the Powell Makerspace. As shortages deplete stockpiles, volunteers like Graff and Kremer are working across the country to produce personal protective equipment for healthcare workers and the public.
Tribune photo by Carla Wensky
Previous Next
Posted Tuesday, April 7, 2020 8:20 am
By Kevin Killough

The COVID-19 pandemic has created exponentially increasing demands for personal protective equipment, especially in the healthcare industry. Supplies of PPE are quickly being exhausted, which could put healthcare workers and the public at risk. Building up the supply using traditional chains will take time — time they really don’t have.

There are volunteers giving their time and resources to help address the issue, but beyond that is the story of the astounding ability of American ingenuity and innovation to surmount any challenge.

Phorge Makerspace in Sheridan runs a chat server on an app called Discord where several dozen volunteers — most of them at Makerspaces in Powell, Sheridan, Riverton, and Gillette — bounce ideas off each other, working out problems and participating in a cooperative, voluntary venture.

Among those regularly contributing to the online discussion is Bri Graff, Americorp VISTA volunteer for the Powell Makerspace. She’s discussed the challenges of getting enough ventilation through different mask designs, what types of plastics allow for easiest fitting, and the outcomes of tests at the University of Florida of cloth surgical masks made with a polypropylene material. That was all around midnight on a single Monday.

The next day, Graff had an exchange with other 3D printer operators about which suppliers of the plastic filaments used in 3D printing offer the best prices.

The exchanges on the server move quickly and knowledge evolves by the hour across multiple threads involving engineers, hobbyists, mathematicians, tailors, and more.

“It takes all these people, who are doing what they can do with the skills they have,” said Spencer Kuzara, vice president of Phorge.

The Makerspace volunteers and their associates are one part of the story. Another team in Montana developed the designs for the masks the 3D printers are using.

Driving home from work one evening a couple months ago, Dusty Richardson, a Billings Clinic neurosurgeon, was listening to a story on the radio about shortages of PPE for healthcare providers. He started to ponder how he might help address the issue.

When he got home, he called his friend, Spencer Spraugg, a Billings dentist whose son Colton is skilled at coding and 3D printing. On the back of a receipt, Richardson drew a concept design for a mask, took a picture and sent it to the Sprauggs.

Colton researched what 3D printer designs were available online for mask alternatives, and found one from Spain he could tweak to meet the specifications of the drawing Richardson provided. The Montana team went through about six or seven iterations of the design before they had something they felt was ready to release on the internet for others to download. The Montana Mask was born on March 22, with the design files, specs and FAQs placed on www.makethemasks.com.

Graff has been working with the design over at Powell Makerspace, and it’s faced some challenges.

Richardson said the current design won’t quite live up to the standards of the coveted N95 masks, which provide some of the best protections against the coronavirus for the wearer. However, the Montana Mask is usable as a general surgical mask. Surgical masks stop fluids from coming out when the wearer coughs and sneezes, so it can help contain the contagion.

“The project is moving forward, and the community support has been great,” Richardson said.

The biggest problem the masks face, Richardson said, are the regulatory burdens. Hospitals are, in better times, required to source their PPE from FDA-approved suppliers. Faced with shortages over the pandemic, the FDA has loosened some of its restrictions and provided guidance on 3D-printed PPE.

“Those have been helpful,” Richardson said.

Back on the Phorge chat server, a discussion revolves around how best to word legal disclaimers. Besides protecting producers from legal liability, the disclaimers also warn users the items have not been approved by federal and state authorities.

“These are intended to be a last-resort device,” explained David Maulik, director of 307 Makerspace in Riverton.

He’s been working with the Montana Mask and said tests are showing it has value as an emergency source.

“The feedback we’ve gotten from [healthcare professionals] is encouraging, but more needs to be done to the design to satisfy their needs,” Maulik said.

Richardson said the Billings Clinic received 200 printed masks for testing, and the feedback was positive. The results of these clinical tests are on the Make the Masks website, including sanitation, respiration and fit tests.

Richardson said the clinic has a stockpile of supplies, which are satisfying demand for the time being. The Montana Mask effort is more a proactive measure to make sure they have what they need.

“As those stockpiles dwindle, this is where the masks come into play. We’re trying to be ahead of the curve,” he said.

The printers are running full time at Makerspaces across Wyoming. Kuzara, in Sheridan, said it’s helping to demonstrate that 3D printing has enormous potential for additive manufacturing.

“I see Makerspace as a community tool,” he said.

The Makerspace teams are also working alongside other printer owners throughout Wyoming communities.

Joel Hayano, Powell High School math and technology teacher, reached out to Powell Valley Healthcare to see if he could help provide them with PPE supplies. He has four printers and is coordinating with other printer owners to add more capacity.

Jim Cannon, PVHC marketing director, said the healthcare organization is well stocked with industrial masks for its employees, but staff are working with Hayano and a few others to provide PPE for the community.

Private companies are getting into the effort as well. Phorge has been coordinating with people at Kennon Products, an employee-owned textile manufacturer in Sheridan. Its CEO, Joe Wright, serves on the Sheridan Memorial Hospital Board of Trustees. The board discussed shortages of PPE, which got Wright considering how Kennon could use its resources to fulfill the PPE needs of local healthcare providers. They decided producing soft masks would be the best use of their resources.

Kennon began assembling kits that include materials and work instructions for creating soft masks. Anyone with the knowhow and a sewing machine can collect a kit, produce the masks and return them to the hospital. They also are producing surgical gowns.

“We at Kennon are simply trying to do the right thing like so many others in our community to assist them in overcoming this crisis,” Baca said.

Meanwhile, the 3D printer operators continue to innovate techniques, refine designs and work together to solve problems. And the effort is evolving rapidly.

On Thursday, Hayano got on the Phorge server to relay word that PVHC needed 100 face shields. The hospital could get the plastic shields, if Hayano could get the headbands. Hayano asked if Powell Makerspace could help.

About an hour later, Maulik in Riverton asked if PVHC had a preferred design — and if anyone had an alternative to elastic for the headband tension setup.

“I have about 5 yards [of elastic] and the shield takes around 14 inches each, so it won’t last long,” he told the group.

Another hour later, Graff jumped in to say the Powell Makerspace had built about seven of the National Institutes of Health headband design, which had to be scaled to 95 percent to fit the printers. Graff had about five rolls of PETG filament that Hayano could use, and she’d run them over if needed.