In Powell, FCC commissioner talks next generation of broadband

Federal Communications Commissioner Brendan Carr visited Montana and Wyoming last week to learn about rural broadband and workforce development in the area. He has taken an interest in helping rural …

In Powell, FCC commissioner talks next generation of broadband 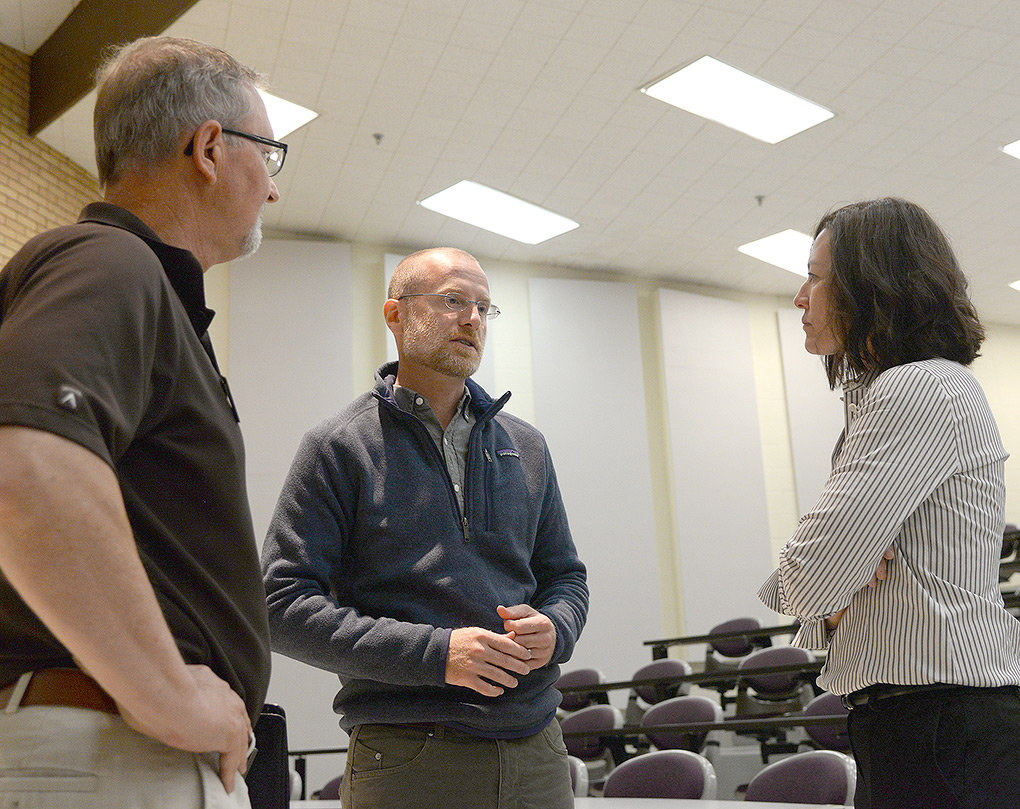 Federal Communications Commissioner Brendan Carr visited Montana and Wyoming last week to learn about rural broadband and workforce development in the area. He has taken an interest in helping rural communities improve their broadband connectivity.

Before embarking on his tour, Carr gave a public presentation at Northwest College. Stefani Hicswa, NWC president, explained Carr’s interest in rural America and where community colleges have a role in educating a workforce for the new broadband technologies.

“He had me at ‘rural,’” Hicswa joked while introducing the commissioner.

Commissioners at the FCC don’t oversee geographic areas. They have a lot of latitude in choosing issues to focus on within the greater mission of the federal entity. Carr has taken a lead in updating regulations for 5G infrastructure, which is the next large buildout for broadband technology. It follows 4G LTE that people regularly use on their smartphones for data.

The newest generation of broadband technology has 10 to 100 times faster download speeds, with a lot less latency, which is, to put it simply, a measure of how quickly data gets from one point to another.

The 5G networks would also allow more users to connect without a lot of degradation to the performance of the network.

It might bring more broadband to more homes and businesses, including those in rural areas. This would be good news to Royal Stukey.

He owns Stukeys Sturdy Shooting Benches, located on the east Willwood, and was one of the attendees at NWC for Carr’s discussion. With the less than 1 megabyte download speeds he gets, Stukey said it makes it hard to do something as routine as videoconferencing; he’ll be looking at a slide during a presentation, and the speaker will be discussing the following slide that has yet to show up on Stukey’s end.

The benefits of broadband, besides economic development, also extend to improved healthcare for rural communities. With doctors in short supply and critical access hospitals closing at an alarming rate, greater broadband could work with other monitoring technologies to put patients in touch with doctors through telemedicine.

Carr gave the example of a woman in rural Mississippi with diabetes who uses apps on her iPad to monitor her blood sugar and other information, which healthcare workers can review remotely.

Getting fiber directly to rural locations, such as Stukey’s business, is a challenge. The City of Powell has fiber to the home, but costs are much higher for rural broadband infrastructure buildouts. Carr said it can cost about $30,000 per mile to lay fiber-optic cable. A mile of fiber can serve a lot of residences and businesses in a large city, but in a sparsely populated rural area, a mile of fiber serves far fewer people. This creates a revenue problem.

In an effort to lower the costs of infrastructure, Carr said he’s worked with federal, state, and local regulators to streamline the permitting process and lower fees.

Carr discussed a challenge faced in Wyoming, with so much land owned by the federal government. He said a typical permitting process — from citing to completion of the tower build — can be two years; if it’s on federal land, that process can take up to four years, Carr said. A lengthy process is more expensive, as well.

“The federal government is slow and too expensive,” the commissioner said.

The 5G buildout is not separate from the fiber-optic buildout. The next generation network requires a lot more towers than the 4G network did, which required about 250,000 towers to reach its current level of availability. The 5G network will require 10 to 100 times as many, but these are much smaller than the cell towers with which people are familiar. There are some exceptions, but typically they’re small enough that they get attached to existing structures — such as buildings and street lights.

Carr said 5G is not going to be the only option for broadband service, nor is that the goal. He discussed the mix of satellite and other options as being important, and fiber will continue to be part of the infrastructure, since each of those 5G towers will need to be connected to fiber.

Carr also talked about the workforce training needed for this infrastructure. Jobs in the industry, he said, are “good, well-paying, solidly middle-class jobs.”

They also don’t require four-year degrees, which makes the education low for those who pursue such a career.

The commissioner noted that average internet speeds nationwide are up 40 percent, and the number of people in the country with no broadband access is down 20 percent.

“The numbers are moving in the right direction,” he said.