Wyoming women’s group works to empower each other through hunts

Golden rays of morning sunlight highlighted tanned tops of wild grasses as three white-tailed deer browsed on the edge of a field outside Meeteetse. They had no idea the Sisters of the Sage were on …

Wyoming women’s group works to empower each other through hunts 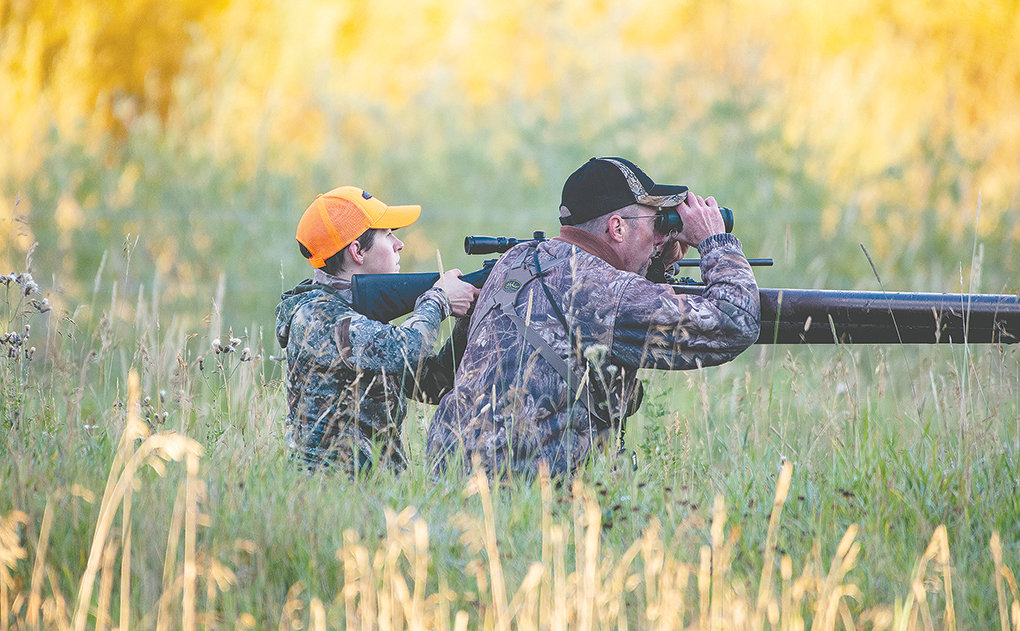 Sarah Hamlin watches her target while Fred Williams, hunting mentor and state director for the First Hunt Foundation, looks for an opening while hunting for a doe on Saturday on the Antler Ranch near Meeteetse.
Tribune photo by Mark Davis 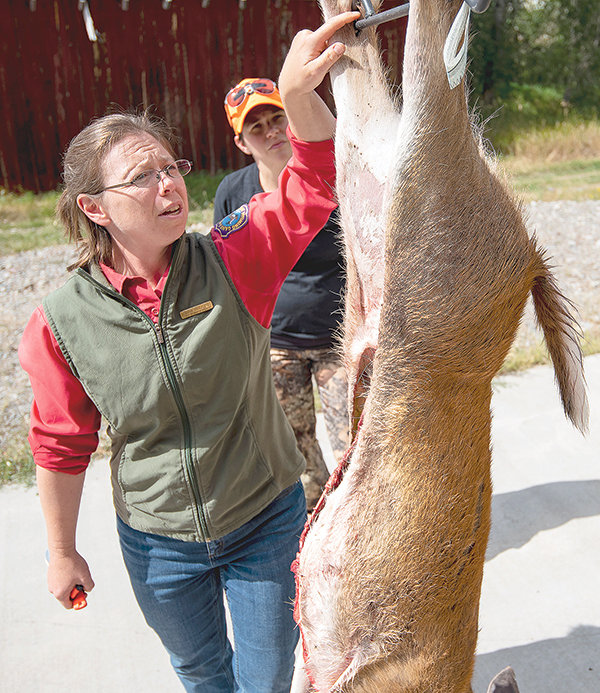 Tara Hodges, information and education specialist with the Wyoming Game and Fish, helps Sarah Hamlin process her deer. Hodges volunteered her time to mentor hunters in the women’s group Sisters of the Sage.
Tribune photo by Mark Davis 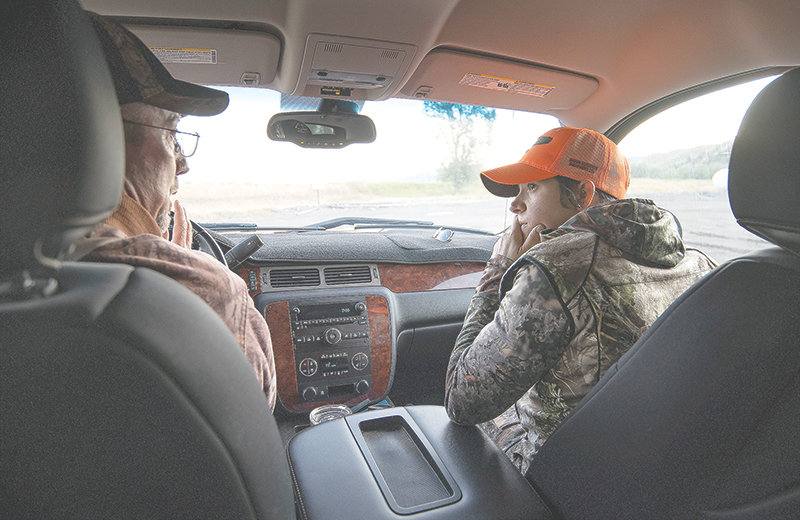 Fred Williams, state director for the First Hunt Foundation, talks with Sarah Hamlin while mentoring her through a white-tailed deer hunt last weekend in the Meeteetse area. Hamlin is a member of the Sisters of the Sage, a group of women looking for further experience in hunting.
Tribune photo by Mark Davis 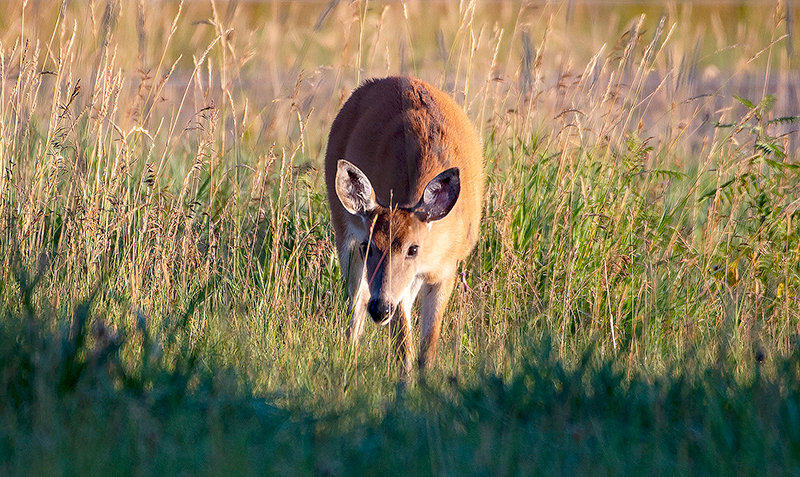 A white-tailed doe browses in an agricultural field near Meeteetse before being harvested during a Sisters of the Sage hunt.
Tribune photo by Mark Davis 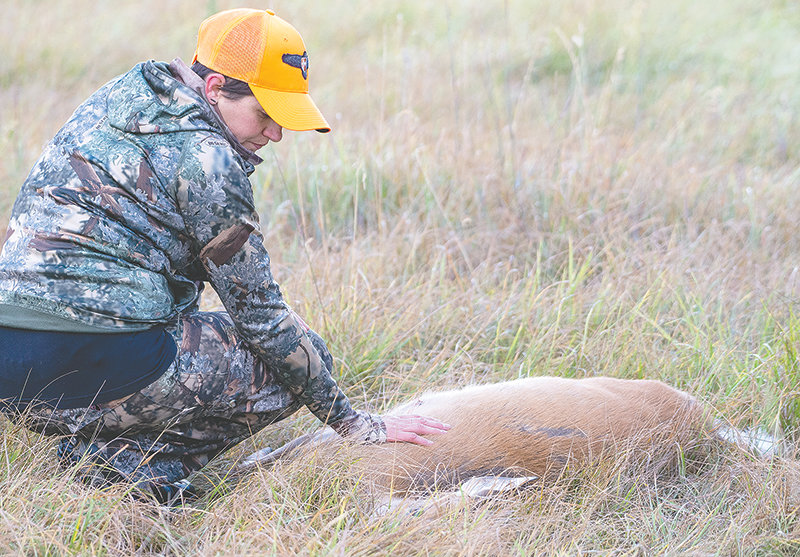 After taking a lethal shot on a white-tailed doe near Meeteetse, Sarah Hamlin takes a minute of silence with her prey. ‘Women tend to express a higher level of sentiment for the animal after the harvest,’ said her mentor, Fred Williams.
Tribune photo by Mark Davis
Previous Next
Posted Thursday, September 12, 2019 8:25 am
By Mark Davis

Golden rays of morning sunlight highlighted tanned tops of wild grasses as three white-tailed deer browsed on the edge of a field outside Meeteetse. They had no idea the Sisters of the Sage were on their trail.

Sarah Hamlin followed the lead of her hunt mentor, carefully crawling to a hidden position with a Remington .243 in tow. The team made sure to stay low, in the shadows of the cover heavy with dew.

Hamlin’s husband, Mark, isn’t interested in hunting — and “never will be,” Hamlin said. But she wants her 10-month-old daughter, Maggie, to grow up with the experience.

Hamlin decided it was up to her to bring home some fresh meat.

“I like being out on our landscape. I like harvesting something local and bringing it home to our kitchen. And I want to do it well,” she said. “The mentoring and camaraderie helps motivate me.”

It may be a dozen years until Maggie can harvest a deer, but she’s already been on a hunt. Hamlin was eight months pregnant when she harvested her first mule deer last year.

“We got lucky: [the doe] fell really close to the truck,” she recalled.

Hamlin’s goal this year was a dry yearling whitetail. Maggie stayed home with a baby sitter — the first time away from mom and dad. By the time Maggie is ready for solid food, there will be plenty of wild game in the freezer.

With Williams at her side, Hamlin squeezed the trigger and found the target. It was a liver shot, hitting an inch back of the deer’s lungs and heart. The next 15 minutes were excruciating for the new hunter while she waited for the doe to pass. It’s one of the tougher lessons in hunting: You can’t always be perfect. Eventually every hunter deals with welling emotions as death comes slowly for their prey.

After the duo was able to approach the doe, Williams pulled in Hamlin to celebrate. Hamlin remained respectful and thankful, taking time to gently inspect the deer. Tanya Lewis and Valerie Baca, who were hiding in brush to watch the hunt unfold, wandered in after the kill. There was a long, quiet moment as the women took stock of the harvest — placing their hands on the doe, thankful for the sacrifice.

“Women tend to express a higher level of sentiment for the animal after the harvest,” Williams said.

The process, excitement, sense of accomplishment and gratification from women hunters are what makes it fun for Williams, he said. Only after were there smiles and posing for photos.

Williams and Hamlin then field dressed the doe and Lewis and Baca looked on, wanting to learn every nuance of the necessary chore. Hunting lessons get harder after the trigger is pulled, said Tanya Lewis.

After being mentored on her first hunt two years ago, there was no looking back for the single mom of three. “They all want to hunt,” she said. She failed to harvest a pronghorn on her first hunt, but was encouraged not to give up by her mentors.

“The first year I was introduced to hunting. The second year taught me how to harvest,” she said. “I fell in love with it.”

Bruce Salzmann, who is on the board of directors of Wyoming Outdoorsmen, mentored Lewis in her first harvest. He assisted her through the experience, including field dressing. It isn’t easy for Lewis, but she’s determined to learn the process and do it right.

She is a leading volunteer for the Sisters of the Sage, a group created by past participants of the Wyoming Women’s Foundation annual antelope hunt.

The mission of the foundation is to help women achieve economic self-sufficiency. And one way to do that is to help women learn to hunt, so they can bring nutritious meat home to their families, said Rebekah Smith, the organization’s director.

“Food security is an important part of family self-sufficiency,” she said. “The Sisters of the Sage hunts help women continue their hunting journey through mentoring and learning.”

The group, which formed organically, aims “to support one another in their quests to further develop their hunting skills,” Smith said.

For Lewis, it wasn’t just camaraderie and the joy of success that has driven her to help lead the Sisters of the Sage.

“When I saw women from all different aspects of life, learning together and just as scared as I was, it felt empowering. We learn everything from handling a gun to hunting, harvesting and processing,” Lewis said.

The First Hunt Foundation, Wyoming Outdoorsmen and the Wyoming Game and Fish Department combined to provide mentors for the hunt.

Tara Hodges, information and education specialist for the Wyoming Game and Fish Department, volunteers her time to mentor Sisters of the Sage hunters to process a deer and the importance of chronic wasting disease testing. Hodges is an experienced hunter and brings a wealth of information, from Game and Fish rules to the best way to skin a deer. At this point she’s the only female mentor. But that’s about to change.

Lewis, from Casper, will be taking on the task of organizing future events. And soon, the hunting mentors will all be female.

“Our goal is to make this a legacy event for the Sisters of the Sage,” Williams said. “Eventually it will be women mentoring women.”