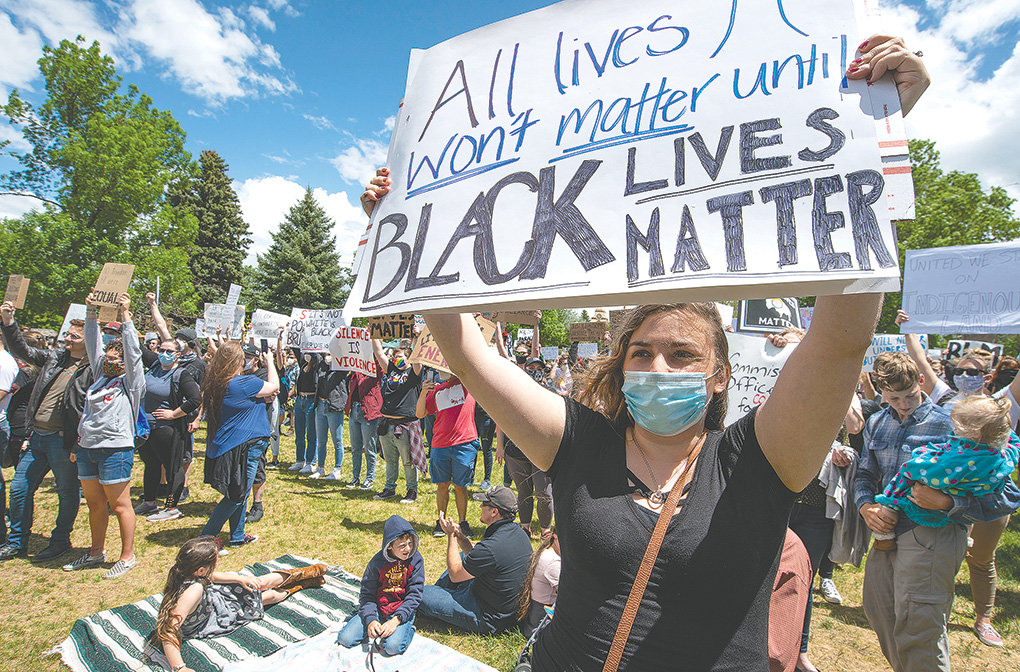 Area residents at a Sunday rally against racism raise their signs at Cody City Park. Hundreds of people attended the rally, with the event having been granted an exception to the state’s current 250-person cap on outdoor gatherings.
Tribune photo by Mark Davis 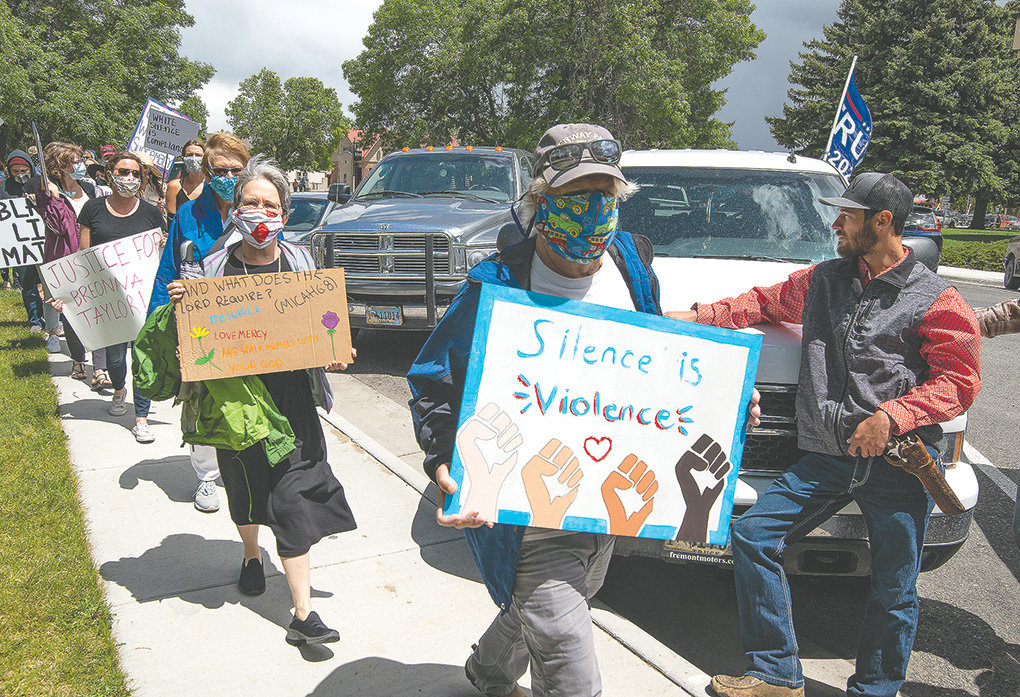 Dan VanSchoelandt leans on a truck with his hand on his pistol while watching participants in Sunday’s peace rally in Cody march past. VanSchoelandt said he came down to the rally after seeing the violence in other cities, but said he was not against the protest. ‘We’re not anti-protesters,’ he said.
Tribune photo by Mark Davis 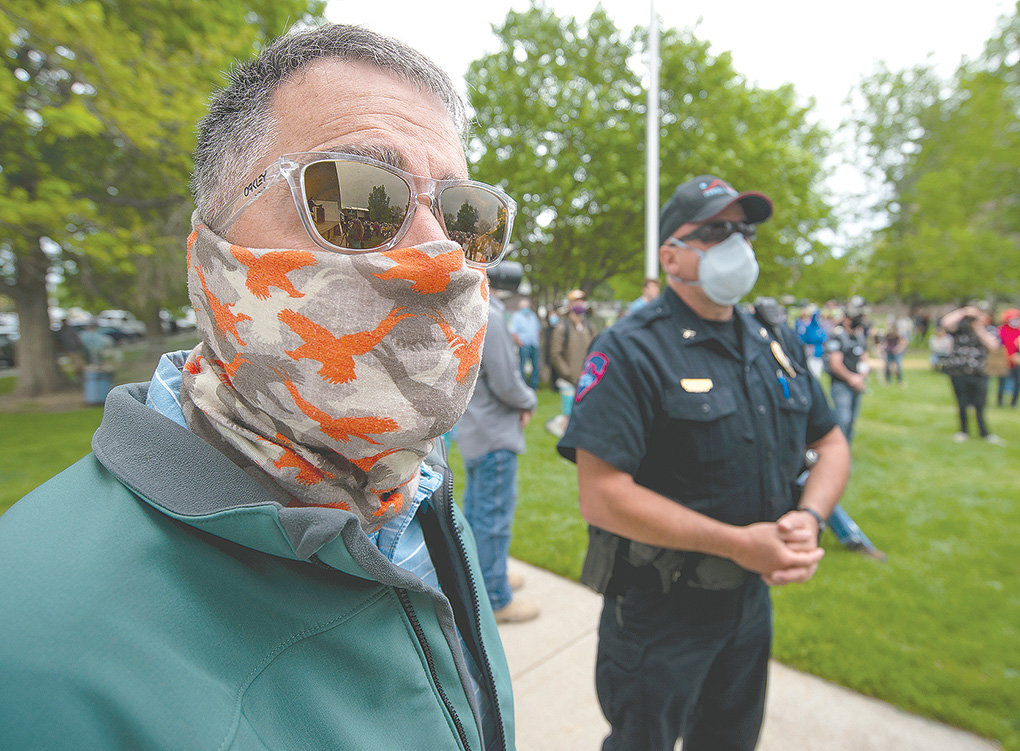 Through songs, speeches and a poignant 8 minute and 46 second period of silence — the length of time a police officer in Minneapolis kept a knee on the neck of a restrained black man — protesters made their message clear: Change is needed.

Event organizer Melissa Maier of Cody said the rally was organized to stand in solidarity with our people of color, to speak out against racial injustice and police brutality, and to offer education about how racism affects our community.

“The vast majority of the people in our community and the people here today are white people,” she said in opening remarks. “And as white folks, we have the opportunity, but also the responsibility, should we choose to use it, to leverage the privilege we were born with, to fight racism.”

Leaders from Cody and Powell — including Powell Mayor John Wetzel and Powell Police Chief Roy Eckerdt — were among those who attended the event.

“George Floyd did not deserve to die,” said Cody Mayor Matt Hall. He recited a slightly modified quotation from President Abraham Lincoln’s second Inaugural Address: “As a nation, our path forward needs to be with malice towards none, with charity for all, and with firmness in the right, as God gives us, to strive to bind our nation’s wounds, to care for those who shall bore the battle and to do all which may achieve a just and lasting peace, for our world, for our nation, for our community, and for ourselves.”

“I’m angry because George Floyd was in police custody. He was facedown in a street with handcuffs when he was murdered by a man wearing a uniform similar to mine. I’m angry and I’m ashamed,” Baker said. “Law enforcement has a lot of work ahead of us both here locally in Wyoming and, certainly, in major metropolitan cities across the country.”

There were some worries that violent protests seen in other states were coming to Cody. Many in the crowd were looking for buses carrying out-of-state agitators rumored to be en route to the gateway city.

Dozens of “de-escalators,” both on foot and on horseback, kept an eye on the rally. Flint Flesher helped organize many of them, who were identified by pink arm bands. “Everybody has a right to come here and speak their piece,” he said.

“I’m from Cody. I just don’t want anything bad happening here,” Flesher said. “All we’re doing is just trying to de-escalate anything that might come up.”

For the most part, de-escalation group members weren’t armed. But there were lots of guns being brandished on the scene: About two dozen area residents, many wearing Trump campaign hats and flying flags, patrolled the boundaries of the park carrying handguns and rifles, “ready to act” should the rally erupt in violence or property destruction.

Both carrying rifles, Derek Cordes and Josh Schatz of Cody stood and watched as protesters peacefully marched the park’s perimeter.

“We’re just making sure there isn’t any trouble. Just being prepared,” Cordes said, adding, “We don’t want anything happening in our town that’s happening around the world.”

He called the rally “ridiculous.”

“This town only has a handful of African Americans; I’ve seen more today than I’ve ever seen,” Cordes said.

Others, holding weapons, recorded videos of those in the march and made jokes as they walked by. Maier, the organizer, said attempts to intimidate marchers prior to the event may have kept some from attending.

“There was a lot of fear generated,” she said. “Some people were afraid to come.”

But she was extremely happy with the size of the crowd, estimated by Maier at about 500 people.

“I’m just, I’m just blown away,” she said. “I feel like Cody should be so proud of this representation today.”

During her opening speech, Maier spoke to the rumors of possible violence spreading through social media.

“We have the right to be here. The first Constitutional Amendment protects our right to free speech. But looting, destruction of property and violence are not protected under the law. So please, lawfully exercise your right,” she said. “While others may choose to go low, today, we choose to go high.”

There has been “Facebook outrage” against any number of local rallies over the last few years, including the Women’s March and the March for Science, Maier said prior to Sunday’s event, but “aside from revving car engines and some yelling from car windows, the rallies have been relatively uneventful.”

Also taking the podium were Dakota Russell, executive director of the Heart Mountain Interpretive Center, Mary Keller, professor of world religions and adjunct professor in the African American and Indian studies at the University of Wyoming, and John Boyd, executive policy adviser for Kanye West.

“Many people in Cody thought, what does it have to do with us? I say to you all today, if you’re a good person, it has a lot to do with you,” John Boyd said at the close of the rally.

The event lasted about two hours. Protesters and volunteers cleaned the venue of debris and escaped the rain soon after the closing statements.