Hideout Cattery is the lap of feline luxury

Cats, like people, all have their own personalities. And like people, they don’t respond well to stressful situations like being separated from their human families, being around strangers and …

Hideout Cattery is the lap of feline luxury 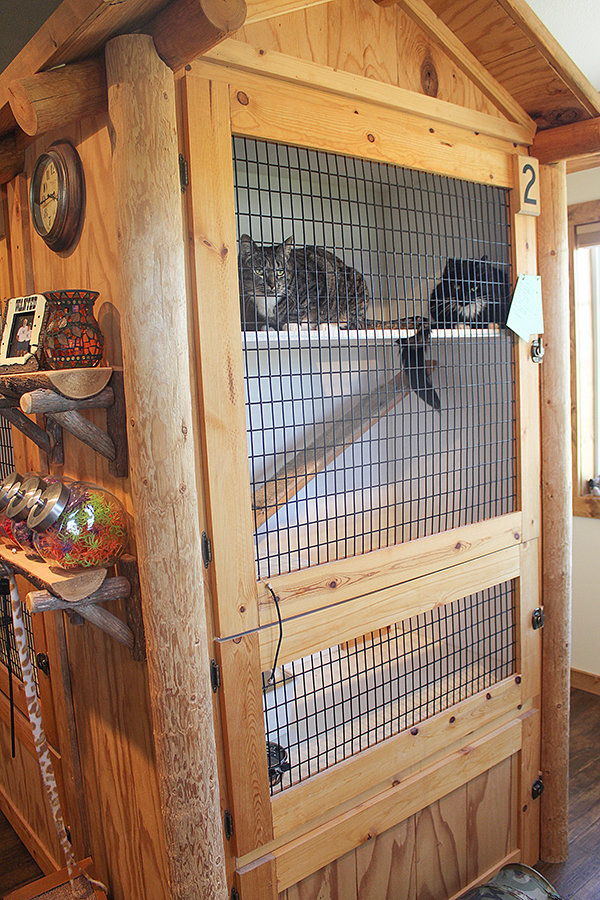 Two cats who are boarding long term while their owners are deployed lounge in a kitty condo at the Hideout Cattery. The sheets of paper to the right are feeding instructions and other notes.
Tribune photo by Connie Burcham
Posted Friday, June 25, 2021 8:05 am
By Connie Burcham

Cats, like people, all have their own personalities. And like people, they don’t respond well to stressful situations like being separated from their human families, being around strangers and acclimating to a new space to call home.

So what is a pet parent to do when life throws those situations at the family? Call Tricia Hunter.

Tricia and her husband, Barry, operate a cattery in Cody. But this isn’t just an ordinary run of the mill boarding facility that takes cats. It was built for cats. The entry way door opens onto a small vestibule and a second door opens into the cat space. The double doors prevent escapes.

“Because cats are fast,” laughs Tricia. She laughs a lot.

The idea of a cattery came to her when she was living in England. There, catteries are in every town, more common than kennels for dogs. Hunter visited several and knew that was what she wanted to do.

She had the background. She is a trained veterinary assistant, shelter manager, animal control officer and pet sitter. But it took a while to get the plan puuuurfected.

The couple was living in California where Barry, a engineer and builder, became fascinated with the idea and designed and built the Country Cattery. They sold that business and, after a short stint in Wapiti, moved to Reno, Nevada.

There, they leased a commercial building and installed 90 log cabin cat condos. It was dubbed the Cozy Cattery Boarding Resort Just for Cats. During the recession of 2008, they moved seven cabins from the building into their own home. It proved to be a blessing in disguise, because it turned out the pet owners liked having their feline family attended around the clock.

They got the chance to sell the home in 2014 and return to Cody, Barry’s hometown. There they built their dream home and that build included the Hideout Cattery.

Now there are the seven log cabin kitty condos in their own section of the house. It has an air exchange system that freshens the atmosphere every five minutes. It is climate controlled and the big windows fill the space with light. An air freshener plug in is designed to use feliway, a calming pheromone that mimics one a mother cat emits. The room also has calming, quiet music piped in.

But it isn’t all about remaining calm. Each cat has its inner kitten, and those rambunctious babies are given plenty of time to play. Every cat is allowed time to roam around the cattery accompanied by its housemate from the same family. They can climb on a specially constructed cat tree, sleep in its padded cradles, and look through the big window to watch birds, rabbits or any passing wildlife. Tricia spends this time in the cattery, often cuddling the cats.

“I’ve always been a cat person,” she says, again with that infections laugh.

It isn’t just locals who use the business, though. There are currently customers from Omaha, Nebraska, and another who is deployed with the military. Clients find the cattery on the internet and make arrangements to board their fur babies with the Hunters, often for a year or more.

The cats live happily in three-story condos, which have separate levels for the litter box, feeding area and a penthouse for snoozing and play.

Because cats are notoriously picky about their food, each human client brings feed or arranges for it to be shipped directly to the cattery for the length of the stay through services like Amazon or Chewy.

Tricia is adamant that would-be boarders come and tour the facility before they leave their beloved pet. It puts everyone’s mind at ease.

The other very strong suggestion she has is that they make arrangements early.

“If you think you’re going to travel, even if the dates aren’t firm yet, call me. I can pencil you in and we can adjust the dates if they change,” she said. The slots fill quickly. There are four kitty condos with long-term boarders, leaving only three open for short-term vacationers.