Wyoming will be entering its second season in which the state is issuing licenses to hemp producers and processors.

The crop is still highly regulated and remains in a niche market. That … 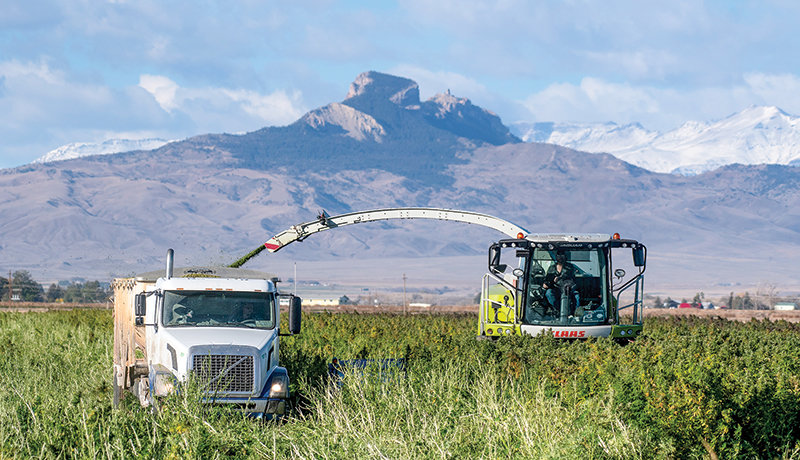 A hemp crop west of Powell was grown during the first season for the plant in the state. The harvest was late in the fall.
Tribune photo by Mark Davis
Posted Friday, March 19, 2021 8:10 am
By Kevin Killough

Wyoming will be entering its second season in which the state is issuing licenses to hemp producers and processors.

The crop is still highly regulated and remains in a niche market. That means there aren’t a lot of farmers trying it, and those that are endure a lot of trial and error.

Mother’s Hemp Farms owner Dave Tenhulzen said he planted 144 acres of hemp at two sites last year: one near Deaver and another just outside of Powell. The approximately 30 acres that were harvested near Powell produced about 90 tons of raw hemp.

However, the larger field near Deaver was a total loss as it tested “hot,” as they say in hemp lingo — meaning it came in over the maximum 0.3% THC limit. THC is the primary psychoactive ingredient in the cannabis plant and when the compound is present in hemp in higher quantities, the crop is treated as if it is marijuana and must be destroyed.

Last year, 28% of the hemp samples that were collected from across the state and tested by the Wyoming Department of Agriculture came in too hot. Derek Grant, spokesman for the ag department, said that figure is just an estimate, as some indoor growers are still submitting their samples for testing.

“For the first year, I thought it was pretty good,” Brown said during an online hemp workshop in January.

In 2020, the state issued 28 licenses to grow hemp, which encompassed 1,058 acres of field production and 18,150 square feet of greenhouse production.

From the field production, 873 acres were planted and 788 acres harvested.

“It sounded for the most part that [the season] was fairly successful, across the state,” Vardiman said, “but it’s still pretty small scale.”

Vardiman agrees with Brown that the 28% fail rate on the state’s sample tests wasn’t too bad and demonstrates some potential to produce the crop within the limits the state requires, which follow those of the USDA.

“There is some hope out there,” the educator said.

“It’s going to take a while to develop and become solid,” he said.

Vardiman added that the fiber processing, which would go into a variety of construction and textiles really has no market at this time, but food and CBD do have improving processing capacity.

“We’ve made a step in that direction,” Vardiman said.

He said producers who risked the uncharted hemp waters last season were testing varieties, which is important. Identifying the varieties that stay below the 0.3% THC threshold will make the farmers’ crops more successful.

One question that remains is how much the market can bear and whether Wyoming can compete in that market.

“That’s the driver for all crops. The reality of it, here in Wyoming, we’re at that mercy. And so if we can have a market to sell into, we have a successful crop venture,” Vardiman said.

Grant said it’s too early to tell if the state will see a growth in applicants. Renewals are typically submitted in December — though they can come in at any time — but new applicants usually start submitting theirs in spring.

It takes about a week or two for the paperwork to be processed, depending on the amount of documentation involved. The application process, Grant said, is the same this year as last. However, he said there could be changes at the USDA level, which would result in changes to Wyoming’s process.