“What you are doing here is drawing that line in the sand to say that never again will there be something like what happened at Heart Mountain and other relocation camps,” said Norman Mineta, former U.S. Congressman and former U.S. … 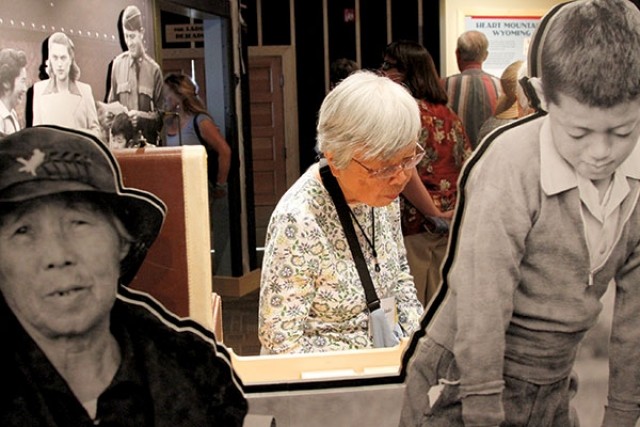 Shizuiko Morita of Virginia, a former internee at the Heart Mountain Relocation Center, is framed by historical, life-sized photos of internees while she reads information on another display at the new Heart Mountain Interpretive Learning Center. The center will be open daily from 10 a.m. to 5 p.m. through September.
Tribune photo by Ilene Olson
Posted Tuesday, August 23, 2011 4:19 pm
By Ilene Olson

Laughter and humor were common during events commemorating the new Heart Mountain Interpretive Learning Center over the weekend, but the overall theme was very serious: Never again.

“What you are doing here is drawing that line in the sand to say that never again will there be something like what happened at Heart Mountain and other relocation camps,” said Norman Mineta, former U.S. Congressman and former U.S. Transportation Secretary — and a former internee at the camp — during the grand opening ceremony Saturday morning. More than 1,200 people attended the ceremony.

Never again should American citizens be singled out because of their nationality, uprooted from their homes and forced to live in camps behind barbed wire.

Never again should they be treated with suspicion and hate because of the color of their skin or the slant of their eyes.

Those and many other injustices were experienced by Japanese-Americans — many of whom were second-generation Americans — after Japan’s World War II attack on Pearl Harbor, Hawaii, on Dec. 7, 1941.

Regardless of how long they had been in the United States, 120,000 Japanese-Americans living on the West Coast were considered a threat to national security and sent by railroad to 10 relocation camps in the interior of the country.

Heart Mountain Relocation Camp, located between Powell and Cody, was home for up to three years for a total of 14,000 Japanese-Americans, ranging from infants to great grandparents. They lived in barracks, surrounded by barbed wire and watched by armed guards in towers.

About 250 former internees, most interned as children and young adults, gathered in Park County over the weekend with family, friends, organizers and the local community for three events celebrating the opening of the Heart Mountain Interpretive Learning Center.

A Pilgrimage Dinner at Park County Fairgrounds Friday evening, attended by 740 people, focused on lessons learned from the past; the dedication ceremony Saturday morning celebrated the opening of the Heart Mountain facility, and a banquet Saturday evening at the fairgrounds, attended by more than 800, provided guidance to prevent similar abuses of civil liberties in the future.

Brokaw, author of “The Greatest Generation,” praised the courageous service of Japanese-Americans during World War II while the U.S. government imprisoned their families.

Brokaw cited the example of U.S. Sen. Daniel Inouye, D-Hawaii, who, as a 17-year-old, provided first aid for wounded servicemen and other victims at Pearl Harbor. As Japanese planes flew over his house, he raised his fist, cursing the Japanese pilots.

Two years later, when Japanese-Americans were allowed to serve their country in World War II, Inouye served with the 442nd all Japanese-American Combat Team. While fighting in Germany, he was severely wounded and nearly died. He lost his right arm, and with it, his dreams of becoming a surgeon.

Despite Inouye’s sacrifices, when he returned to his own country, he often was treated with discrimination and hatred, Brokaw said.

Other speakers included Mineta and former U.S. Sen. Alan Simpson of Cody. Both were Boy Scouts during World War II — Simpson with a troop from Cody, and Mineta with Troop 333 in the Heart Mountain Relocation Camp. When the two troops began meeting together, the two boys formed an unlikely friendship that lasted a lifetime.

“Norm Mineta and Al Simpson are both men of exceptional intelligence, principle courage, idealism and honesty,” he said. “They both have demonstrated over a lifetime of leadership that partisan affiliation, geographic loyalties and ethnic identity ultimately always come in second place to their shared and deep commitment of country and to what is right and what is just.”

Simpson recalled seeing signs in store windows in Cody during World War II that read, “No Japs allowed,” and, “You killed my son in Iwo Jima.”

“This was confusing stuff for a 12-year-old,” he said. Today, you’ll see signs saying, “Welcome to all the generations of Japanese. We’re proud of what you’ve done.”

But that change wasn’t immediate, he said, noting that, after the war, farm land in the Heart Mountain area was given to GIs who had served in the Armed Services, and many of them were not sympathetic of the Japanese.

Simpson said five local people — Chester and Mary Blackburn, LaDonna Zall, Dave Reetz and Pat Wolfe — were the first to say, “We need to commemorate this.”

Despite initial resistance, particularly from veterans’ organizations in Powell and Cody, “They hung on, and they’ve succeeded, and you’ve succeeded ... Those people have lit the fire.”

At Saturday’s celebration banquet, four panelists — Mineta; Judge Lance Ito of California; Irene Hirano Inouye, president of the U.S.-Japan Council; and Melba Vasquez, president of the American Psychological Association — answered questions from the audience about how to prevent repeating civil liberties violations such as those suffered by Japanese-Americans during World War II.

Mineta said it is important for Asian-Americans to volunteer for public service and run for local and state government offices.

“Always remember where you came from and speak with pride about those elements,” he said. “Tell that story over and over again.”

When asked about the appropriate way to respond to a crisis from a psychological point of view, Vasquez said it’s important to control thoughts and emotions when making decisions.

“You behave worse when you’re scared, right? Society does the same. That leads to violating civil rights,” she said. “Some research shows that people who stand up for justice tend to be people who have experienced injustice.”

Hirano said the fact that the Interpretive Learning Center has been embraced by so many institutions in Cody and Powell, as well as national and international organizations, bodes well for its continued success. It is important to continue to share that history, and to collaborate with other institutions and organizations with similar missions.

“We can tell our story and that of other Americans,’ not only Heart Mountain history, but also our own Japanese-American experience.”

Ito, whose mother was an internee at the camp, said, “We can do a better job of educating the community about the wrong that was done to us.”

Ito said he has a panoramic photo of Heart Mountain in his courtroom.

“It’s there to remind me of one very, very important lesson,” he said. “That is, one needs to pay attention. What happened (during World War II) is the result of good people not paying attention ... You can never let your guard down ... That must never be repeated.”

During Saturday’s grand opening ceremony, Mineta cautioned that history can repeat itself.

“I know from my own work that it can happen,” he said. “It came very close on Sept. 11, 2001. I was secretary of transportation. I grounded all the airplanes, and the whole issue about how do we get the airplanes back up, and what’s the regimen about security that would be performed when the airplanes went back up. “There were a lot of people who were saying, ‘Don’t let Middle Easterners or Muslims back on the airplanes.’ And they were even talking about internment and rounding them up ...”