“It was meant to be just a fun little change of pace, and now it’s kind of transitioned,” said Brandon Mason, their dad. “I don’t know if they’ll ever want beds again.”

The idea came about as Brandon researched ultralight … 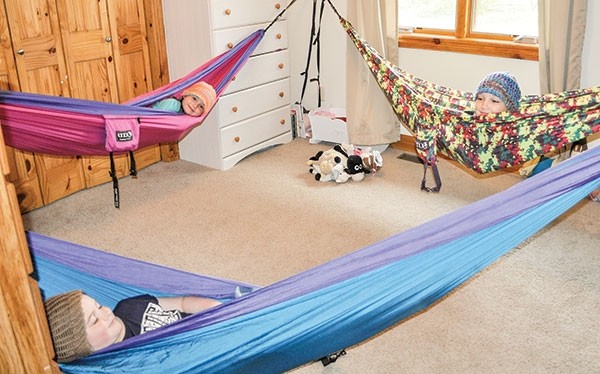 The Mason kids started sleeping in hammocks last summer, and now prefer their hammocks to beds. Sisters Lily, 7, (foreground), Faith, 6, (left) and Danica, 10, (right) share a room. Instead of making beds in the morning, they simply fold up their hammocks, leaving the bedroom open for the kids to play. Lily made hats so the girls’ hair doesn’t get staticky.
Tribune photos by Tessa Baker
Posted Monday, May 1, 2017 3:01 pm
By Tessa Baker

Something is missing from the Mason kids’ bedrooms: Beds.

“It was meant to be just a fun little change of pace, and now it’s kind of transitioned,” said Brandon Mason, their dad. “I don’t know if they’ll ever want beds again.”

The idea came about as Brandon researched ultralight backpacking gear for his job with Eastmans’ Hunting Journal. He read a lot about hammocks and tested one out during a backpack trip in the Big Horns, and had a great night’s sleep.

So when it came time to rearrange the kids’ bedrooms in July, Brandon pitched a different idea to them: Hammocks instead of beds.

“After we got them set up, I said you have to be patient, because you have to learn how to sleep in a hammock, to really get the full effect,” he said.

He told the kids to try it for a week, and if they were uncomfortable, then they’d put the beds back in their rooms.

“After the first night, they didn’t want to go back to beds,” Brandon said.

Each child prefers sleeping in a hammock.

“We stayed in a hotel recently, and they all woke up saying how much they couldn’t wait to get home to sleep in their hammocks,” Brandon said.

After sleeping in a regular bed at the hotel, “I got stiff,” said Lily. Her sisters agreed.

“The hammocks are nicer,” added Hunter.

The switch also has made the kids’ rooms much more spacious.

“The main feature I like about the hammocks is that they can fold them up and then they have the whole area to play in,” said Lori Mason, their mom.

A bed often takes up most of a bedroom; the hammocks take up little space and easily unclip, leaving the kids’ bedrooms open during the daytime.

“Instead of having a bed to make, they’ll get up and fold their blankets and unclip the hammock from one of the wall hangers and hang it on the opposite side so it just hangs there like a wall decoration basically,” Brandon said.

The three girls share a room, and when their hammocks are set up at night, they form a triangle. In the past, they had a bunk bed.

A common question the family gets is whether the hammocks hurt their backs or necks. The answer is no.

“It’s really good for your joints, because you don’t have all that pressure on your shoulders or neck,” Brandon said. “It just contours to your body.”

“I like it because when I lay on my shoulder, there’s nothing really there,” Hunter said.

They’ve also heard concerns that the kids will be hunched up by sleeping in the hammocks.

“That’s just not a fact,” Brandon said. “You’re not hunched up from sitting in a recliner when you’re bent in a different shape.”

These hammocks are based on ancient designs — not like the common hammocks with bars in the end that most people think of.

“Historically, [hammocks] were shaped like the ones the kids are sleeping in,” Brandon said. “But people in Britain, from a marketing standpoint, didn’t understand how that would work and it looked like you’d just be wrapped up in fabric.”

British businesses worried people would be claustrophobic, so they changed the design and put dowels on the ends, making it look more like a bed. That idea made it over to the United States, he said.

“That’s the worst design for a hammock, but it was simply from a marketing standpoint,” Brandon said.

Today, companies that specialize in outdoor gear have gone back to the original designs for hammocks.

To hang the hammocks in a home, you have to find a stud in the wall, and use a pretty big lag screw to support it, Brandon said.

“They’ll hold up to 400 pounds,” he said. “Two average-sized adults can sit in them together if you want.”

The hammocks make good chairs, too.

“That’s kind of the cool thing about them,” Brandon said. “It’s not just a bed, but you can sit in them perpendicular to the hammock and then you have sort of a rocking chair.”

The family put anchors on either side of their fireplace, so “you can snap a hammock in there and read by the fire if you want,” Brandon said.

The one downside is that the anchors must go into the walls.

“It’ll leave a dime-sized hole in your wall, so you’ll have to do some mudding, texturing and painting to seal it,” he said.

If families decide to go the hammock route, Brandon said there are some tricks you have to play around with — what height to hang the anchors, and how tight or loose you make them.

“If you get it too tight, then it’ll be like you’re wrapped up in a sausage casing, and you don’t want that,” he said. “You have to have sort of a smiley face look to it.”

Each of the Mason kids’ hammocks are adjusted to their personal preferences.

They also have figured out how much insulation they want. It’s important to use blankets or a liner to stay warm in the hammocks.

“They’ve got it down to a science now,” Brandon said. “They have a big blanket they’ll drape across the hammock and then sit in it and turn and wrap themselves up into a blanket, so they’re covered on all sides, and then they sleep pretty good that way.”

The kids got to choose their own colors and designs.

“There are so many brands out there now,” he said. “We picked Eagle Nest Outfitters for theirs, but there’s tons of them.”

The hammocks are easy to clean, and don’t require as much laundry as a whole set of bedding. They hand-wash the hammocks and hang them to dry.

“They’re made of synthetic ultralight fabric, so they’re made to dry really fast,” Brandon said.

Hammocks range in price, but you can get a good quality hammock, wall anchors and straps for under $100.

Brandon is looking at making portable hammock stands so they can easily take the kids’ hammocks along when camping or traveling.

“Just take your hammock and hammock stand, and you’d be good to go,” he said.