The ribbon is cut and the many years of work on the Cody Firearms Museum renovation is finally complete. 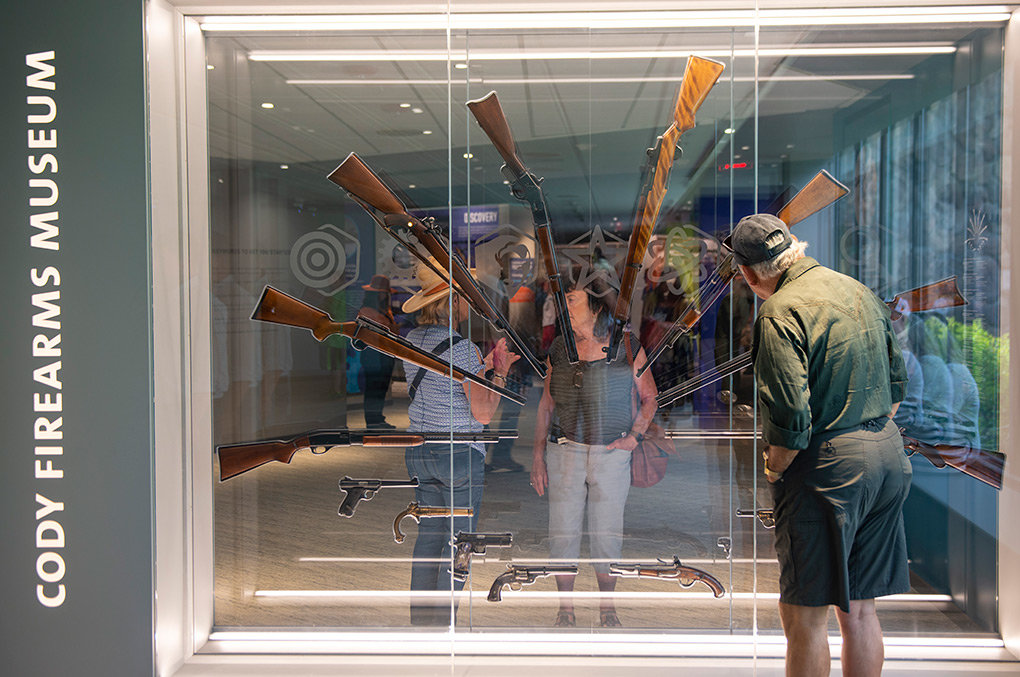 Visitors check out a display near the entrance of the newly renovated Cody Firearms Museum during Saturday’s grand opening at the Buffalo Bill Center of the West.
Tribune photo by Mark Davis
Posted Tuesday, July 9, 2019 8:15 am
By Mark Davis

The ribbon is cut and the many years of work on the Cody Firearms Museum renovation is finally complete.

Hundreds gathered at the Buffalo Bill Center of the West on Saturday for a celebration to get their first glimpse of the facility’s two floors of firearms history and future. Lines formed at mechanical and digital interactive displays. Every corner of the 40,000 square-feet was packed with curious visitors.

Peter Siebert, the Center of the West’s president and CEO, was happy with the results.

“We’re so thrilled. I mean this is awesome. I’ve seen so many people with so much enthusiasm,” he said. “It’s wonderful to see so many people pumped up about the museum.”

Siebert said there’s an adage that says there are two things that never change: cemeteries and museums. However, “if you came here 20 years ago, you’d better come back because you’re going to see something completely different,” he said.

Siebert’s goal is to increase traffic by making exhibitions so grand that visitors will want to spend multiple days at the center.

“As we continue to make our product stronger and stronger, we want people to realize they need to spend more time here,” he said.

Siebert is most impressed with the attention to historical context at the renovated firearms museum. The more than 10,000 artifacts on display wasn’t enough for the team: They reached for a new depth, Siebert said.

“When you have a museum with huge collector appeal, the tendency is to put everything out and call it a day. The challenge is to put context there — a back story to [say] here’s what this tells you,” Siebert said.

The museum offers something for everyone, from extreme gun enthusiasts to those with no experience with firearms. Displays don’t glorify firearms, but instead look for a clear path of the effects of guns in culture, from beginning to future development. Collections are also inclusive of all firearms made around the world, not just western firearms, “what one would expect from the Center of the West,” Siebert said. A special display even explores the future of 3-D printing of guns.

Project manager John Gallagher was glad to see the doors reopen. The museum closed last August for the renovation to begin, but Gallagher said plans have been ongoing for the past 5 years.

“I’m glad it’s finally open,” Gallagher said while strolling through a special collection of weapons revered for their fine craftsmanship and artwork in an area affectionately known as “Ashley’s closet.”

Museum curator Ashley Hlebinsky was relieved the project is complete and pleased with the results. But there is no rest in sight. Today (Tuesday) she flies to Washington, D.C., as the Wyoming representative of The D.C. Project, a nonpartisan initiative to bring 50 women to Washington (one from each state) to dispel common myths of gun ownership.

“Because I’m a historian, I’m going as that middle ground person and will talk about gun legislation,” Hlebinsky said.

But after leading multiple tours on Sunday, she planned to celebrate. “It’s not Miller time, it’s whiskey time,” she joked.