“I have nothing against CAD [computer aided design],” Rullman, an … 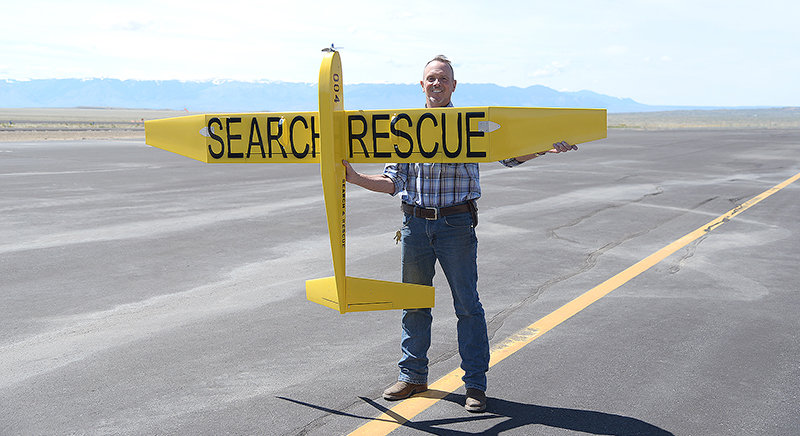 At the Powell Municipal Airport, Thomas Rullman, CEO and president of GT Aeronautics, displays the GT-100HL that Park County Search and Rescue is hoping to use in its operations. Park County Weed and Pest is using the same model of UAV for mitigation of leafy spurge.
Tribune photo by Kevin Killough
Posted Thursday, June 10, 2021 8:20 am
By Kevin Killough

“I have nothing against CAD [computer aided design],” Rullman, an aeronautical engineer and former commercial pilot, explains. “It’s just that some engineers spend so long trying to get the software to do what they want, it takes them twice as long to do the drawings. I just want to get them done.”

At the company’s headquarters in a hangar at the Powell Municipal Airport, he flips through a thick binder of design drawings on graph paper for the prototype of the GT-100HL. It’s a fixed-wing UAV that GT Aeronautics designed for operations under Federal Aviation Administration regulations — and the drawings look as precise as any computer printout.

First responders across the country — including Park County Search and Rescue — are looking at incorporating UAVs, also known as drones, in their operations. Manned aircraft are much more expensive and riskier to operate, especially in dense and mountainous terrain, than these small, unmanned aircraft.

Modern drone technology is quite capable of transmitting clear images of the terrain below to pilots miles away, which makes them capable of scanning hundreds of acres for people in need of help.

Park County Weed and Pest is also incorporating the aircraft into the efforts to locate invasive species.

Unlike rotary UAVs with spinning propellers, fixed-winged aircraft must keep moving to stay airborne. With two cameras mounted under the wings, one points forward and the other points toward the ground. The pilot can then avoid obstacles while others examine images of the terrain.

The aircraft is launched by hand — quite literally thrown into the air. Though it’s not a vertical takeoff aircraft, Rullman said the GT-100HL has a climb speed that allows it to launch in a very tight space, such as a heavily forested area where search and rescue operations often take place.

GT Aeronautics also has a mobile command center it can use, meaning the aircraft can be launched near the search location and cover a large radius quickly.

The concept will allow search and rescue operators to command the mission, while the pilot focuses on flying the UAV. In the mission planning room, the responders can have multiple eyes on the images coming from the UAV, which increases the chance they’ll spot whatever they’re looking for on the ground, and they can give the pilot instructions on where to fly the drone.

The same principle applies to the mobile command center.

Rullman has another prototype UAV called the Tacamo, which can be fitted with droppable search and rescue pods. The brightly colored containers can be packed with food, water, radios, first aid supplies, or cellphones. They can then be dropped from the aircraft over the people who need the supplies.

The pods have a drag chute that pops out, which is different from a parachute. It’s not designed to slow the fall, because you don’t want the pods to drift in the wind. The goal is to have them land near the targets. The chute just helps slow the forward movement and prevents the pod from punching too deep into snow when it lands.

Rullman said a recent helicopter search and rescue operation in Wyoming dropped a radio to some people who needed rescue, but they weren’t able to find it.

“Poof. It just disappeared in the deep snow,” Rullman said.

GT Aeronautics got its start developing UAVs for the military, but Rullman said the world of competitive Department of Defense contracting isn’t always helpful to small businesses.

With an eye now toward commercial and civil applications, Rullman replaced the missile launchers with the pods.

Besides helping rescue people in the wilderness, another potential application for GT Aeronautics’ UAVs is helping to mitigate invasive species.

Rullman’s team is going out this month to seek out leafy spurge in the North Fork Valley near Wapiti as part of an operation by Park County Weed and Pest.

The plant is a particularly insidious species, producing a sap that’s toxic to some animals and humans, producing blisters, skin irritation and swelling.

For a couple decades, Weed and Pest has been battling the plant in the irrigated areas of the lower valley. They know rains send the seeds flowing downhill, so there should be patches of spurge in the upper valley. Finding the species over the wide area is the hard part.

Fortunately, the plant has a distinctive color that makes it easy to spot, especially from the air.

Much of the search will be north of the North Fork Highway, along about a 5-mile stretch that encompasses 11 square miles. GT Aeronautics will take video, which will be examined closely after the flight to identify where the patches are located. Then, Weed and Pest crews can go out to specific spots to perform mitigation.

“That is a way better use of resources than just walking it,” McKinney said.

With a two-hour flight time the GT-100HL will be able to cover a lot of area fast. In some areas with dense trees or tight terrain, GT Aeronautics will use a DJI Phantom quadcopter.

Being the first effort by Park County to utilize UAVs in the fight against leafy spurge, there are a lot of unknowns to contend with. Numerous factors, such as shade and precipitation, impact when the plant’s color will make it easiest to spot. The weather itself will also influence when the flights will produce the best images — or when it’s possible to fly at all.

“Because it’s new for us, using this technology with this particular species, it’s going to be a learning experience for us as well,” McKinney said.

McKinney said the plant has a negative impact on ecosystems, which then harms Wyoming’s outdoor recreation and agriculture. With 4.5 million acres to cover in Park County alone, McKinney said UAVs may prove an invaluable tool in the effort to mitigate leafy spurge and possibly other invasive species.

Besides designing the UAVs, Rullman manufactures them at the Powell airport using techniques he developed himself.

The challenges to make them viable for these applications has little to do with the technology, Rullman said. Regulations remain one of the more difficult barriers to overcome.

For example, Federal Aviation Administration regulations limit UAVs to flying no higher than 400 feet above the ground and within line of sight of the pilot in command or a visual observer.

The FAA gives first responders some leeway with the rules, but the standard limitations make most commercial applications unworkable.

The FAA is still trying to figure out how to incorporate UAVs into the national airspace. Manned aircraft cost more than cars, meaning only serious pilots are populating the skies. The existing FAA licensing system worked well for many years.

When toy drones came on the scene, the administration was faced with regulating pilots flying aircraft costing no more than a laptop and requiring no more training to fly than a remote-controlled car. While the regulations work well for toy recreational drone flying, professionally operated commercial UAVs are flying into some difficult barriers.

“All these organizations can use this technology,” Rullman said. “And the professional technology is perfectly capable of flying beyond line of sight without any issues whatsoever. We’re not kids with toys.”