Grizzlies are ranging further afield and conflicts are rising, but sides disagree on why

It’s undisputed that the number of conflicts between grizzly bears and people are on the rise in northwest Wyoming, with bears roaming further and further from their core habitat in and around …

Grizzlies are ranging further afield and conflicts are rising, but sides disagree on why 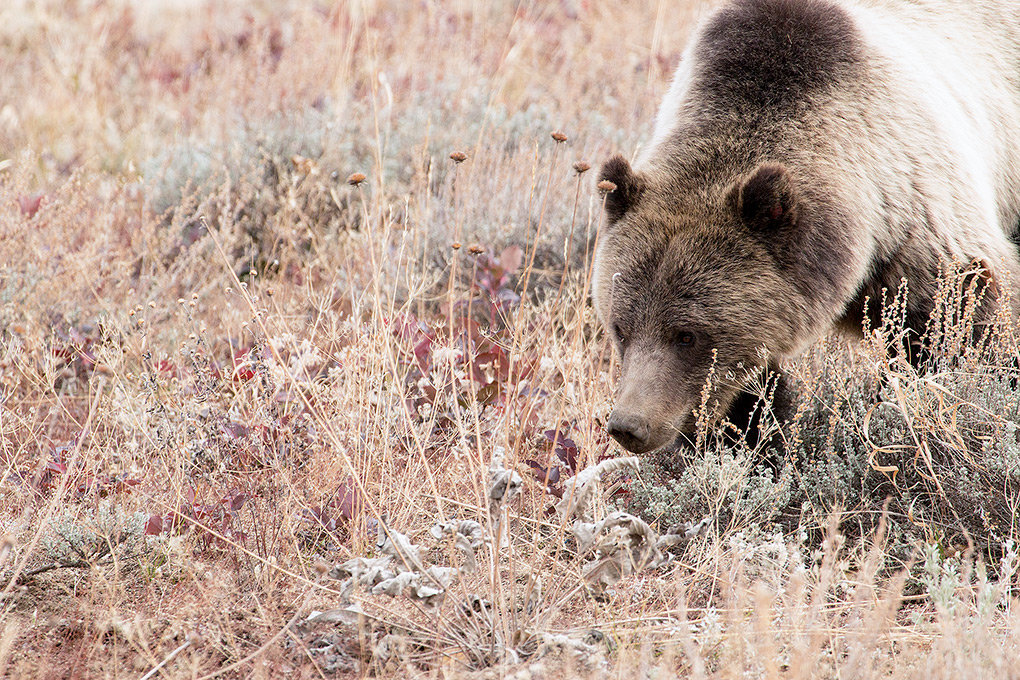 A grizzly bear — one of more than 700 in the Greater Yellowstone Ecosystem — forages for a meal in Grand Teton National Park. The current method of estimating the number of grizzly bears was designed to be conservative. The Wyoming Game and Fish Department is in the process of conducting its own count.
Photo courtesy National Park Service
Posted Thursday, June 20, 2019 8:30 am
By Mark Davis

It’s undisputed that the number of conflicts between grizzly bears and people are on the rise in northwest Wyoming, with bears roaming further and further from their core habitat in and around Yellowstone National Park. But why the bears are spreading out of the so-called “demographic monitoring area,” or DMA, is a matter of debate.

The Wyoming Game and Fish Department says the increased conflicts are a sign that the DMA is full and that bears are being pushed out into less desirable areas — such as the sow and two cubs that reached Byron last year.

“The DMA was identified as a large enough tract of contiguous habitat to maintain [Greater Yellowstone Ecosystem] grizzly bears in perpetuity,” Brian Nesvik, director of the Wyoming Game and Fish Department, told a congressional committee discussing proposed legislation called the Tribal Heritage and Grizzly Bear Protection Act earlier this month. “However, because the core of the population has nearly achieved density dependence, grizzly bear distribution has extended far beyond suitable habitats.”

Some scientists and bear advocates, however, don’t see it that way.

Barrie K. Gilbert, a conservation ecologist and emeritus faculty at Utah State University, told a House committee that the issue isn’t that the grizzly population is growing. Instead, he said grizzlies are expanding their territory due to a lack of food inside the suitable habitat set aside in the DMA.

“Just because grizzlies are expanding their range further from the protected park does not indicate that there is a surplus available for legal killing,” Gilbert said. “Rather, an interpretation of lowered density because of an impoverished food base is more likely.”

The actual number of grizzly bears in northwest Wyoming is a question that’s front and center of the debate over whether the species is recovered and should be removed from federal protections under the Endangered Species Act.

The official number cited by most is an estimate generated by a counting system known as the Chao 2 method.

The current estimates rise and fall depending on many factors. Infanticide — adult grizzlies killing cubs — is a large contributor; conflicts with people and livestock are another.

“That was part of the reason for developing the DMA,” said Dan Thompson, large carnivore program supervisor for the Game and Fish. “Mortality was being viewed as inflated due to higher conflict potential and mortality risk in human-dominated landscapes outside of recovery areas.”

The Chao 2 estimate is purposely conservative, which previously suited scientific efforts in recovery.

However many grizzlies there are in northwest Wyoming, the bears have spread well outside the boundaries of the designated habitat in DMA, which has resulted in more conflicts with humans and agricultural operations.

Further, since 2010, there have been seven human deaths in the Greater Yellowstone Ecosystem caused by grizzly bear attacks. From the mid-1980s to 2010, there were none.

“These unfortunate events are the result of more bears in new places,” Nesvik said.

Wyoming does the work to resolve conflict resolutions, pays the price for management, but all decisions are made on the federal level while the species is protected under the Endangered Species Act.

In 2018, the Game and Fish — in cooperation and with oversight from the U.S. Fish and Wildlife Service — “lethally removed” 32 grizzly bears in conflict situations. Five grizzlies have already been euthanized this year, according to the U.S. Geological Survey: one inside the DMA and four outside the boundary. Another three grizzlies were killed on the road in automotive accidents.

As part of ongoing efforts to monitor the population of grizzly bears inside the ecosystem, the Game and Fish is conducting capture operations in northwest Wyoming which began this spring and will continue through early fall.

“Information obtained through these efforts is used to assess the status and health of grizzly bears in the ecosystem and provides insight into population dynamics critical to demonstrate the continued recovery of the Greater Yellowstone population,” the department said in a release.

It will be up to the Interagency Grizzly Bear Committee to decide whether to abandon Chao 2 in favor of a different method.

The committee was formed in 1983 to help ensure recovery of viable grizzly bear populations and their habitat in the lower 48 states through interagency coordination of policy, planning, management and research. It consists of representatives from the U.S. Forest Service, the National Park Service, the U.S. Fish and Wildlife Service, the Bureau of Land Management, the U.S. Geological Survey and representatives of the state wildlife agencies of Idaho, Montana, Washington and Wyoming. Canadian Wildlife Service and Native American tribes possessing grizzly habitat have been involved.