As a nurse, Misti Asher has often gone beyond the necessary to care for her patients. But when an 8-year-old student at Southside Elementary School came to her office Sept. 15, complaining he just … 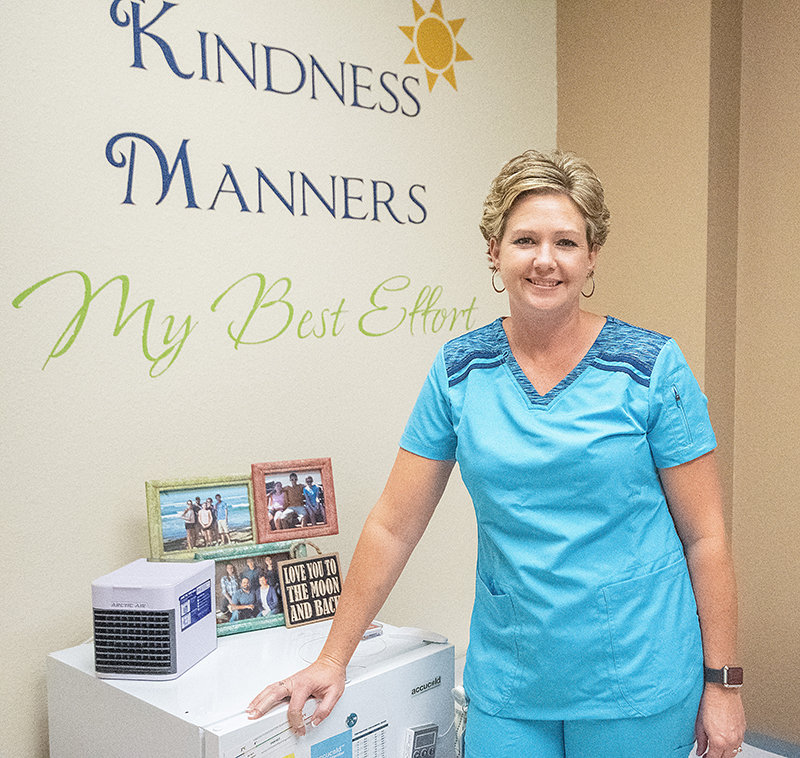 Misti Asher, school nurse at Southside Elementary School, solved the mystery Sept. 15 of why an 8-year-old student felt ill. In doing so she may very well have saved his life.
Tribune photo by Carla Wensky
Posted Thursday, October 8, 2020 8:20 am
By Connie Burcham

As a nurse, Misti Asher has often gone beyond the necessary to care for her patients. But when an 8-year-old student at Southside Elementary School came to her office Sept. 15, complaining he just felt ill, it was her tenacity in advocating for care that may very well have saved the student’s life.

The student came into her Southside office early in the day feeling poorly, but Asher was at another school at the time. The student rested in the office, even napping a little. But he returned after lunch, feeling worse. His respirations were not normal and the mystery caused Asher, a 1999 graduate of the Northwest College nursing program, to look deeper into the problem.

“I couldn’t put my finger on it, but I knew something wasn’t quite right,” she said.

Because the student had labored breathing, Nurse Misti, as she is known, consulted with another district nurse. The pair determined the student needed to see a doctor.

Because his grandmother was out of town, the student was staying with another family member. When the guardian came to school to pick the child up, they mentioned how much water he had been consuming.

With that added symptom, Asher consulted another district nurse about the case; they suspected diabetes and decided action had to be taken right away. Asher advised the family caring for the child to take a glucose test. Because another family member is diabetic, a glucometer was available to test blood sugar levels. The test returned very high numbers.

The family caring for the child suggested they would go to the walk-in clinic, but Asher was adamant they take the student to the emergency room.

From Powell Valley Healthcare, he was transferred to Billings for care, where he remained four days, getting his blood sugar and pH levels stabilized. The doctors determined he had Type I diabetes, previously undiagnosed.

“She caught the fact that my grandson has diabetes,” said his grandmother, Marcie Ray. “She literally saved his life. She’s an angel.”

Asher said there were angels involved, but she wasn’t one.

“I also rely on the other nurses,” Asher added. There are four nurses in the school district.

“I’m so thankful to have them,” she said. “It’s extremely important that we have these different backgrounds and experience.”

The boy’s grandmother, however, stressed the key role Asher played.

“She caught it with his breathing and other signs,” Ray said. “I just want to thank her for catching it and pushing to get that test done. The only description for her is ‘angel.’”

Asher monitors the student after each meal at school now and things are on a far more even keel than on that frightening day not so long ago.

“I’m thankful I was able to get him to where he needed to be,” Asher said.

Superintendent Jay Curtis also recognized the key role Asher played, calling her “an amazing gift to our district” and said she saved the child’s life.

He said the state funding model does not provide for the nursing staff that Powell schools have, but the board has been supportive for funding nurses. Another employee without a medical background could have mistaken the symptoms for another ailment, Curtis said, but nurses recognized the seriousness of the child’s condition.

“Had you not, as a board, supported having the nurses that we do, we would have had at least one child lose their life,” he said last month.

The Park County School District No. 1 Board of Trustees will recognize Asher during its meeting Tuesday night.

In a letter to the board, Southside Principal Scott Schiller commended Asher and extended his appreciation to the district’s nursing staff, Superintendent Curtis, nursing supervisor Ginger Sleep and the school board “for the nurses they have hired and placed around the district to help keep our kids healthy and safe.”

“This life-saving moment is one more instance of how PCSD#1 is Driven by Excellence, and keeps their focus on ‘doing what’s BEST for kids!’” Schiller wrote.