Gov. Mark Gordon announced today that he is extending the state’s current COVID-19-restrictions through the end of April, while adding a new requirement that anyone who enters Wyoming from … 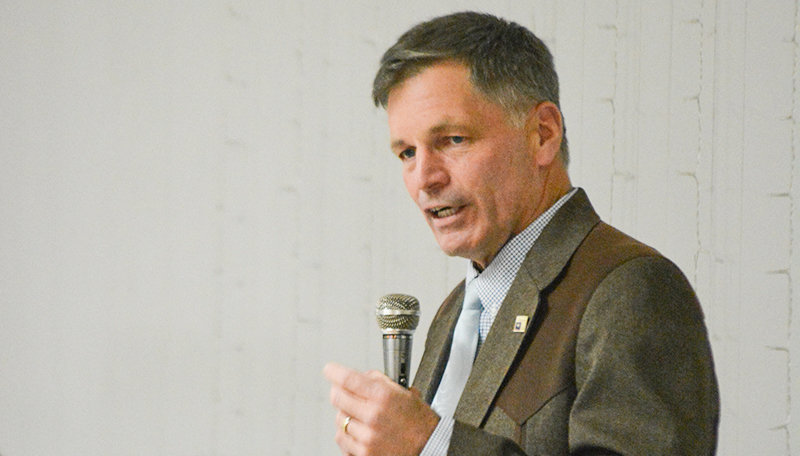 Gov. Mark Gordon announced today that he is extending the state’s current COVID-19-related restrictions through the end of April, while adding a new requirement that anyone who enters Wyoming from another state must quarantine themselves for two weeks.

Gordon’s decision means that schools, colleges, coffee shops, bars, gyms, theaters, salons, barber shops, tattoo parlors and some other businesses will remain closed until at least May, while Wyomingites will generally remain prohibited from gathering in groups of 10 or more.

Additionally, the governor tightened the state's restrictions on restaurants. From now through at least the end of the month, they may only provide curbside, drive-thru or delivery service, with customers no longer be allowed to enter a restaurant's building.

At a Friday news conference, Gordon urged residents to take the pandemic seriously and to "do the right thing" by following the restrictions.

Gordon again urged Wyomingites to stay home whenever possible, to wash their hands and practice extra hygiene, stay 6 feet away from other people, don't allow children to gather up for playdates and limit necessary shopping to one person in a household. He it "is critical that we behave this way."

While there some medical professionals and others have called on the governor to go further and issue a "shelter-in-place" order, Gordon criticized media outlets for focusing on the disagreement and heatedly argued that doing so would accomplish nothing beyond the orders already in place. He noted that other states have included multiple exemptions to their orders.

In his new directive, the governor also ordered that anyone who visits or returns to Wyoming from another state or country must “immediately self-quarantine for 14 days.” If they’re going to be in Wyoming for less than 14 days, they must quarantine until they leave. Montana Gov. Steve Bullock had issued a similar order on Monday, asking people to not visit the state for the time being.

In his Friday directive, Gordon ordered hoteliers, landlords and those who offer short-term rentals through services like Airbnb to post the notice of the mandatory quarantine online and at their accommodation.

“We know that travel from another state or country is a source of COVID-19 infections in Wyoming," Gordon said. “Visitors from neighboring states have strained the resources of many Wyoming communities so we are asking them to do the right thing to protect the health of our citizens and the resources of our rural healthcare facilities.”

The new self-quarantine directive does not apply to people visiting for work purposes, those traveling through Wyoming to another destination, volunteers assisting with the pandemic, citizens returning from necessary medical appointments or parents transporting children as part of custody arrangements.

Gordon said he was aligning the state with recommendations from President Donald Trump, who earlier this week similarly advised Americans across the country to take precautions through April 30 to "slow the spread." Park County, meanwhile, has more restrictive rules in place for gatherings and day cares that were just extended through April 17; whether the county will extend its restrictions remains through the end of the month has not yet been determined.

Dr. Alexia Harrist, state health officer and state epidemiologist with the department of health, said COVID-19 is spreading in Wyoming communities and that social distancing measures remain the most effective way to slow it down.

“We need everyone to stay home as much as possible,” Harrist said Friday. “Anyone can spread this disease, even if they don’t yet realize they are ill.”

The CDC director has estimated that perhaps one out of every four people infected with COVID-19 never show any symptoms, and can spread the disease without realizing it.

As of Friday, a total of 162 cases of COVID-19 had been confirmed in Wyoming, among more than 2,800 tests. No deaths have been reported in the state, with 37 patients — including Park County’s lone confirmed case — making a full recovery. Harrist said most people infected with the disease “will experience mild illness and will be able to recover at home.”

Health officials have warned that the test numbers are painting an incomplete picture.

The most common symptoms of COVID-19 — a fever, cough and shortness of breath — are similar to colds and other more common illnesses. That means testing is needed to determine whether a person is infected with the new coronavirus. And with no treatment available and testing supplies limited, those suspected to have COVID-19 are generally being encouraged to stay home and only seek medical treatment if symptoms become severe. Park County Health Officer Dr. Aaron Billin  has encouraged residents to use an online screening tool developed by Apple.

“We know there are more cases than we have diagnosed,” Billin said Friday, adding on Thursday that the “current numbers of confirmed cases in any community underestimate the scope of the problem.”

As an example of the limited testing, the Wyoming Department of Health announced Thursday that, going forward, the state lab would only accept samples from “priority patients and situations.” Those include hospitalized patients, those in nursing homes and other communal settings, healthcare workers, pregnant women, people over the age of 65 or with underlying health conditions — who are particularly vulnerable to the disease — and people who have close contact with the elderly and otherwise vulnerable.

“It’s been clear for some time that materials needed for sample collection and testing are in very short supply in Wyoming and across the nation,” Harrist said Thursday. “We’ve done well so far at our lab, but our concern about supplies of certain materials we need for testing has grown.”

Gordon said Friday that, to his frustration, the federal government has canceled some of the state's orders for personal protective equipment and diverted the materials to areas being hit particuarly hard by COVID-19. While Gordon said he understands, he's also argued to President Trump that sending some supplies to Wyoming now could help the state get ahead of the disease and avoid the shortages being faced elsewhere in the country.

Lynn Budd, director of the Wyoming Office of Homeland Security, said the state is doing everything it can to get more supplies, including ordering materials "directly from China."

The governor added that state officials expect the pandemic to peak in Wyoming sometime in early May.

"This is the worst crisis I hope we ever face in our lifetimes, and I expect it will be the worst," Gordon said in concluding Friday's presser, adding, "It's across the spectrum from sickness to economic health to people's recovery to the state's future. All of these things are big issues and we'll face them together. And I do know, working together, we can face down this terrible thing. And I do believe we can build a better state."