As the pandemic forced people apart, funeral homes tried to find a way to bring them safely together

Like many businesses operating during the pandemic, funeral homes provided services while keeping customers safe. Being in the business of bringing people together to grieve, the need to also …

As the pandemic forced people apart, funeral homes tried to find a way to bring them safely together 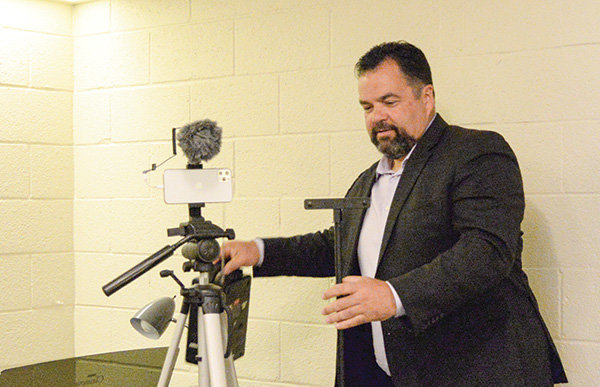 Syd Thompson, funeral director at Thompson Funeral Home, sets up live-streaming equipment inside the funeral home’s chapel. Practicing social distancing amid public health restrictions was a challenge since funerals are all about bringing people together.
Tribune photo by Kevin Killough
Posted Thursday, June 18, 2020 8:15 am
By Kevin Killough

Like many businesses operating during the pandemic, funeral homes provided services while keeping customers safe. Being in the business of bringing people together to grieve, the need to also maintain social distancing presented some unique challenges.

With the threat of COVID-19, they had to find a way to bring people together — while also keeping them apart.

Wyoming’s public health orders didn’t close down funeral homes — and as of Monday, they are exempt from the state’s limits on indoor gatherings — but they were initially subject to a 10-person limit.

Thompson Funeral Home took steps, such as restricting the number of people who entered the facility at any one time during viewings. They provided hand sanitizer and wiped down everything after families left. Otherwise, they left it up to individuals to take further steps, such as wearing masks.

“We assume people will be responsible for themselves. That’s one of the beauties of living in Powell,” said Syd Thompson.

Haskell Funeral Home in Lovell juggled the same challenges at their business and took the same approach to viewings. They asked families to have fewer members come down to make arrangements, and when it came to the funeral service, they held them graveside, where people had plenty of room to maintain social distancing.

“We didn’t have to be the bad guy. The families were really understanding and pretty receptive to that,” said Haskell co-owner Mike Jameson.

A sense of belonging

Up until mid-May, when the out-of-state quarantine order was lifted, people traveling to Wyoming from other states had to stay in quarantine for 14 days. That meant many would miss their loved ones’ funerals.

Thompson wanted to offer a means for people who couldn’t attend a funeral due to travel restrictions or safety concerns to have a way to still experience the funeral service. They considered recording the service on video and uploading it so the family could see it afterward. A recording, though, doesn’t capture that sense of belonging — that sense the friends and family were sharing in the service.

“They want to be a part of the event,” said Zach Thompson, Syd Thompson’s son. The second of Syd’s five kids, Zach Thompson expects to complete the requirements to be a fully licensed funeral director in July. But he didn’t pursue the funeral director’s life at first. He started out working in the oil fields with a biology degree. He found the work didn’t really suit him, so he came home to work in the family business. It turned out well for him, especially considering how the pandemic sent oil prices crashing and jobs in the oil fields vanished rather quickly.

The Thompsons decided that, to provide what families needed, they’d have to do the video live. Live-streaming a funeral service wasn’t just as simple as setting up a Zoom meeting, like so many businesses and government agencies did for public gatherings. They didn’t want to buy a lot of costly equipment, since the expectation is the pandemic will come to an end, and hiring professional videographers can be expensive.

“We wanted to expand our services without incurring more expenses, which would then be passed onto the family. There’s no reason to add more financial strain to people who are grieving,” Syd Thompson explained.

Zoom was one of many platforms that Thompson Funeral Home considered using, but Syd was concerned about reports of the software getting hacked.

“The thought of a service being interrupted with inappropriate content horrifies me,” he said.

Bumps in the road

They finally settled on Facebook Live and purchased a new smartphone that provided better video resolution. They also got a tripod with fittings to mount the phone on. They learned, too, that to provide good audio outdoors, they’d need to put a wind muff on the microphone if they were to avoid wind noise for those viewing the service.

Among those bumps is dealing with Facebook’s algorithms. The social media platform uses software to scan all uploaded videos for copyrighted music. When the software recognizes such music, it mutes the entire audio on the video.

Like all funeral homes, Thompson pays for the licenses to play music at its services, and it was able to send that documentation to Facebook to get the audio unmuted.

“That was two weeks later, and the family was frustrated because they wanted to hear the service,” Syd said.

The National Funeral Directors Association has been battling Facebook on this issue to get them to stop muting funeral services; Syd said Facebook hasn’t been very accommodating.

Using their live-stream setup, Thompson Funeral Home has done several funeral services so far, and they don’t charge extra for the online video.

“Everyone we offer live streaming to takes it,” said Zach.

He said it’s worth it to the funeral home to offer the option if it allows access to the service for even one family member who wouldn’t otherwise be able to be there.

Syd Thompson said it fits in with how the personalized touch they strive for at the funeral home.

“We’ve always tried to not be a cookie-cutter funeral home. We’ve always been very small-town, which is what we like,” the elder Thompson said.