Tim French may have made the earliest campaign announcement in Park County history, when, back in 2018, he announced his intent to run for the state Senate in 2020. 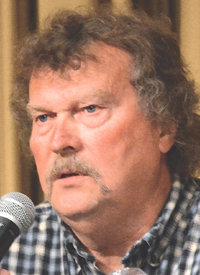 Tim French may have made the earliest campaign announcement in Park County history, when, back in 2018, he announced his intent to run for the state Senate in 2020.

French, a Republican, described himself as a conservative who “will take conservative values down there” to the Legislature in Cheyenne; he said he’s pro-life, pro-second amendment and pro-property rights.

“We’re entering in a tough time,” French said of the situation facing the state and Park County. “I think I’ve got the experience, the common sense … and I’ve been through a lot of it.”

He served on the county commission for 18 years — being the longest-serving commissioner in the county’s history. That tenure included some challenging times, though the troubles now facing Wyoming amid the new coronavirus appear to be on another level.

French noted that restaurants and other businesses are suffering as citizens are being urged to stay at home to slow the spread of COVID-19, retirement accounts and the State of Wyoming’s investments are suffering as the stock market has tanked, cattle prices have dropped and oil field workers are being laid off and the tax base is shrinking as the price of oil has plummeted. And there are fears of how visitation to local destinations like Yellowstone National Park might be impacted this year.

“I’m nervous for the state and Park County,” French said in a March 20 phone call to the Tribune, but he also called himself an “optimistic-type person.”

“We’ve just got to talk and act in a positive manner and stay away from the doom and gloom thing,” he said, adding “We’ve got to do everything we can to promote our main industries — ag, oil and gas, tourism, you name it. We’ve got to really have the back of those industries.”

French described himself as level-headed and said he’s “been around long enough that I feel I can add something to the conversation.”

While the soon-to-be-66-year-old knows he would have a lot to absorb as a new state lawmaker, he called himself a quick learner.

“I’m very confident I can do it if the people put me in that position,” French said.

Senate District 18 covers a wide area, ranging from the Willwood south of Powell to the northern half of Yellowstone National Park, picking up Cody, Ralston, Clark and the North and South forks along the way. Coe has held the seat for 32 years, but recently reaffirmed that he will not seek re-election and will retire.

French is the first candidate to declare their candidacy for the position, though the official filing period doesn’t open until May 14.

“This year’s going to be strange,” French said, referring to the current restrictions on gatherings related to COVID-19, “because if it lasts the summer, nobody’s going to be campaigning other than on the phone.”

He’s hoping that won’t be the case.