A regional food distributor has agreed to a settlement with a former state trooper, who was seriously injured in a 2015 collision with one of the company’s trucks in the Wapiti area.

A lawsuit filed by former Wyoming Highway Patrol Trooper Rodney Miears against Sysco Montana over this June 2015 crash resulted in a confidential settlement last month. The driver of the Sysco truck never saw Miears’ patrol car coming, saying that he had been distracted.
Courtesy photo 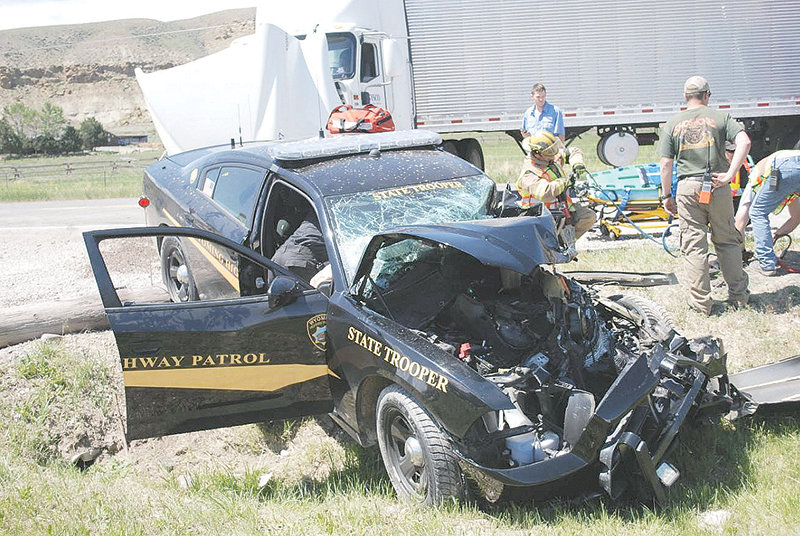 Emergency crews had to extricate then-Wyoming Highway Patrol Trooper Rodney Miears from his patrol car after this crash in the Wapiti area in 2015. Miears later was medically retired from his job as a trooper and moved to a different position with the patrol.
Courtesy photo
Previous Next
Posted Tuesday, January 7, 2020 8:25 am
By CJ Baker

A regional food distributor has agreed to a settlement with a former state trooper, who was seriously injured in a 2015 collision with one of the company’s trucks in the Wapiti area.

Former Wyoming Highway Patrolman Rodney Miears contended in a federal lawsuit that the nearly head-on crash was the result of negligence on the part of Sysco Montana. The case had been slated for a trial in late January, but the parties notified U.S. District Court Judge Nancy Freudenthal on Dec. 23 that they had settled the matter.

The terms of the settlement — such as the amount of any payments that Sysco or its insurers agreed to make to Miears and his wife, Marian — were made confidential.

“Stinson Law Group and Tom Keegan were honored to represent Rodney and Marian Miears who were willing to fight for better truck safety in our community and on our highways,” said Cody attorney Laurence Stinson. “With the case now done, Rodney and Marian can begin a new chapter and put the horror and the pain of this crash behind them.”

One of Sysco Montana’s newly trained truck drivers, James Friede, attempted to make a left-hand turn into the inn’s parking lot, but failed to see Miears approaching from the west. Friede cut in front of Miears, whose patrol car slammed into the food truck at a speed of around 54 mph, according to a crash reconstruction.

Miears suffered injuries to his back and spine that would ultimately force him to take a medical retirement from the agency.

Miears and his wife sued Sysco Montana in December 2018 in Wyoming’s U.S. District Court, seeking an unspecified amount of damages for permanent loss of enjoyment of life, emotional distress, debilitating pain and other impacts from the crash. Friede was not named as a defendant.

Representatives for Sysco Montana admitted in court documents that the crash was the result of Friede’s negligence and that they were vicariously liable for their employee’s actions. However, the Billings-based arm of the national food distribution company disputed that it had itself been negligent.

“Sysco denies that it was a cause of the accident or that it violated safe driving practices,” the company’s attorney, Jeff Meyer of Casper, wrote in one filing. The company had asked Judge Freudenthal to dismiss parts of the case.

In contrast, Stinson and Keegan contended that Sysco Montana’s failings were so egregious that punitive damages should be awarded. They contended in court filings that the business had “elevated urgency above safety and created a corporate culture of urgency which … was in reckless and conscious disregard of the safety of the public.”

Both Friede and a Sysco Montana representative confirmed in depositions that company drivers are expected to work with a “sense of urgency.” For example, an April 2015 evaluation of Friede positively noted that he was “always in a hurry to take care of [customers].”

However, one of Sysco Montana’s expert witnesses disputed the notion that the company had put haste over safety.

“It is clear to me, and to anyone who has actually worked in this industry, that the sense of urgency that Sysco is referring to has to do with how Mr. Friede manages his time while on a jobsite and does not suggest that Mr. Friede should be urgent in the way he drives his [commercial motor vehicle],” trucking consultant Lew Grill of Billings wrote in a report.

Friede said he arrived at work on June 15, 2015, to learn that his route in the Cody area had abruptly been expanded. To his frustration, that meant he’d have to stay in the area overnight. He also wound up being slowed by a couple of mishaps as the day went on — with the stack of his truck getting stuck on an awning at Cody’s AmericInn and two pallets falling over at Dairy Queen.

When he later arrived at Yellowstone Valley Inn, Friede said he didn’t know where to turn; dashcam video from Friede’s Sysco truck showed him looking back and forth from the parking area. According to an expert’s report on the crash, he failed to check for oncoming traffic in the roughly 7.5 seconds leading up to the crash.

“... I failed to defensive-drive, proper lookout, whatever you want to call it,” Friede testified in September. “I failed that because I was, you know, distracted for all the different reasons and trying to figure out where I was going, not paying attention to where I was.”

The Miears’ suit faulted Sysco for not giving Friede directions on how to access the stops on his route, among other issues.

As Stinson and Keegan summarized the incident, Sysco “retained and dispatched a new, inexperienced driver with incomplete training … on a new, overly scheduled route and location ... without preparing or training the driver on where to deliver.”

An Alabama safety consultant retained by the Miearses, Whitney Morgan of Birmingham, Alabama, opined that Sysco “was putting profits over safety by hiring and utilizing an entry-level driver.”

Sysco disputed those characterizations, with the company’s expert witness finding no evidence that the company could have predicted the crash.

Friede was hired by Sysco in January 2015 as a “driver trainee.” He then underwent 12 weeks of training, obtained his commercial driver’s license (CDL) in March 2015 and finished his Sysco training in mid-April. At the time of the June 15 crash, Friede had been on his own for about two months.

The Miears’ legal team argued that Sysco had been warned of potential problems, noting Friede’s April 2015 evaluation said he should “try to eliminate distractions to improve safety,” get “more experience” and “get used to manual transmissions.”

However, Sysco’s expert said none of those things suggested Friede would be involved in a crash or that he needed additional training or coaching.

A termination and a retirement

At the time, Sysco Montana operated about 100 trucks and employed 120 drivers, who drove roughly 5.5 million miles a year across northern Wyoming, Montana, eastern Idaho and western portions of North and South Dakota.

Friede — who received a $65 ticket for failure to yield — was fired from the company a couple months after the crash.

Miears returned to patrol duties in early 2016, but was medically retired from his job as a trooper in August of 2018. He now works for the Wyoming Highway Patrol as the agency’s tow and recovery program coordinator.