Non-citizens are a vital source of labor for Park County businesses. That was one of the takeaways from a panel of speakers who offered an eye-opening glimpse into how vital foreign workers are to … 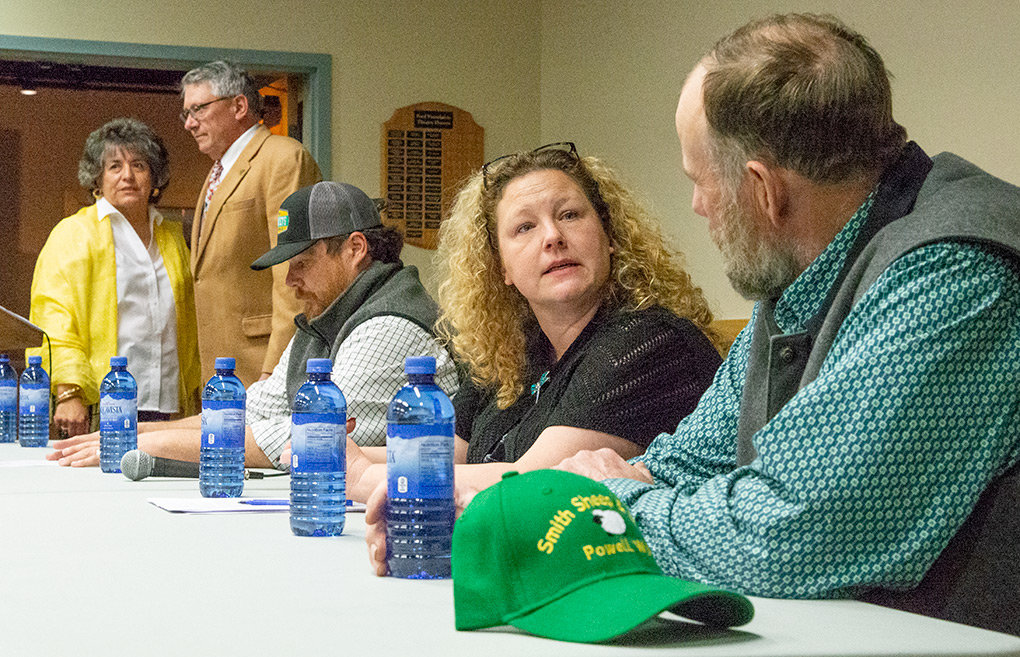 The panelists all said this labor pool is indispensable to the success of their businesses.

“We had [non-citizens] help on the farm as long as I can remember,” said David Northrup, a farmer and a Republican state representative from rural Powell.

Without foreign workers, “I would have to shut down my night shift,” said Jeremy Blaylock, owner of Granny’s in Cody.

“Without these workers, we couldn’t make do,” Finneman said. “We couldn’t clean our rooms.”

Last week’s discussion at the Heart Mountain Interpretive Center was organized by Wyoming Rising, a left-leaning advocacy group. Its purpose was to raise awareness of how often this pool of labor is utilized by many industries in Park County, including tourism, agriculture, landscaping, construction and food-service industries.

The panelists also discussed where the non-citizens come from, what jobs they perform, and how they fit in socially and economically within this country.

The five panelists agreed that foreign workers are not competing with American citizens for jobs. The positions the non-citizens fill are jobs Americans typically don’t want, they said.

The positions are unskilled and involve a lot of manual labor. These include dishwashers, housekeepers, ranch hands, shepherds and busers.

Many of the businesses fill the positions with H2B non-agriculture guest visas, having to first apply to the federal government to employ these workers.

Finneman said part of the H2B program requires the business to advertise the open positions locally, in the Billings Gazette; the intent is to make sure Americans are given the opportunity to apply for the jobs.

Finneman said last year, they got four responses to their ads for housekeepers. Three of the American workers did not perform satisfactorily. The fourth was a good employee, she said, but was a student with a limited schedule.

The housekeepers she hires are expected to clean 13 rooms a day — or about one every half-hour. The work is hard and backbreaking, she said.

“These kids work their tail off,” Finneman said, and they know the value of teamwork.

Renee Nash, who works for the Best Western motels in Cody, said they received no American applicants for their open positions.

Regan Smith, owner of Smith Sheep and Stuff, said when he does get American workers to do the hard work of sheep herding, they just don’t last long.

“The work ethic in this country is shot in the butt,” Smith said.

Each of the panelists pulled labor from different parts of the world: college students on J1 student visas from Taiwan, shepherds from Peru and other workers from Jamaica.

For Blaylock, his H2B workers came mostly from Bulgaria, but he’s had employees from Russia and Jamaica as well.

The Bulgarians “are the hardest workers we have,” he said.

Finneman said she hires about 30 H2B visa employees per year, and Nash said they hire about 40. This year, they have six men and 34 women.

Finneman said sometimes they’re unable to get enough H2B workers, so they draw upon the J1 student visa pool. Since these workers are students, they start later in the season and leave earlier than the H2B visa employees. Though they are typically just as hard working, their shorter availability makes them less desirable.

“They love America,” he said. “It’s good to send them home loving America.”

Nash said, at the end of the season when the employees return to their home countries, they load up on items they buy from American businesses with their earnings. Sometimes they have so much to take home, half the flight is bumped because the plane is too heavy to take off with the full group.

Nash said she organizes events to help connect them with the communities they live in, and for the most part they do fit in. However, she said there have been isolated incidents in which they were “mistreated.”

Smith relies on H2A visa employees, which is a designation specifically for agricultural work. Unlike the H2B visas, which usually last about six months, H2A visas allow foreign workers to stay up to three years in some cases.

He said his workers bring home plenty of items purchased at American businesses, on top of the savings they accumulate while they’re here.

“When they leave, their suitcases are full,” Smith said. “It’s the best foreign aid I can think of.”

The panelists all said they utilize services from other businesses to handle a lot of the paperwork involved with hiring non-citizen employees. The process is not only very time-consuming, they said it’s also becoming more and more expensive.

“They’ve just about priced us out of the business,” Smith said.

In order to bring a worker from Peru, he’s required to pay for their travel, which is over $1,000 for each worker, and he’s responsible for the visa fees as well.

And as with any government process, it’s very slow. They need to begin applying for workers months before they’re needed.

Finneman said they begin recruiting for the summer season right at the start of the year. The process is “grueling,” and there are a “lot of hoops to jump through,” she said.

At the end of the discussion, an audience member asked if people should be calling their congressional representatives to make it easier for American employers to hire foreign workers. All five panelists nodded emphatically.

“What we’re doing here is legal, but the government is making it very difficult,” Smith said.

Editor's note: This version corrects a remark from Finneman that was inaccurately paraphrased.