Fees rise; Yellowstone entrance costs to go up in June

In addition to the price increase, the annual and week-long passes won’t get you as far: Yellowstone passes will no longer be recognized in Grand Teton National Park. Instead, visitors wanting to travel through both parks will need to either buy a …

Fees rise; Yellowstone entrance costs to go up in June 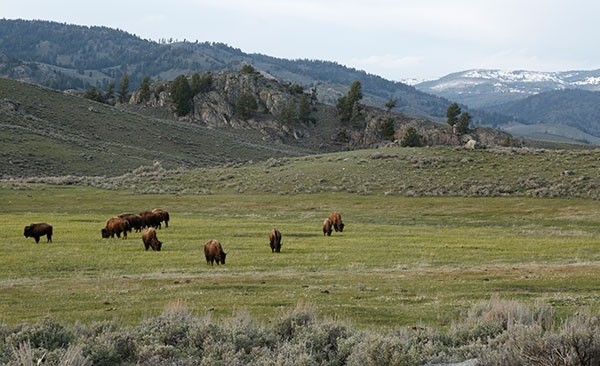 Buffalo graze on green grass in the Lamar Valley area in Yellowstone National Park between Tower Junction and the Northeast Entrance on May 1. Beginning June 1, Yellowstone entrance fees will increase, and visitors will pay more to travel through the park.
Tribune photo by Ilene Olson
Posted Thursday, May 14, 2015 2:33 pm
By CJ Baker

Starting next month, visits to Yellowstone National Park will be a little more expensive.

In addition to the price increase, the annual and week-long passes won’t get you as far: Yellowstone passes will no longer be recognized in Grand Teton National Park. Instead, visitors wanting to travel through both parks will need to either buy a week-long $50 joint park pass or an $80 annual pass that’s good for all the national parks across the U.S.

Yellowstone administrators announced the fee changes on Monday, saying in a news release that they were doing so “in order to fund important resource protection and visitor facility projects within the park.”

Yellowstone officials first proposed the changes in November as part of a National Park Service effort to raise fees at many locations.

In a proposal that would have been unique to Yellowstone, park brass initially intended to replace the week-long passes with ones good for just three days. It would have allowed the park to collect additional fees from the roughly 30 percent of visitors who spend more than three days in Yellowstone. However, park officials announced Monday that they’d scrapped the three-day idea after hearing public criticism that it would be too confusing.

The Park Service estimates the other changes will still bring in an extra $3 million a year, with annual collections totaling around $11 million.

It didn’t take a particularly large outcry for Yellowstone administrators to back off the three-day passes. Weaver said that during the 46-day public comment period, the park received 18 comments criticizing the idea. One came from City of Cody leaders.

“Many comments referred to the fact that adding more options would just confuse people and make the lines at the entrance stations longer,” Weaver said in an email. “Other comments included statements such as, ‘you can’t see the park in 1-3 days.’”

The Park Service received a total of 217 comments.

The vast majority of the comments — 189 of them, or 87 percent — were submitted online.

But records showed it was the first time in more than eight years that the park had sought public input without giving an opportunity to comment online or via email. Further, other national parks who were proposing fee increases, including Grand Teton officials, accepted online comments.

“Previous fee increases have had no effect on visitation levels,” the Park Service said in its news release.