In a five-year status review, the U.S. Fish and Wildlife Service has recommended that grizzly bears in the lower 48 states remain protected under the Endangered Species Act — drawing immediate … 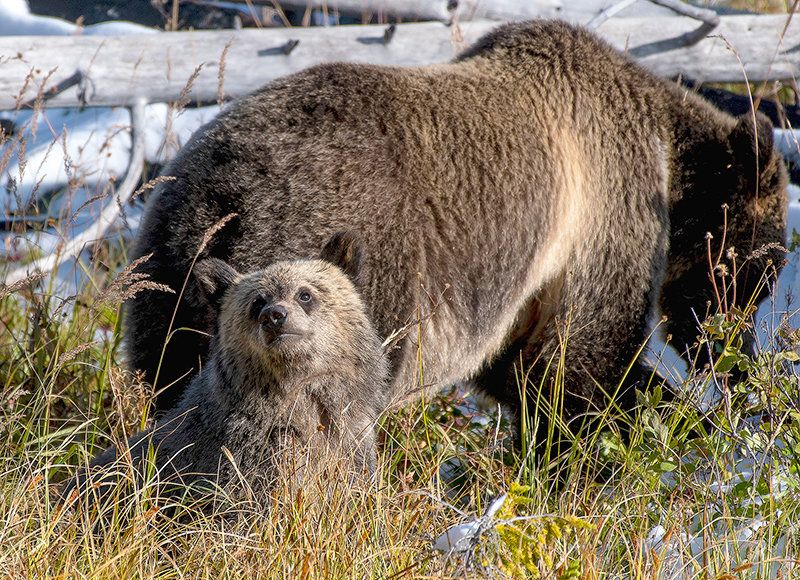 A grizzly cub takes a break from foraging for berries with its mother near the East Entrance to Yellowstone National Park last year. The U.S. Fish and Wildlife Service issued a recommendation to keep the species listed for protections under the Endangered Species Act.
Tribune photo by Mark Davis
Posted Tuesday, April 6, 2021 8:20 am
By Mark Davis

In a five-year status review, the U.S. Fish and Wildlife Service has recommended that grizzly bears in the lower 48 states remain protected under the Endangered Species Act — drawing immediate complaints from officials in Wyoming and western states.

“The grizzly bear in the lower-48 states is not currently in danger of extinction throughout all of its range, but is likely to become so in the foreseeable future,” the report, released late last month, concludes.

Initiation of the status review began in January 2020, after the Ninth Circuit Court of Appeals agreed with a Montana judge and kept the Greater Yellowstone Ecosystem’s grizzly bears under Endangered Species Act protections.

In March’s report, the Fish and Wildlife Service said years of data demonstrated that the species has recovered in the Greater Yellowstone Ecosystem. However, as directed by the court, the service took a broader view, attempting to identify the species’ ecological requirements for survival and reproduction at the individual, population and lower-48 states levels. The agency looked at the factors, both positive and negative, that influence the species’ viability now and into the future. They then evaluated the listed entities’ current levels of resiliency, redundancy, and representation — known as the “3Rs” — and projected plausible changes into the future.

Historically, more than 50,000 grizzlies once inhabited large tracts of the western U.S. They currently reside in only 6% of their traditional range in the lower 48 states, although that range has tripled in the past four decades. Currently, grizzly bears primarily exist in four areas: the Northern Continental Divide, Cabinet-Yaak, Selkirk and Greater Yellowstone ecosystems.

“The grizzly bear in the lower-48 states needs to occur in multiple, resilient ecosystems distributed across a broad geographic range in order to meet redundancy requirements and withstand catastrophic events,” according to the Fish and Wildlife Service review.

The study not only looked at current conditions and conservation efforts, but tried to anticipate conditions over the coming decades.

Given those projections, the report says the grizzly bear in the lower-48 states could experience an increased risk of extinction.

The fight for the right in Idaho, Montana and Wyoming to manage the species within their borders has been going on for years. It reached a crescendo in 2018, when U.S. District Court Judge Dana Christensen of Missoula relisted the population after a short stint off the list. The decision halted planned hunt seasons in Idaho and Wyoming the day before they were scheduled to begin.

The Trump administration had moved to delist the species, but suits initiated by conservation groups, individuals and regional tribes kept the species listed for protection. The Wyoming Game and Fish Department joined state and national political representatives coming out in favor of delisting grizzly bears after devoting more than 40 years of research, manpower and tens of millions of dollars working to protect the species and mitigate conflicts as the population expands beyond suitable habitat.

“By all federally mandated criteria and scientific measures, the grizzly bear population in the Greater Yellowstone Ecosystem has reached and exceeded recovery status for more than 20 years,” Wyoming Game and Fish Director Brian Nesvik said shortly after the recommendation was published.

Nesvik has been active in fighting for the state’s right to manage the population in Wyoming. He described the Greater Yellowstone Ecosystem population as “booming,” growing from as few as 136 bears “to potentially more than 1,000 in the ecosystem today.” The U.S. Fish and Wildlife Service currently counts about 737 bears in the region, but new counting methods being researched by a national subcommittee could show the species is actually well above current estimates.

The grizzly bear’s traditional range “has expanded beyond what is considered biological and socially suitable habitats by 7,738 square miles,” Nesvik said. “Yet, it remains listed because of endless federal lawsuits litigated in courts outside of Wyoming and disengagement from what is happening on-the-ground in our state.”

For Wyoming’s ranchers, hunters and those living, working or recreating in the ever-expanding bear country, state management is crucial, he contends.

“Once again, it’s time to recognize the science and return grizzly management authority to the experts on the ground in Wyoming who have done the hard work to conserve this iconic species,” he said.

A team of lawmakers from the three-state area introduced a bill on March 25 that would remove from grizzly bears in the Greater Yellowstone Ecosystem. Titled the Grizzly Bear State Management Act of 2021, the bill is co-sponsored by Republican Sens. Cynthia Lummis and John Barrasso of Wyoming, Mike Crapo and James Risch of Idaho and Steve Daines of Montana.

Keeping the species listed, Lummis said, hurts the populations more than it helps them.

“By all scientific measures, the grizzly bears of the Greater Yellowstone Ecosystem are fully recovered” and should be returned to state management, Lummis said.

“Wildlife managers that live near the bears and study them closely have a better idea of population parameters than bureaucrats in Washington,” she said. “It’s time to delist the grizzly in our area and let science dictate our wildlife policy.”

“Grizzly bears in the Greater Yellowstone Ecosystem are thriving and do not need protection under the Endangered Species Act. This has been true for years,” he said, noting the Obama administration agreed the grizzly bear should be delisted in 2015.

“Wyoming’s good work and sound management practices should be given an opportunity to demonstrate success,” Barrasso said.

However, conservation groups were quick to condemn the bill.