Under pressure from groups, state considers tightening regulations on trapping

The Wyoming Game and Fish Commission has denied a petition to develop trap-free zones in the state. But April’s meeting in Cheyenne won‘t be the last time the commission hears testimony …

Under pressure from groups, state considers tightening regulations on trapping 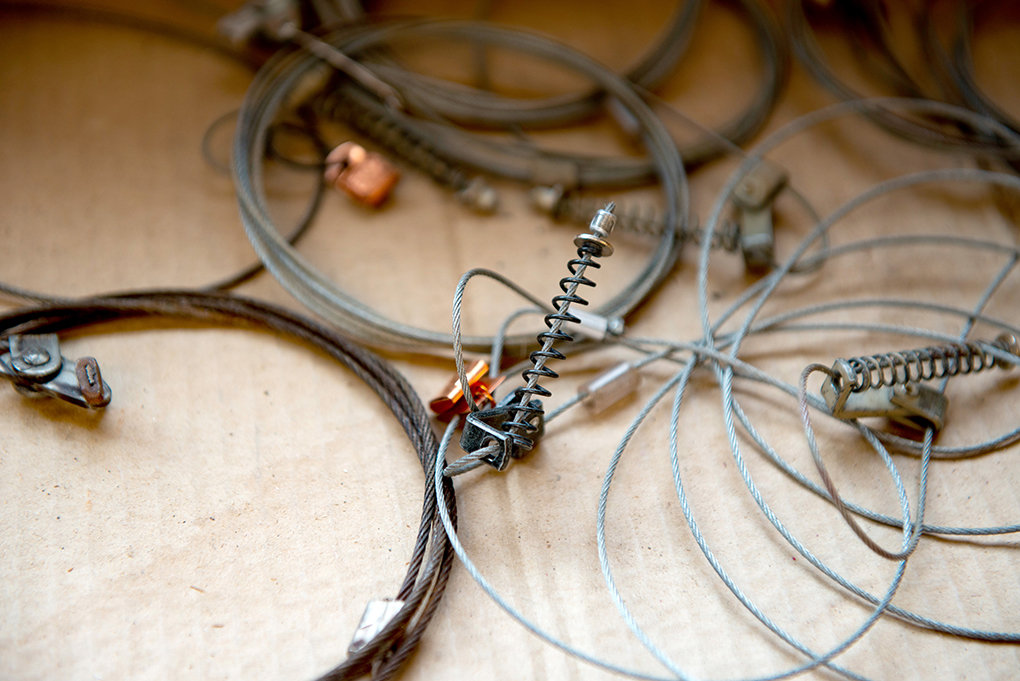 The snare pictured is outfitted with a breakaway mechanism. The snare is designed to catch predators, but if a deer, mountain lion or horse gets in the trap, the snare releases.
Tribune photo by Mark Davis 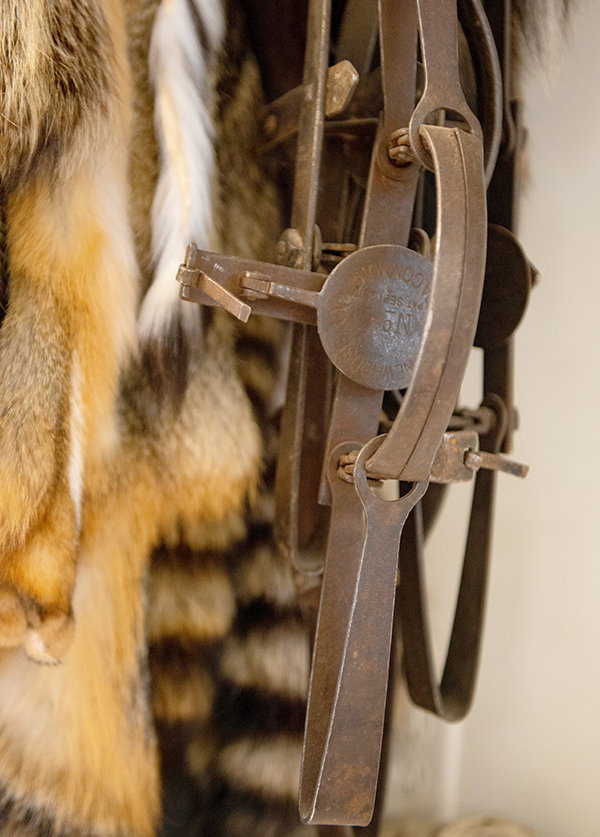 A foothold trap hangs near harvested furs at Boone Vuletich’s Big Horn Fur Company in Cody. Vuletich has been trapping for more than four decades and encourages more educational opportunities for trappers and the general public.
Tribune photo by Mark Davis 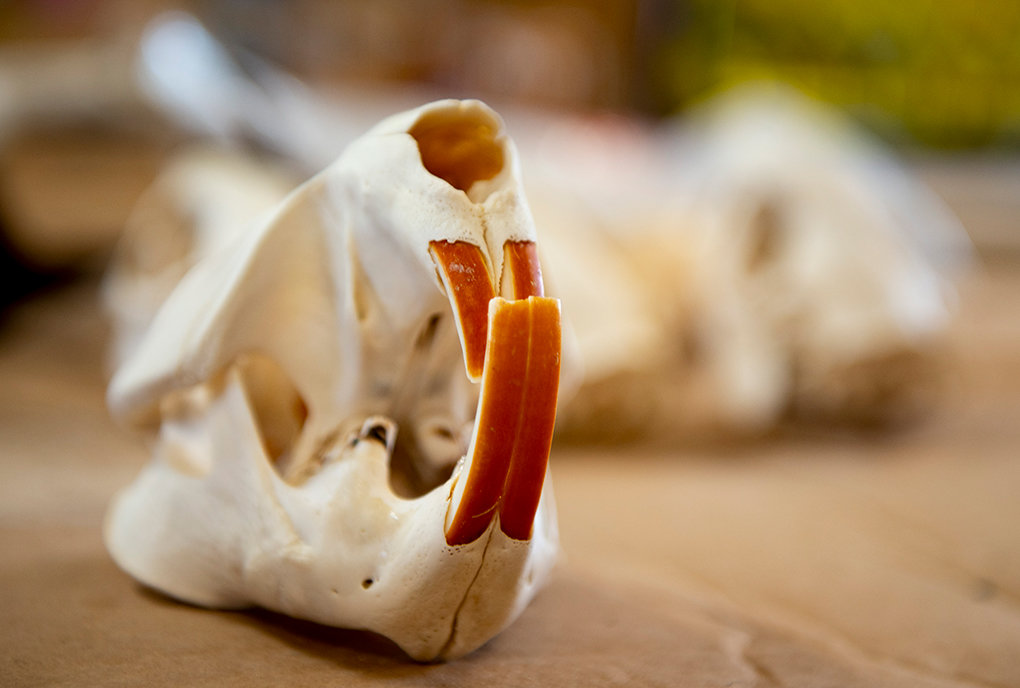 A beaver skull, one of the main targets for trappers.
Tribune photo by Mark Davis 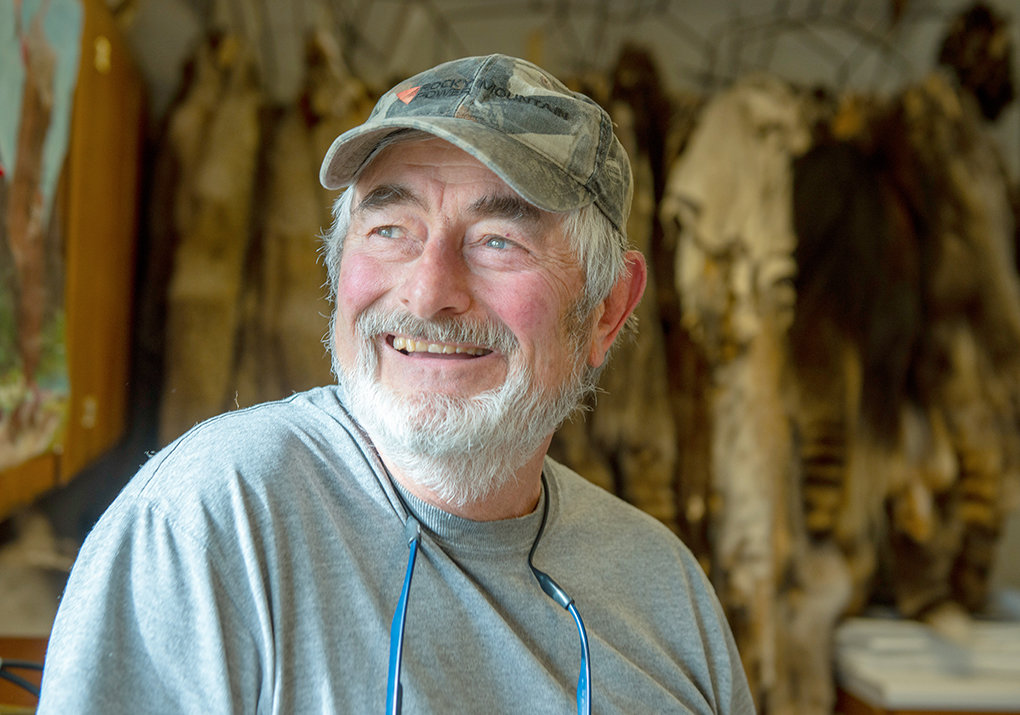 Boone Vuletich, of Cody, is an advocate of trapping, but wishes more funds were available for educational programs.
Tribune photo by Mark Davis 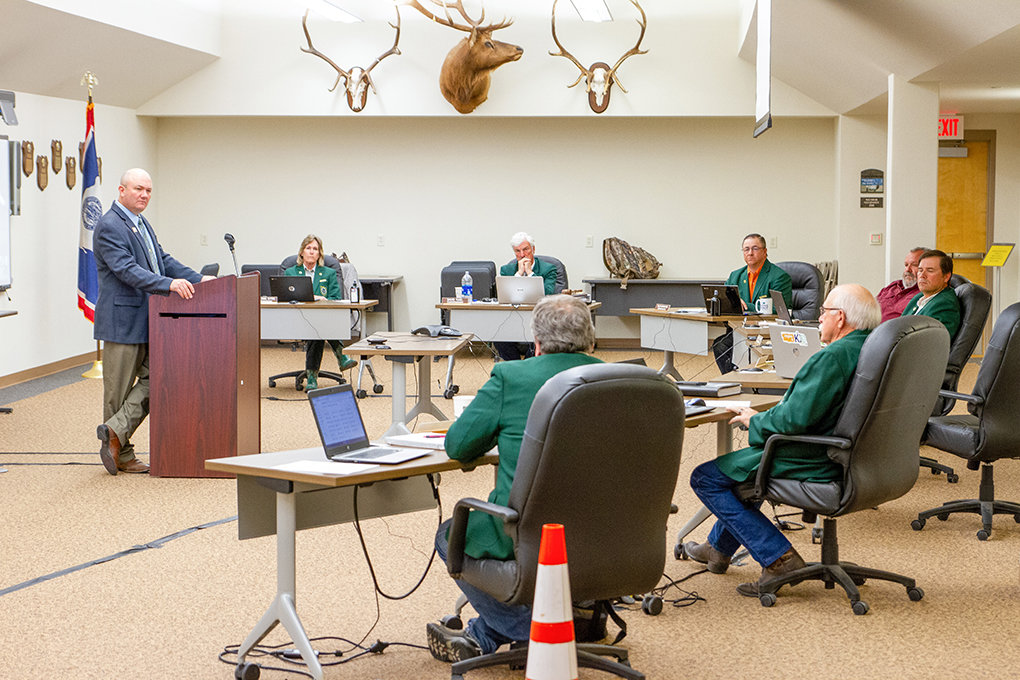 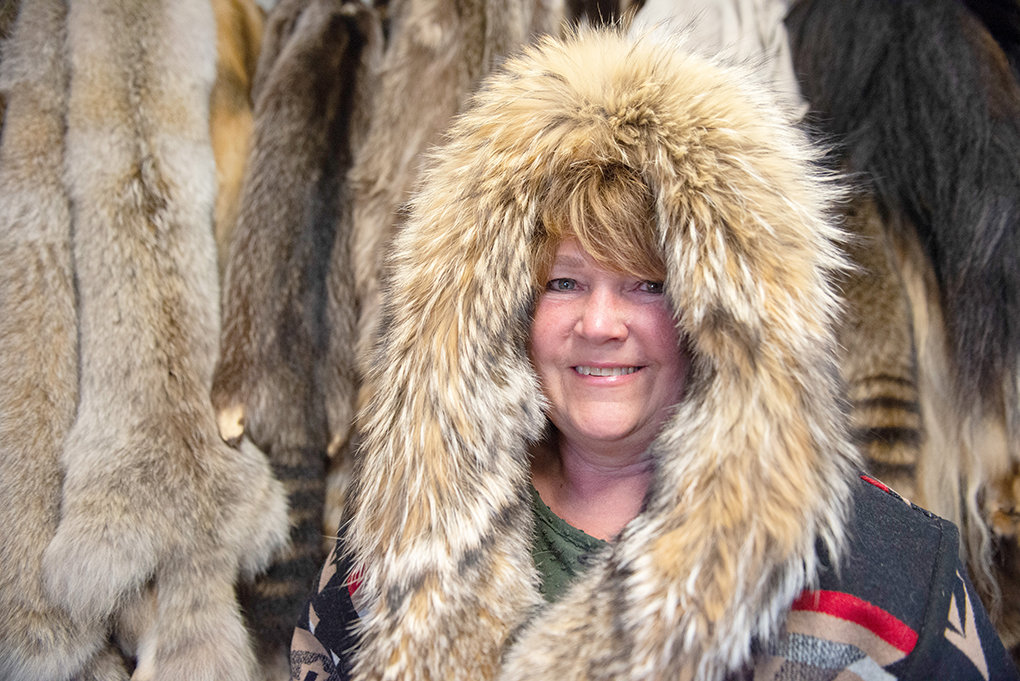 Kat Vuletich shows off one of her wearable garments using fur embellishments.
Tribune photo by Mark Davis
Previous Next
Posted Tuesday, May 5, 2020 8:20 am
By Mark Davis

The Wyoming Game and Fish Commission has denied a petition to develop trap-free zones in the state. But April’s meeting in Cheyenne won‘t be the last time the commission hears testimony about the controversial issue, leaving the door open for possible compromise later this year.

Emotions were running high last month, as commissioners heard testimony for and against a proposal to ban traps from several popular recreation areas in Wyoming. Those against trapping find it cruel and indiscriminate and will likely never change their opinion. At the same time, trappers love their form of outdoor pursuit and, after years under attack, are quick to defend their rights. Trapping regulation changes are made every three years and aren‘t scheduled to open again until 2022.

After making the motion to deny the petition to opening state trapping regulations out of its regular cycle, Commission Vice President Pat Crank said he read hundreds of comments on the proposed changes and was tired of listening to “end-of-the-world kind of comments.”

“Statements that say if we give someone this inch, there’ll be no more hunting in Wyoming are silly statements in my mind,” he said. “I just ask people have a civil, productive discussion as we go forward on this issue.” That gave a small amount of hope to those seeking reform, but statements from Commissioner Mike Schmid of LaBarge encouraged trappers hoping for no further regulations.

“I would caution the department make sure what they bring back is not one-sided. It’s not more regulation on the trappers. It’s ideas on how the other side of this equation also contribute,” Schmid said.

Crank promised to continue the conversation in coming months and requested more information from the Game and Fish Department before moving forward.

“The commission was pretty clear that they wanted a deliberate, thoughtful process throughout this whole thing,” King said after the meeting. “It’s a complicated issue. And I think it‘s really tough for both sides of the equation to set aside personal beliefs and opinions and values. In reality, I don’t think that you can, but I think the best that we can hope for is that folks will come to the table with an open mind and open ears.”

Karen Zoller, of Pavillion, petitioned the state after her dog was caught and killed in a snare equipped with a dispatch spring; they had been out for a run on Bureau of Land Management property. The trauma of not being able to get her dog, Mac, out of the trap and having him die in her arms made Zoller want to share her story. She started WY TRAP FREE-mont County soon after the incident.

“I just wanted to share the story to let other people know to be safe because there are hidden traps everywhere,“ she said.

Zoller advocates for trap-free areas across the state, a ban on spring-loaded snares designed to quickly kill predators, trapping area signage, set-backs from public trails, a 24-hour trap check rule and rules requiring the reporting of all animals caught — both target and non-target species. She would also like to see trapper education, similar to regulations recently passed in Idaho requiring trappers take the class prior to purchasing a license.

“Wyoming is lagging behind our neighboring states on trap reform that would make our public lands safer,“ Zoller said.

Idaho requires trappers buying their first license after June 30, 2011, to take mandatory course work prior to buying a new license.

After Mac was killed, Zoller started writing letters to commissioners. She received few replies, including no response from her district representative, Gay Lynn Byrd, she said. Then she wrote Gov. Mark Gordon.

He called last week to discuss the situation and “said we made many good points and is going to look into power snares,” Zoller recounted.

Zoller said that while the Wyoming Constitution protects trappers, it also protects those seeking recreation in Wyoming‘s expansive public access areas. “If you read further in the paragraph, it says you can’t diminish the rights of others,” she said. “So, trappers are responsible for every trap place.”

Zoller also wants to be clear she is not anti-trapping.

“Even from the very beginning when Mac died, this was about everybody having equal rights to public lands,” she said. “We need to come together and find a solution to make it right for all.”

The Wyoming territory was opened by trappers. Towns, parks and highways are named for the trappers who forged into the landscape prior to settlement. Even Northwest College uses the Trappers as its mascot. It was in 2012 that Wyoming voters passed the constitutional amendment enshrining the right to harvest predators and furbearers via traps.

And trappers are quick to defend their sport.

Any attempt to further regulate the activity results in a rush to action by many licensed trappers, including members of the Wyoming State Trappers Association.

“Media events are really what some people want to see here to discredit trapping,” wrote Tom Krause, WSTA liaison and District 6 director for the association, prior to the meeting.

The group claims the circumstances leading to Mac‘s death were “widely misreported in the press as occurring on a public trail” and happened on a canal road posted with “No Public Access” signs. They also contend the animal was caught 50 yards off-trail and “was obviously not in direct control.”

“There‘s no compromise when one side wants to take and the other side has to give everything,” Krause wrote on the association‘s website, encouraging members to testify during the April meeting.

Laramie Wiginton, the trapper whose snare killed Mac, told the commission he was sorry about Zoller‘s loss, but “I would hate to guess how many pets are hit by vehicles every year and I don’t see anybody pushing to ban vehicles.”

Boone Vuletich, a Cody resident and trapper with decades of experience, said attempts to create trap-free zones is the first step in what he considers anti-trapping groups “wanting to stop trapping and hunting.”

Vuletich has more than 40 years of trapping experience, as well as a long career in state and federal outdoors law enforcement. Yet he‘s willing to compromise on one issue, saying after the meeting he thinks trapping education “could go a long way” in stopping conflicts. He advocates for both trapper education as well as classes to teach the general public techniques to release traps when necessary.

“I do understand this is emotional,” Vuletich said, “but I have trust in you [commissioners] that you’ll come up with a good decision.”

Many of those testifying were urged to make their voices heard by the nonprofit organization, Wyoming Untrapped. Their mission statement is, “informing the public of the hazards of Wyoming’s inhumane wildlife trapping practices to achieve meaningful trapping reform.”

The group has been pushing for regulations for more than five years. Mac wasn‘t the first dog to die in a trap in recent years, according to the group.

“Wyoming‘s wildlife management is not keeping pace with our modern society’s views of the intrinsic value of our wildlife. Programs and agencies need to transform to engage and serve broader constituencies,” the group contends.

Trappers, geared more for hard days on the river or afield rather than online recruiting, know one thing: They don‘t want rules changed.

“Wyoming Untrapped is an animal rights group impossible to work with and inconsistent with Wyoming traditions and values,” Krause posted on the Wyoming State Trappers Association website.

Game and Fish Commissioner David Rael said he has been hearing from both sides on the issue for the past three years. He is open for some reform, but doesn‘t want to “over-regulate trappers.”

“It‘s an important management tool,” he said of trapping. Rael added that “dogs are a member of the family. What happened is horrible — it‘s tragic what [Zoller] went through. But I know penalizing trappers isn‘t the answer.”

Where Rael does see opportunity for change is when a license is needed to set traps. “If you‘re going to set traps, you should buy a license,” he said after the meeting.

The Game and Fish sold 2,500 trapping licenses last year, but a license isn’t needed to trap predators in Wyoming — animals that include raccoons, coyotes and foxes. Vuletich, who buys fur for his business, Big Horn Fur Company, said there are likely many more people involved in trapping than those licensed, because of the loophole for predators. “That‘s where the money is,” he said.

Vuletich thinks there would be plenty of money for educational programs if all trappers were required to buy a license. Rael, a former California resident, is on board with the idea, saying it could raise substantial revenue.

“All trappers should step up to the plate and buy a license,” he said. “But I don‘t want to be like California.”

(Editor's note: This article has been corrected to remove bobcats from the list of predators. Bobcats are classified as furbearers.)