Before deciding, they have a lot of questions:

Could a teacher shoot a teen wielding a gun? What is a truly adequate amount of training for employees carrying firearms? Would Powell children actually be safer if staff members carried concealed … 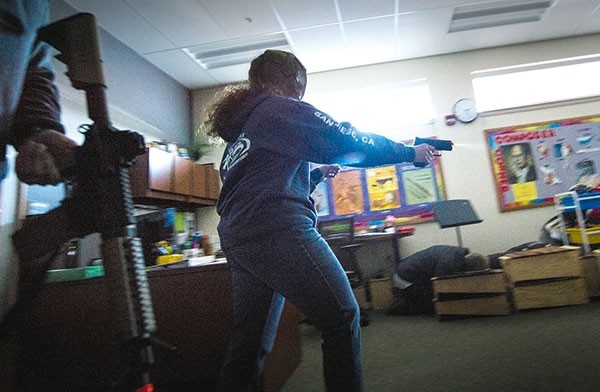 Armed with an Airsoft handgun, Westside Elementary teacher Donna Cole plays the role of a shooter during an ALICE training drill the school held Wednesday. The training is one way that the Powell school district works to protect students. District leaders are considering the possibility of allowing trained staff to carry firearms as another precaution.
Tribune photo by Mark Davis
Posted Thursday, March 1, 2018 3:25 pm
By Tessa Baker

Powell school board members do not yet know if they will consider a policy to allow trained staff to carry guns in local schools.

Before deciding, they have a lot of questions:

Could a teacher shoot a teen wielding a gun? What is a truly adequate amount of training for employees carrying firearms? Would Powell children actually be safer if staff members carried concealed weapons? If someone is so unstable that they’re willing to shoot kids on a campus, will anything deter them?

Board members posed those questions to local law enforcement during a school board meeting Tuesday night.

Before beginning Tuesday’s discussion, Superintendent Jay Curtis noted that “this topic is hot, and it can be very controversial.”

“We cannot let this issue consume us as a community, nor as a school district,” Curtis said. “We have the really, really important job of educating children. And yes, we have to keep them safe, and this has a tendency to be a very emotional issue, and not always a logical issue.”

Curtis also emphasized that the issue of arming staff is “one thing we’re talking about as a puzzle piece to a very large and comprehensive plan to keep our kids safe everyday.”

“Even if we had a shooter walk in tomorrow, our staff is more prepared for that today than they would have been at the beginning of the school year,” he said.

School board trustees said they want to know how school employees feel about carrying firearms after going through ALICE training. Throughout the district, Powell staff and students are undergoing the active shooter response training known as ALICE (which stands for Alert, Lockdown, Inform, Counter and Evacuate).

The board decided to resurvey staff this month, after every school has completed the ALICE training.

It will also hold a public forum at 7 p.m. on Monday, March 12, at Powell High School.

School board chairman Greg Borcher encouraged fellow board members to use the next several weeks to get answers to their questions about school security or a possible concealed carry policy.

The board will then decide at its April 11 meeting whether to move forward with reviewing a concealed carry policy or kill it altogether, Curtis said.

“As most of you can tell, this is not an easy decision for the seven of us to make,” Borcher said, adding that the board usually makes all of its decisions based on data. “... I know it’s highly, highly emotional. We don’t take it lightly.”

During Tuesday’s meeting, the Powell board talked about a concealed carry policy that the Cody school board approved by a 5-2 vote on a first reading last week; Cody’s policy must undergo two additional readings before it’s adopted.

Curtis said the Cody board and superintendent have spent many hours discussing the policy and dissecting it, and “we have the culmination of a lot of good work.”

Around Wyoming, 13 or 14 school districts “are having this conversation right now.”

“Not all of them are in the media much,” he said.

The Evanston school board recently voted to move forward with a concealed weapons policy, and a final vote is scheduled for March 13.

Superintendent Curtis said conflict on the topic is inevitable, but combat is optional. Curtis said this issue cannot be combative in the Powell community, as it has been in some towns that have talked about it.

Following a recent shooting in Parkland, Florida, where officers didn’t initially go into the building, Borcher asked Powell Police Chief Roy Eckerdt what the department’s response would be if there was an active shooter in a school.

A Powell police officer would go into the building immediately if he heard gunshots fired, Eckerdt said.

“He’s going in. There’s no forming a team, there’s no waiting for somebody else to get there,” Eckerdt said.

On any given school day, four to five officers are on duty, Eckerdt said, and Powell officers live within 15 minutes of schools and also would respond.

“What you’re going to see that you might not expect is, you’re going to see BLM, the Forest Service, Highway Patrol, the Sheriff’s Office,” Eckerdt said. “So a lot of agencies within this area are going to respond in addition to Powell PD. In pretty short order, you’d have a lot of officers on scene.”

Some officers would respond in plain clothes, because they wouldn’t have time to put on a uniform.

Trustee Tracy Morris asked about the scenario of having to shoot a student who has a gun.

Eckerdt said officers undergo training to the point of muscle memory, so “when you’re met with a threat, you respond according to what’s in front of you.”

He also said if the school district moves forward with a policy, they would have to consider what happens with armed staff when law enforcement arrives on the scene.

“When we come through the door and see a gun, we don’t know who the good guy is or bad guy is when we come in,” Eckerdt said, adding that in his opinion, armed staff should put away their weapon when law enforcement arrives and respond to officers’ instructions.

“You have a tremendous presence in this town, and your officers are never very far from our schools,” Curtis said.

Trustee Trace Paul said there’s a mindset that armed staff could be a deterrent for an active shooter to come on a campus.

“Is there any research out there that shows that somebody that’s that unstable, that’s willing to come onto a campus and shoot people, will anything deter that personality?” Paul asked.

Eckerdt said he hasn’t seen research on that specifically, but he has seen research that gunmen in school shootings don’t want any confrontation and want soft targets.

“Generally, they’re cowards to the point that they don’t want conflict. As soon as they meet a confrontation, it’s over,” he said.

Chief Eckerdt said he would support the Powell district with whatever decision they make on a policy.

“Whatever direction the board decides to go, we’ll support in any way we can,” he said.