Crow look to youth for future of Heart Mountain celebration

Carlson “Duke” Goes Ahead, vice chairman of the Crow Council, traveled to The Nature Conservancy’s Heart Mountain Ranch Preserve on Friday as the organizers of the ceremony celebrated the seventh annual outing. If the size of the smile on Goes …

Crow look to youth for future of Heart Mountain celebration 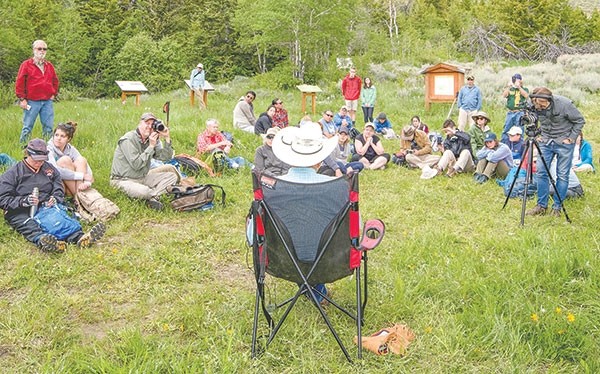 Grant Bulltail speaks to a crowd of more than 40 that came to witness a ceremonial pipe lighting Friday at the Treeline Kiosk on Heart Mountain.
Tribune photos by Mark Davis 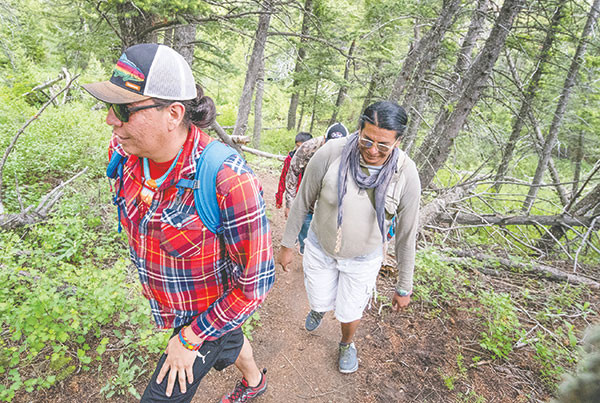 Noel Two Leggins (left) leads a group of Crow youth on a hike to the summit of Heart Mountain, or as they know it, Foretop’s Father. Two Leggins has been instrumental in bringing young tribal members to the mountain to learn about their heritage. 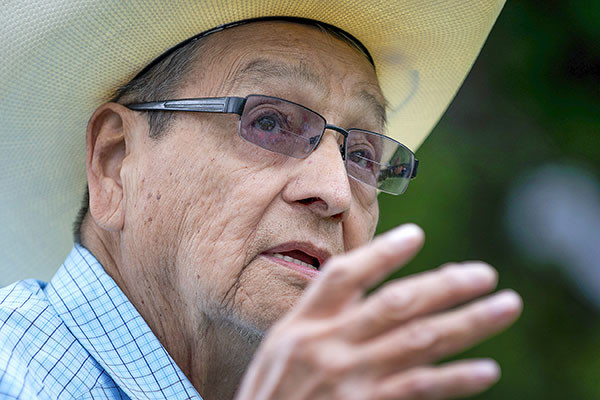 Grant Bulltail, a Crow elder and pipe lighter, speaks to a crowd of more than 40 that came to witness the ceremony and hike to the summit at The Nature Conservancy’s Heart Mountain Ranch Preserve. Bulltail’s speech was about Crow history on the mountain and learning to adapt as the world changes. 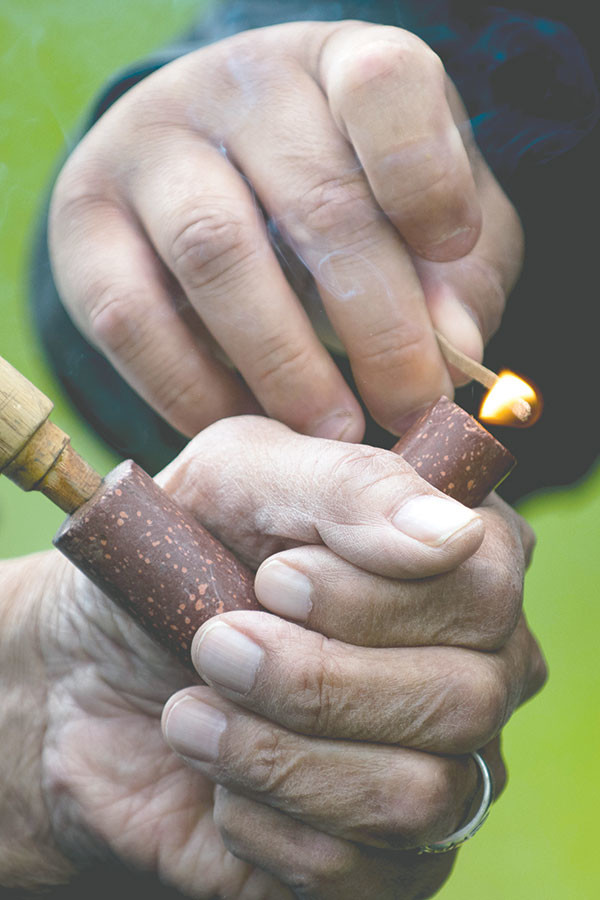 Crow elder Grant Bulltail lights a pipe filled with ceremonial tobacco during a ceremony at the Treeline Kiosk on Heart Mountain on Friday. 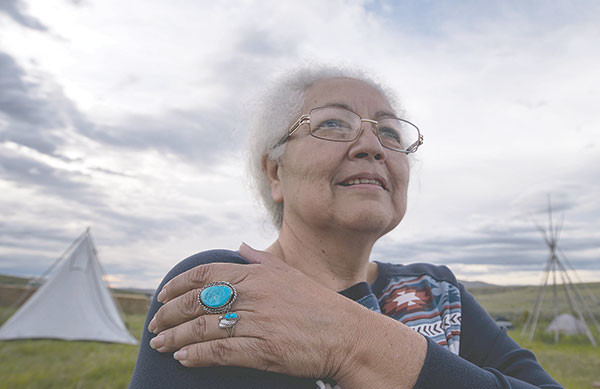 For the first time, a Crow politician made the trip to witness the pipe ceremony during the tribe’s annual return to Foretop’s Father, the Crow name for Heart Mountain.

Carlson “Duke” Goes Ahead, vice chairman of the Crow Council, traveled to The Nature Conservancy’s Heart Mountain Ranch Preserve on Friday as the organizers of the ceremony celebrated the seventh annual outing. If the size of the smile on Goes Ahead’s face at the summit is any indication, it won’t be his last.

“It takes leadership to make things happen and that’s why I’m here,” Goes Ahead said.

Grant Bulltail, Crow elder and pipe lighter, has come to Heart Mountain yearly to perform the ceremony since 2010, when The Nature Conservancy gave the tribe access. Tobacco is an important part in the history of the the Crow, and pipe ceremonies are a way to bring people together. Bulltail took the opportunity to speak to a crowd of about 40 about the historical importance of the mountain, as well as the importance of bringing youth to witness the ceremony.

“We’ve lost our way of life, but we’re still here and surviving,” Bulltail said. “We have to adapt to changes.”

Crow burial site markers — rock mounds — and tepee rings were removed while the land was in private hands. And fences now divide what was once a free range. Even on the reservation, fences and no trespassing signs fragment what used to be the habitat of buffalo, Bulltail said.

“The buffalo was our Walmart and now Walmart is our buffalo,” Bulltail said.

The survival of Crow traditions is dependent on getting youth involved in the process, according to Noel Two Leggins, chief of staff for the office of the vice chair. This was the first year Bulltail couldn’t make the hike to the meadow at the Treeline Kiosk to perform the ceremony and had to be transported.

Two Leggins has made the trip from his home on the Crow Reservation in Montana every year and encouraged young tribal members to attend the ceremony in past years in an effort to share Crow tradition and the tribe’s history in the region. But this year he decided to change his tactics and invite Goes Ahead, who is in his third term on the tribal council.

“We don’t have the funding to bring them all out here,” Two Leggins said.

Two Leggins started his experience on Heart Mountain as an observer and hiker seven years ago, but was invited to be a guest speaker during the weekend’s panel discussion, along with Bulltail and Indiana University’s Dr. Laura Scheiber.

“I spoke from the heart,” Two Leggins said. “A lot of our youth are just sitting at home watching TV. We’re losing our culture.”

Two Leggins said he hopes that, by bringing tribal leaders to the ceremony, more funds will be made available to bring youth to the ceremonial weekend.

“I want a lot of Crow people to experience the spiritual significance of this place. We need to get our youth to hear the birds, put their hands in the streams and feel the water. We need to get the phones out of their hands,” Two Leggins said.

Event coordinator Dr. Mary Keller, a professor in the department of religious studies at the University of Wyoming, calls Two Leggins a crucial link between the past and the future.

“Where Bulltail is our line to history, Noel is the line to the 21st century cultural celebration,” Keller said. “The youth are the future of healthy discussions.”

Keller said young members of tribes, like youth in our towns, are fascinated by technology. The weekend festivities offer alternatives to experiences on social media. One of the main activities of the weekend is a hike to the summit on the mountain.

“The hike represents an alternative to opening them to their own strengths and heritage and improving their wellness through an intergenerational ceremonial event,” she said.

Goes Ahead was escorted to the summit by Two Leggins and a small group of youth. Seeing the beauty of the land and experiencing a walk on historical Crow hunting and battle grounds was an important journey for the tribal leader.

“This is part of our backyard, as we say,” Goes Ahead said. “We will work on getting youth here.”