Instead of checking out the picnic area or the playground, Douglas, former head of the FBI’s Investigative Support Unit, said he looks around and thinks, “That would be a good place to dispose of a body; it would be difficult to … 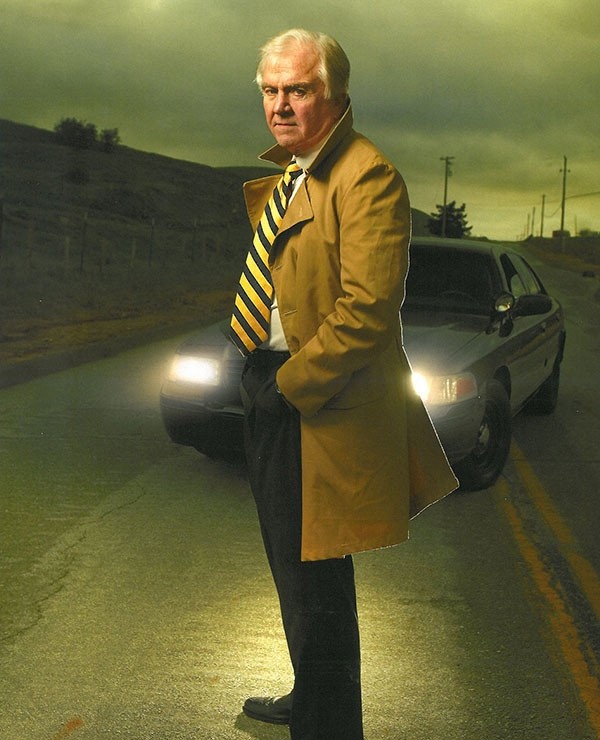 John Douglas, inspiration for the character Jack Crawford in the film ‘The Silence of the Lambs,’ will speak at 7 p.m. Wednesday in the Nelson Performing Arts Center Auditorium at Northwest College.
Photo courtesy Alex Farnum
Posted Thursday, April 23, 2015 2:31 pm
By Ilene Olson

A visit to a park is a very different experience for John Douglas than it is for most people.

Instead of checking out the picnic area or the playground, Douglas, former head of the FBI’s Investigative Support Unit, said he looks around and thinks, “That would be a good place to dispose of a body; it would be difficult to find.”

Douglas’ reaction is a result of his extensive research about the ways criminal minds think. That research took him into prisons to interview some of the most heinous criminals in U.S. history — a lengthy list that includes Charles Manson, Ted Bundy, David Horowitz (Son of Sam) and Seattle’s Green River killer.

Douglas’ entry into his FBI career was unusual, both because of how young he was, and because it was a complete surprise to him.

“I thought I wanted to be a veterinarian,” he said during a recent telephone interview with the Powell Tribune. “But I wasn’t ready. I basically bombed out of Montana State.”

He was drafted into the Air Force in 1966. “That was probably the best thing that ever happened to me,” he said.

Douglas spent four years in the military and completed his bachelor’s degree in the process.

When he got out, he was recruited into the FBI by a man he met at a gym.

“He took me home with him. He had a nice house, and I was living in a basement apartment with one lightbulb,” Douglas recalled.

The 25-year-old decided to go for it and a month later, he was in Washington, D.C., as a very young agent.

After 14 weeks of training, Douglas was stationed in Detroit, where he worked violent crimes — “kidnappings, extortions, fugitives, rapists, murders” — and became a member of the SWAT team, where he later served as a hostage negotiator.

“It was a great place to learn and to work, but I wouldn’t want to live there. They had 800 homicides in a year, and we couldn’t even go in some places,” he said.

Many of his students had experience investigating violent crimes, and their experience sometimes clashed with what some instructors were teaching about famous cases, such as the Charles Manson murders.

“They would say, ‘Hey, you got your facts wrong. I worked the case,’” he recalled.

Douglas said he realized he needed to accelerate his learning and experience. He decided the best way to do that was to go directly to the source of violent crimes: the people who committed them.

So, when he was sent to cities around the country to teach criminal psychology classes, he and another instructor used their free time to interview criminals in the area’s prisons.

“I conducted the research, not from a rehabilitation perspective, but from an investigative perspective,” he said. “It was considered innovative, but to me, it was basic. If you want to learn about violent crime, talk to the experts: the criminals perpetrating rapes, arsons and serial homicides.

“Once I got into this stuff, I started teaching the students ... If someone was in the class who worked the investigation, I would be able to say, ‘I interviewed him, and this is what I learned.’ It became a very popular class.”

It didn’t take long to see roots and patterns of behavior emerging from his research, Douglas said.

“Most of the people we interviewed came from some type of a dysfunctional family,” such as a passive or absent father, domineering mother and physical and/or psychological abuse.

However, not all people who experienced those traumas went on to become violent criminals, he said.

Douglas said his research indicated a direct correlation between animal cruelty and human violence. “Not just curious, doing it once, but where they find sadistic pleasure from torturing,” he said.

Cruelty to animals was one of three factors he identified in what he termed “the homicidal triangle,” which he said can predict violent tendencies. The other two are bedwetting as a child, beyond the normal age, and setting fires.

“Of the three, that (animal cruelty) is the one that really stands out; it’s really a good predictor,” he said.

All of Douglas’ research helped him develop a method of criminal profiling, which, in turn, ultimately enabled him to list likely characteristics of the perpetrator after visiting or viewing photos of violent crime scenes, helping aim investigations more effectively.

Douglas provided profiling services in 59 cases that first year, in 1979. The number doubled the following year. By 1995, the number of criminal profile requests had grown to 1,000.

In 1981, Douglas was called to Atlanta to help focus the investigation of a string of murders of African American boys and young men that began in 1979.

While local investigators were looking for a white perpetrator, “I said, ‘This is a black offender,’” Douglas said. “They didn’t like it.”

He made several other predictions and suggestions, and investigators’ reaction was, “You’re crazy.”

But later, each proved true, he said.

When word later got out that fiber evidence from one of the bodies had been matched to fibers found on other victims, “I started thinking like the criminal,” Douglas said. “I started thinking, ‘Bodies are going to start going in the water now.’

“That was how they found him (the perpetrator, Wayne Williams) — the splash of a body hitting the water (in a river).”

Williams was tried for two murders and was convicted of both.

Douglas said the convictions were due in part to guidance he provided that helped break down Williams’ calm demeanor on the stand and show the anger he’d been holding in check.

Two years later, demand for the FBI’s criminal profiling services had grown tremendously, but the agency had not increased its personnel resources adequately to keep up with the demand.

While still passionate about the work, “I started telling the assistant director, ‘I can’t take it. I can’t keep up with it; I’m taking cases home every day.’

He ended up collapsing in a Seattle hotel room on a Wednesday in November 1983.

When fellow agents got into his room and found him that Friday, he had gone into a coma and had a 107-degree temperature. The right side of his brain had split and was bleeding due to the fever, and he had repeated seizures.

Doctors diagnosed him with viral encephalitis, brought on, or made worse, by stress and being so physically worn down.

Douglas’ wife and his father came to Seattle and were told he probably wouldn’t survive. Even if he did, he likely would be in a vegetative state because the fever had “fried his brain.”

But Douglas did come out of the coma a week later, though he was paralyzed on his left side and had difficulty remembering and speaking.

He remained in the hospital for a month, and defying all odds, he returned to work in May 1984 after five months of rehabilitation.

“Then came the Tylenol case, the Unabomber and Robert Hansen in Anchorage, Alaska,” he said. “I was all over the place. It was crazy.”

The amount of work and its intensity took a toll on his family as well. “It was hard to bring this stuff home with you, home to the family. ... I would come home, and would have to decompress.”

“You come home and your child scrapes her knee, but you just left work today in a case where a young child was murdered and mutilated.”

In his biographical book, “Mind Hunter,” Douglas recalled how, after his wife cut herself accidentally with a knife, and after he was sure she wasn’t seriously injured, his reaction was to study the blood spatters and compare them to some he had seen on a case.

Douglas retired from the FBI in 1995, but he continues to provide criminal profiling services.

He said he tries to deal with those emotions and problems by attempting to balance the physical, social and spiritual sides of his life.

“I try to keep a balance, a perspective,” Douglas said. “There’s only so much you can do. But ... when somebody’s calling you for help, how do you say no?”

Fans of television shows like “CSI,” “Criminal Minds” and “Profiler” can see the FBI profiler who started it all Wednesday, April 29, at Northwest College.

John Douglas, inspiration for the character Jack Crawford in the film “The Silence of the Lambs” will speak at 7 p.m. in the Nelson Performing Arts Center Auditorium at Northwest College.

Douglas transformed the FBI’s Behavioral Sciences Unit into the Investigative Support Unit, forever changing the way law enforcement around the globe would track down dangerous criminals.

In his talk, Douglas will give insights to some of the most infamous in American society — from Charles Manson and David Berkowitz (Son of Sam) to the Tylenol poisoner and Seattle’s Green River killer.

As he shares his many journeys into darkness, he also shares the takeaways he’s discovered over the years about the creation of the criminal mind and its position in society.

Material in the presentation will be graphic and is intended for a mature audience.

Organizers strongly suggest purchasing tickets in advance to guarantee reserved seating in the event of a sellout crowd. Cost to attend is $10 per person.

Tickets can be purchased online at www.nwc.edu/mindhunter or by calling 754-6062.