The Park County Assessor’s Office will have to make due with one fewer employee for at least a couple more months. 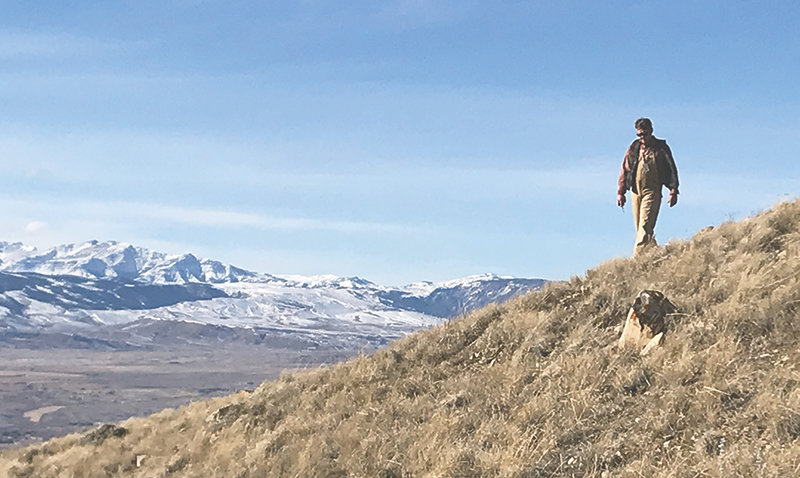 Dave Wildman, the chief field appraiser for the Park County Assessor’s Office, inspects a cellphone tower in the McCullough Peaks in January 2019. County commissioners recently blocked the assessor’s office from filling a vacant position for at least 90 days. Assessor Pat Meyer says that reducing his staff could reduce the amount of field work his office is able to complete.
Photo courtesy Park County Assessor’s Office
Posted Tuesday, July 14, 2020 8:20 am
By CJ Baker

The Park County Assessor’s Office will have to make due with one fewer employee for at least a couple more months.

On a 3-2 vote last month, county commissioners blocked Assessor Pat Meyer from filling a position that recently became vacant, choosing not to exempt him from the county’s hiring freeze. Commissioners will reconsider the decision in 90 days, but until then, the assessor will have a total staff of nine rather than 10.

At the outset of the June 16 debate, Meyer had told the commissioners that they would be “crazy” to not let him refill the job. Given his decades of experience with the county, “I think I know what’s good for my office at this point,” Meyer told the board.

He contended that cutting his staff would make it harder to ensure that all county properties are assessed fairly and equitably — and make it more of a challenge to check for new buildings and other developments that are not being assessed for tax purposes.

“They pay for themselves, year after year,” Meyer said of his staffers.

Commissioner Lloyd Thiel and Commission Chairman Joe Tilden were won over, saying they believe the assessor’s office differs from other departments because it generates revenue.

“I think we’re shooting ourselves in the foot, maybe not immediately, but down the road,” Thiel said of not filling the position, adding that 90 days “of not making money is going to hurt us.”

“We need to replace this person to make sure that we have a steady stream of income,” he said.

The chairman typically only votes in a tie, but in this case, Tilden seconded the motion to refill the position and then voted in favor of it. Tilden said not replacing the position was doing “an injustice to the county.”

However, commissioners Jake Fulkerson, Lee Livingston and Dossie Overfield voted to stick with the hiring freeze, largely citing a desire for consistency.

Fulkerson noted that the public works, planning and zoning and buildings and grounds departments have all had to go without in recent months — and he said there hasn’t been a drop in productivity.

“We’re asking other departments to do more with less, work harder, regardless of what they do,” Fulkerson said, adding, “It’s hard for me to run into one of these other people [department heads or elected officials] and say, ‘Oh, you know, they [the assessor’s office] have a lot of dollars, so they don’t have to work as hard.’”

For months, county leaders have been coming before commissioners and talking about what they think will happen if they go without an employee, but “I’d like to see it,” Livingston said. “That’s where the 90 days comes in.”

Today (Tuesday) commissioners will consider whether three more positions — two more in the road and bridge and buildings and grounds departments and another in the treasurer’s office — should remain vacant.

Last month’s discussion took a tense turn when Park County Planning Director Joy Hill weighed in on the discussion — questioning how many people were needed to assess the county’s properties and suggesting an upcoming aerial photography project commissioned by the state would save the man hours and travel time by allowing the office to assess more properties remotely.

“I think that’s something that should be taken into consideration when you think about effort,” Hill said of the aerial imaging, “because technology is stepping in to try to help these people do their jobs more effectively.”

Fulkerson said that was good information for the commissioners to have in making a decision on whether to fill the assessor’s position.

“I didn’t see a slide on that” in the presentation, he said, critically.

Meyer said the aerial images from EagleView (formerly Pictometry) might reduce the number of site visits made by his office. However, he said it remains unclear as to how much work it will save and that any free time would allow his staff to audit more personal property owners — potentially yielding more tax dollars — and to complete other tasks.

“I don’t think we have any problem finding more things to do,” he said.

Meyer also took issue with Hill offering a take on his staffing.

“Frankly, I don’t really really agree with another department coming up and trying to tell me how much I should be looking for or how many people I need for the county assessor’s office when I’ve been here for 35 years,” he said. “I think that’s out of line.”

Hill later returned to the meeting room and responded that she’s not only a county employee, but also a member of the public, a taxpayer and someone familiar with aerial photography.

“I offer that just as an idea of where he [Meyer] might not have thought of some savings that could be coming to his office,” Hill said. “No other purpose.”

Toward the tail end of the discussion, Commissioner Fulkerson said he considers the assessor’s office to be a “well-oiled machine,” and that holding it to the hiring freeze wasn’t personal.

Meyer said in an interview that he plans to again seek to refill the position when the 90 days are up.

As commissioners debated whether to allow Park County Assessor Pat Meyer to replace an employee last month, Meyer contended that his office was already understaffed. However, the data he used to support that case was misinterpreted, according to a Tribune analysis, and actually suggests he has a larger-than-average staff.

With 10 employees, the assessor’s office has had one worker for every 2,327 parcels of property.

In his presentation to commissioners, Meyer asserted that he should have one employee for every 1,500 to 1,700 parcels of land, describing that as an average from the International Association Of Assessing Officers (IAAO).

“... They said we should have 14 people,” Meyer told commissioners, adding that the IAAO is “a nationwide company, they’re global, and I mean we got that right out of their books on what you should have.”

However, IAAO materials and data reviewed by the Tribune indicates that, on a per-parcel basis, Park County actually has a larger-than-average staff for a jurisdiction of its size.

Meyer’s comments were drawn from a textbook published by the IAAO, called “Property Appraisal and Assessment Administration.” The authors write that, while workloads vary, “one full time employee for each 2,500 parcels is typical” and “in smaller jurisdictions, the workload averages about 1,500 to 1,700 parcels per employee.”

First Deputy Assessor Terry Call explained in an email that the office felt Park County would be considered a small jurisdiction, since some places in America have hundreds of thousands of parcels.

However, with more than 23,000 parcels, the IAAO actually considers Park County to be a larger jurisdiction, a spokesman for the association confirmed in an email to the Tribune last week. Those offices, he said, typically have a workload of one staffer per 3,000 to 3,500 parcels. A 2013 IAAO survey of assessing offices in the U.S. and Canada similarly found the median county had one employee for every 3,000 parcels of land.

Based on the number of parcels of land in Park County, the IAAO data suggests that similarly sized jurisdictions have seven or eight employees on average, rather than the 14 Meyer referenced.