Fast-tracking new businesses, promoting the local quality of life, supporting programs that keep youth in the area and sticking with economic development efforts were among the strategies pitched by … 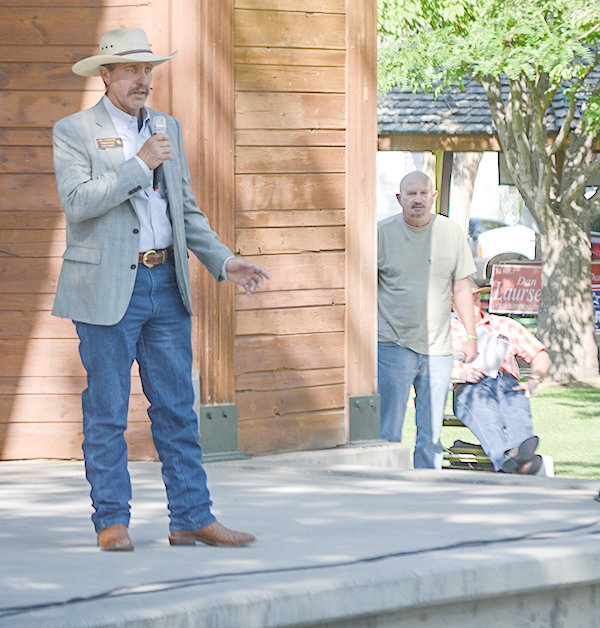 Fast-tracking new businesses, promoting the local quality of life, supporting programs that keep youth in the area and sticking with economic development efforts were among the strategies pitched by Park County Commission candidates at a forum last week.

All four Republican contenders for two open seats on the board — incumbents Lee Livingston of Wapiti and Jake Fulkerson of Cody and challengers Scott Mangold of Powell and Ted Smith of Cody — made their cases at an Aug. 4 event at Washington Park, hosted by Powell Economic Partnership (PEP)/Powell Chamber. Their remarks generally centered around economic development.

Livingston said that if re-elected, he’ll continue to “support programs that will keep kids here, support our colleges, support our schools” and to send funds to Forward Cody and PEP.

He spoke about the importance of bringing up youth who understand that hard work pays off.

“One of the questions is, what do you do to keep the workforce here? Well, I just had to raise them,” said Livingston, noting that two of his kids are in his outfitting business.

Since starting in the industry some 36 years ago, he said that times have changed.

“Our workforce is hard to find right now,” he said. “A lot of it is there’s a lot of folks who just don’t want to work. You give them $600 extra a week [in unemployment benefits], they’re not going to work. ... They need to have an incentive to work.”

Fulkerson, an appraiser, former banker and former Cody school board member, said it’s important to continue working at economic development and to chip away — even when things have slowed down economically.

“If I’m re-elected, I’m going to spend the next four years doing what I’ve done in the last four years, and that’s being very involved with the economic development in Powell, Wyoming,” Fulkerson said.

There’s a lot of good things going on in the Powell area, he said, specifically mentioning the hard work of PEP and the hemp growing alongside U.S. Highway 14-A.

Mangold, a Powell city councilman and a broadcaster and co-owner of the radio station KPOW, said the area has some strong opportunities while the news is filled with COVID-19, riots, quarantines and people working from home.

“Right now we are sitting on gold here in Park County,” he said, referring to the quality of life here. Mangold said people used to think cities were the place to raise a family, but “it’s not that anymore — it’s a place like Powell, Wyoming, where you got kids over here that can take their bikes to the park.”

He called the county “the ultimate destination place.”

Keeping infrastructure maintained and attractive for businesses and families is important, Mangold added. He noted that, while mayor of Powell, the city led an effort to build a citywide fiber optic network to boost local businesses.

He also continued to pitch the fact that, unlike the five current commissioners, he’s from the eastern part of Park County.

“That is sort of seeing Sasquatch riding a unicorn,” Mangold said. “You don’t see too many of those.”

As for Smith, the Park County government custodian and nontraditional agricultural education major at Northwest College said that “a healthy business environment is necessary for our future here in Park County.”

Smith said he would support education, job training and quality of life. He praised the local school districts and said Northwest College “is really something that we all can take pride in and use it as a springboard to do greater things.” He also mentioned specific learning opportunities available to local residents, ranging from NWC classes to the LinkedIn Learning offered through Wyoming libraries.

“Government does not provide free daycare, but we should not impede people from getting into it and then to help people to go to college and to work,” Smith added. “And we should facilitate whatever it takes to help people do better.”

For instance, Smith suggested that Park County could allow people to use county meeting rooms for credit counseling.

He also cited the importance of locally grown businesses, suggesting the county “fast track” businesses “in order to bring people in and get them started, and not cause any delays in that.”

The top two vote-getters in next week’s election will advance to the general election ballot in November.