The Smithsonian Institution has awarded a $500 grant to the Youth Advisory Board at the Buffalo Bill Center of the West to help local sage grouse.

The project being undertaken by the Cody High … 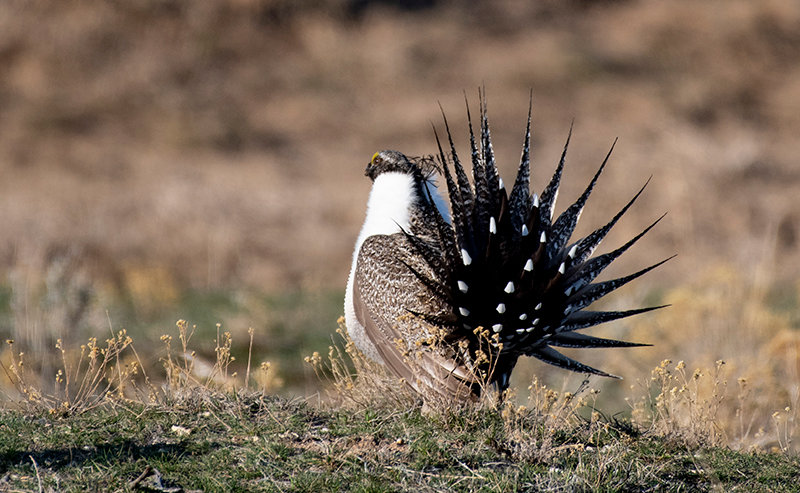 Sage grouse habitat is the focus of a project by the Youth Advisory Board to the Buffalo Bill Center of the West. The project was recently awarded a $500 grant from the Smithsonian Institution.
Tribune photo by Mark Davis
Posted Thursday, February 18, 2021 8:05 am

The Smithsonian Institution has awarded a $500 grant to the Youth Advisory Board at the Buffalo Bill Center of the West to help local sage grouse.

The project being undertaken by the Cody High School students who sit on the advisory board centers around preserving the sage grouse population through restoring sagebrush habitat. Students Colton Manchester, Kinley Bollinger, Paige Martinez, Ida Tallen, Mia Beachler and Madeline Bender will be working directly with the Bureau of the Land Management, with the bulk of their project taking place this spring.

The Center of the West has been collaborating with the Youth Advisory Board for several months to develop a teen-designed and -led project addressing an environmental issue of concern to them.

On Jan. 26, the group of Cody teens presented their idea to Smithsonian officials, to compete for a micro-award from the Smithsonian to implement their project. The center wound up as one of nine Smithsonian partners nationwide selected for an award through the Smithsonian’s National Earth Optimism Teen Conversations Project.

“We were so impressed with the thoughtfulness and thoroughness of the students’ action plan,” said Jennifer Brundage and Brian Coyle, the project’s directors at the Smithsonian Institution. “Their research and proposal revealed a deep understanding not only of their physical environment, but of their community needs as well.”

This Smithsonian Teen Conversations project was created to bring teens together from all parts of the country to learn about and discuss their concerns about the environment.

The Earth Optimism initiative seeks “to illuminate and magnify the positive, hopeful ways that individuals and communities are addressing the climate crisis.” Because of the pandemic, the project had to be conducted virtually, with students invited to attend monthly conversations on Zoom with their peers across the United States, Smithsonian scientists and other environmental experts. The Smithsonian’s teen collaborators suggested topics, recruited speakers, designed promotional materials, and led discussions on topics such as reducing the use of plastic, environmental justice and food security.

Teens have six months to execute their project, and to send a video about what they did with the funding to the Smithsonian.