The first time 6-year-old Bridger Walker held his baby sister, he wouldn’t let anyone take her out of his lap. His parents saw how special their bond was from the moment they met, but that love … 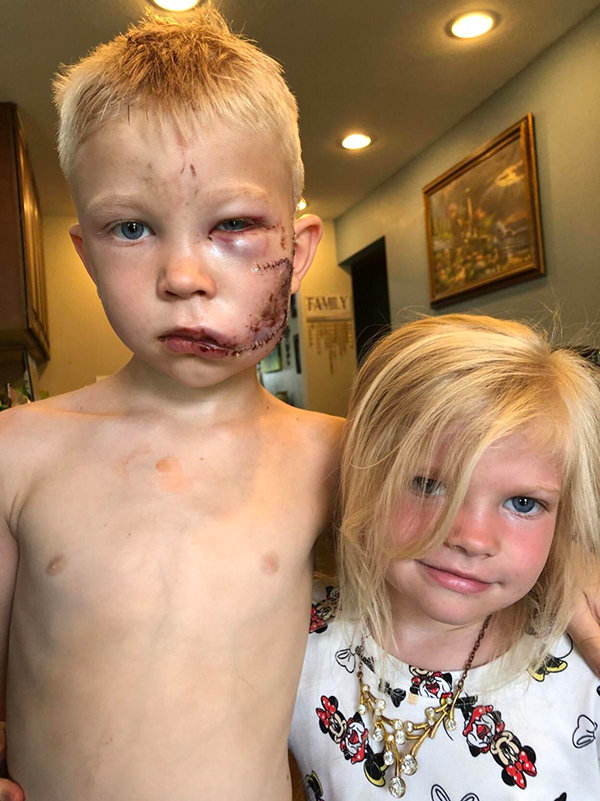 Bridger Walker stood between his little sister and a charging dog. He later said, ‘If someone had to die, I thought it should be me,’ wrote his aunt, Nikki Walker, in an Instagram post that went viral. Bridger received about 90 stitches.
Courtesy photo
Posted Tuesday, July 21, 2020 8:05 am
By Margaret Austin, Wyoming Tribune Eagle Via Wyoming News Exchange

The first time 6-year-old Bridger Walker held his baby sister, he wouldn’t let anyone take her out of his lap. His parents saw how special their bond was from the moment they met, but that love was proven in actions on July 9.

When young Bridger saw a dog charging at his little sister, he jumped in to stand between her and the dog. Before he could grab his sister’s hand and escape, Bridger was bitten by the dog multiple times on the face and head.

In a July 12 Instagram post, his aunt, Nikki Walker, wrote, “After receiving 90 stitches (give or take) from a skilled plastic surgeon, he’s finally resting at home. We love our brave boy and want all the other superheroes to know about this latest hero who joined their ranks.”

Hundreds of thousands of social media users and celebrities on Instagram, Facebook and Twitter saw the show of Bridger’s bravery and voiced their support for the little “hero” from Cheyenne. And though Nikki tagged a number of famous actors who play superheroes in the post, she didn’t expect it to reach more than 500 people.

Little did she know, Bridger’s story would touch the hearts of people across the globe and would be shared on news sites in countries like India and Britain.

By Monday, the post had more than 1.5 million likes and had been covered by major media news outlets across the country. A number of celebrities and companies even flooded the comments of Niki’s post to share how Bridger’s courage had inspired them.

Mark Ruffalo wrote, “People who put the well being of others in front of themselves are the most heroic and thoughtful people I know. I truly respect and admire your courage and your heart.”

“Real courage isn’t dominating people or fighting against people or walking around like a tough guy,” added Ruffalo, who plays the Incredible Hulk in the Avengers movies. “Real courage is knowing what is right to do and doing it, even when it might end up hurting you somehow.”

Academy Award-winning actress Octavia Spencer also commented to show her appreciation, and Beats by Dre, an audio company famous for its headphones, reached out with interest in sending Bridger some free thank-you gifts as a reward.

Bridger’s dad, Robert Walker, reflected on Bridger’s recent fourth-place finish at a jiu jitsu tournament in a comment on the post.

“We did our best to assure him that how he placed didn’t matter because we knew he did his best,” Robert wrote. “So when he selflessly saved his sister this week, I’m not sure how much was his couple years of training and how much was his little warrior heart and the indescribable love he has for his sister. Regardless, he has earned the title as undisputed champion in our home.”

While Bridger is still recovering from the incident, comments and well wishes continue to flood in across the major social media platforms.

His aunt wrote on Instagram, “He’s in great spirits, and his awesome personality is intact. He can’t smile too widely yet, but he was grinning as I read some of your comments to him.”

The rescue dog involved in the incident was put down, at the will of the dog owners and against the wishes of Bridger, who didn’t want to see the 1-year-old German shepherd mix hurt.

A news release from the family said, “We also humbly request that you keep the dog’s owners in your prayers and forego any superficial judgments — because we love them.”

According to Cheyenne Animal Shelter Director Sue Castaneda, animal control officers were dispatched to the incident July 9. However, she said both parties requested that the details of the situation be kept private.