Anticipation was building as Erik Oberg sprung from his government issued SUV to unlock the gate to Mount Washburn. The planned destination promised an off-trail look at not only some of Yellowstone … 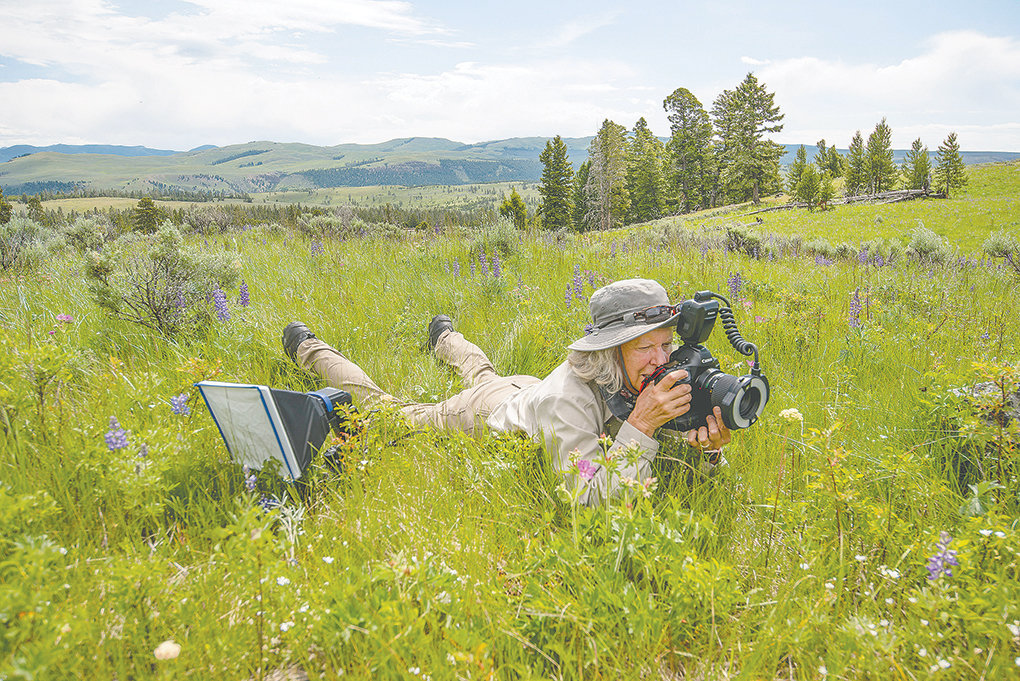 Kathy Lichtendahl, of Clark, photographs a May beetle while it feeds on plant leaves on Mount Washburn in Yellowstone National Park. Lichtendahl is part of the Yellowstone Phenology Project, an effort to track insects inside one of the park’s seven climate monitoring sites. She photographed live insects in their habitat as she joined about 50 volunteer citizen scientists collecting data on climate change.
Tribune photo by Mark Davis 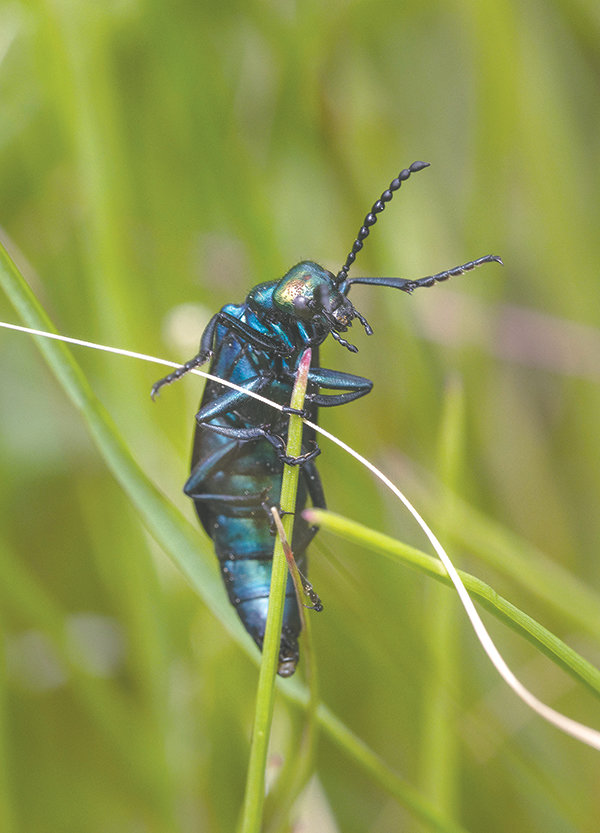 A blister beetle forages peacefully, but if threatened, the insect secretes a blister agent that can be harmful to humans and possibly deadly to livestock. Many suspected spider bites turn out to be caused by blister beetles instead, Lichtendahl said.
Photo courtesy Kathy Lichtendahl 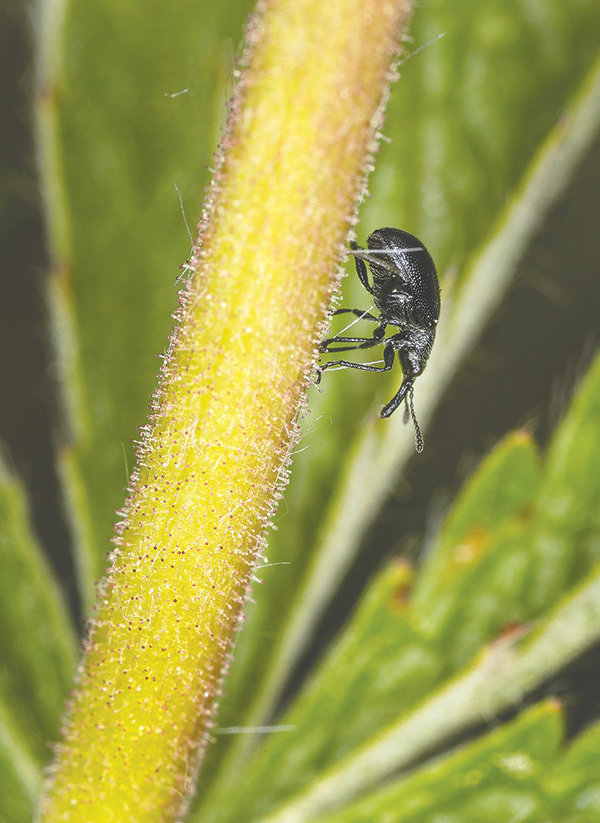 A weevil, with its long snout, is seen at a climate monitoring site on Mount Washburn in Yellowstone National Park.
Photo courtesy Kathy Lichtendahl 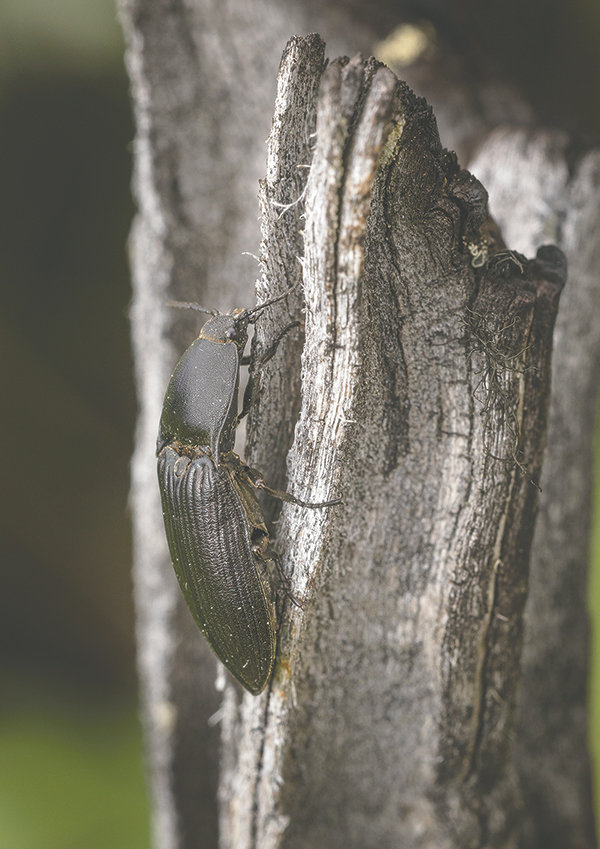 A click beetle — named for the noise they make when threatened — looks for a meal near decaying wood. The species is closely related to fireflies, but without the delightful lights.
Photo courtesy Kathy Lichtendahl 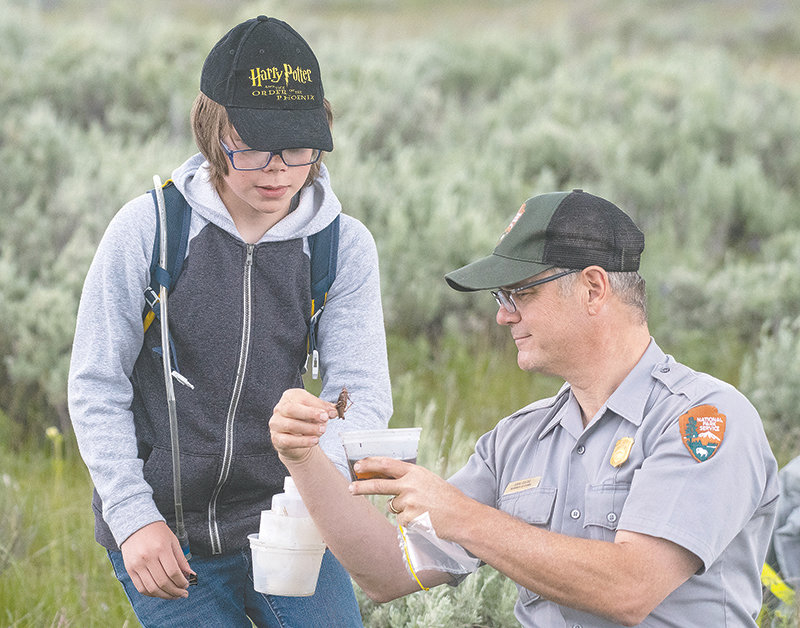 Anderson Lannoye, a 13-year-old from Bozeman, Montana, trains with Yellowstone National Park biologist Erik Oberg as they check out insects caught in traps at a climate monitoring site in the park. Lannoye is training with his mother, Olinda, and is the youngest citizen scientist in the group.
Tribune photo by Mark Davis 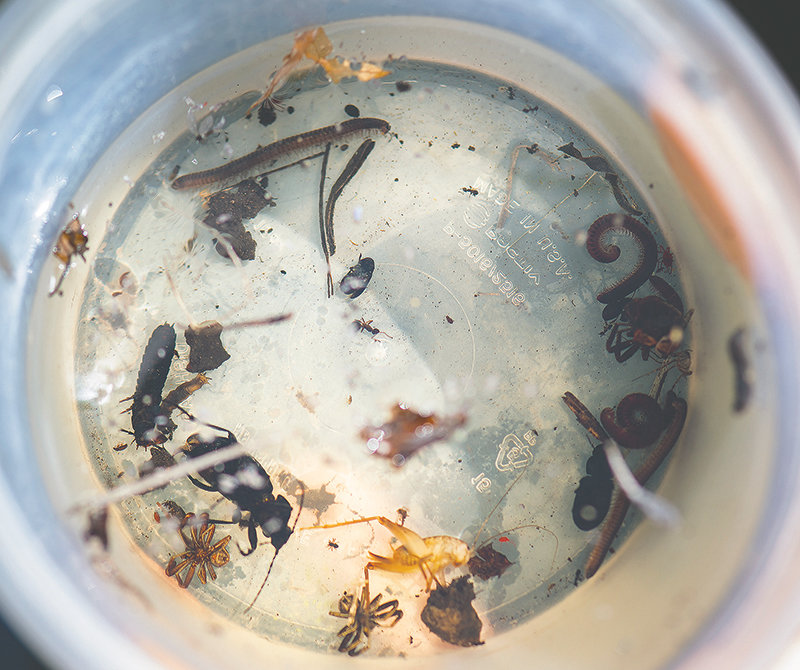 Insects caught in a trap are ready to be collected and identified at a climate monitoring site at Yellowstone National Park. There are seven monitoring sites in the park where flora and fauna are tracked to study climate change.
Tribune photo by Mark Davis
Previous Next
Posted Thursday, July 30, 2020 8:25 am
By Mark Davis

Anticipation was building as Erik Oberg sprung from his government issued SUV to unlock the gate to Mount Washburn. The planned destination promised an off-trail look at not only some of Yellowstone National Park’s most beautiful views, but also at its most ferocious creatures.

The possibility of a carcass in the area near Gut Road — where road-killed critters from the park are deposited — led to special instructions on safety and bear spray for all involved. Oberg, a natural resources management specialist for the National Park Service, warned the group to make sure they kept a watchful eye out for grizzlies while completing their assignments.

But toothy mammals weren’t the subjects being sought. Crew members were looking for a much more vicious species. And much smaller.

“I like to call them the charismatic microfauna of Yellowstone,” Oberg said.

In another word, bugs.

Insects are the main target of this study — especially carabid beetles. The species sits on top of the invertebrate food chain. They eat other insects, often by hunting them down at night. The adults are extremely fast, but even in the larval stage they’re voracious predators.

The beetles, as well as other species of flora and fauna, are also considered to be excellent environmental indicators.

Ready for their close up

Oberg has recruited about four dozen volunteer citizen scientists willing to dedicate their summers to collect, classify and count insects collected in pitfall traps in the park. Earlier this month, he led a caravan of vehicles to the highest monitoring site in the study. It’s near the top of Mount Washburn (10,200 feet), an area currently off-limits to the public due to construction. The group would’ve shared rides but for social distancing rules currently in place.

Oberg’s team of volunteers has been making the trip to the spot — as well as six other designated climate monitoring areas in the northern part of the park — for the past three years. In addition to his army of citizen scientists, there’s a newer member of the team traveling with the pack, toting arm-loads of bulky photographic gear. Kathy Lichtendahl’s assignment is to photograph the insects and plants within the monitoring sites — a task much easier said than done.

Prior to learning about the study, Lichtendahl was already obsessed with photographing bugs. “I’ve lived here for more than 25 years and I was seeing things for the very first time that were right under my feet,” she said.

The noted area photographer, from Clark, is a graduate of Northwest College’s Photographic Communications program. The program doesn’t have a chapter on photographing insects, but while there, Lichtendahl learned a lot about artificial lighting. That knowledge, along with her passion for bugs, is what helps separate her from the pack and gives her macrophotography its edge.

She’s also a passionate conservationist, often serving on boards, including recently on Wyoming Gov. Mark Gordon’s Migration Corridor Advisory Committee. She’s traveled the world photographing wildlife and landscapes, but now she can find exciting subjects by simply stepping outside. She’s essentially turning the tables on the so-called “pests,” going from being pursued to being the pursuer.

At first, the laborious task was frustrating. Then, as Lichtendahl started to get an eye for her subjects and started seeing patterns in their travels, the photos started to improve dramatically.

“I really feel like if you go in with good intentions, they sense it,” she insists.

Her motivation was to put the spotlight on creatures often maligned, but very much needed in the environment.

“I started discovering that they [insects] were disappearing around the world at increasing rates and realized this could be the greatest environmental disaster of my lifetime,” she said.

Last year, Lichtendahl started a chapter of like-minded folks on Facebook called, “Bugs are Beautiful.” So far, about 100 bug fans have joined. Her photos, with wonderful details, are combined with educational comments and articles. Members join in with their own photos and questions about large spiders and alien-looking creatures in or near their homes.

From pollinators to scavengers, bugs are needed to keep all environments healthy and provide food sources for other animals, she said. Lichtendahl has even tried eating a few bugs herself.

“When I called Erik [Oberg], he got very excited because, as he said, ‘We’ve got lots of pictures of dead bugs, but it’d be really nice to have some pictures of live bugs so people who come to the website can actually see these bugs in action as real living creatures — not just as specimens,’” she said.

A team of volunteers identifies and photographs the hundreds of species of insects collected in traps at the seven sites. Species of carabid beetles are diverse, found in nearly every ecosystem on earth, with more than 4,000 species in North America and 10 times that around the world. It’s also Lichtendahl’s nemesis species as she continues to work to find individuals on her twice-monthly volunteer trips.

Insects have relatively short life spans, making them highly sensitive indicators of environmental change — the main reason for the study. The team is also collecting information about key plant species at the sites, part of the Yellowstone Phenology Project.

Phenology is the study of nature’s calendar — not to be confused with phrenology, which is the debunked study of lumps on your head, Oberg said.

Trevor Bloom, community ecologist for The Nature Conservancy, started the phenology project at Grand Teton National Park near Blacktail Butte. The project mirrors years of work done by the famed conservationist and naturalist Frank Craighead in the 1970s and is documenting some significant changes in the climate over the past 50 years.

“We’ve been replicating [Craighead’s] study at Blacktail Butte and finding that the onset of flowering is about 17 days earlier on average than what he recorded in the 1970s,” Bloom said.

The impact of the changes are being studied in many species, including ungulates, birds and pollinators, but effects can be seen environment wide — from the speed and timing of snowmelt, severity of fire seasons and food sources for all creatures in the greater Yellowstone ecosystem.

Bloom and Oberg teamed up to start the phenology project at Yellowstone, with the work being added to the list of duties for the team of volunteers and running simultaneous to the insect study. While Oberg’s volunteers commit to the entire summer, working twice monthly, Bloom’s volunteers can join the Wildflower Watch project for a day.

The work is valuable and the citizen scientists take their job seriously.

Without volunteers, Oberg said his research in Yellowstone would be impossible.

“We simply could not do this project without assistance from citizen science volunteers,” he said. “Our volunteers typically contribute somewhere between 3,000 and 4,000 hours a year to this project, which is roughly equivalent to two full time paid employees. That’s not something that we would have in the budget to accomplish this work.”

Both studies are working within larger networks: the National Phenology Network and the National Ecological Observatory Network. The hope is combining studies across the country will help scientists better understand and forecast continental-scale environmental change.

Oberg’s study on carabid beetles ends this year, but he hopes to convince volunteers to continue the phenology study. Publishing results will take awhile.

“We won’t finish collecting specimens and plant observations until the snow flies in October,” he said, followed by six to nine months of contract identification work.

Publishing will likely be about a year from now, he said.

Volunteers can contact Oberg at Erik_Oberg@nps.gov or Trevor Bloom at trevor.bloom@tnc.org.