“Those animals are like tanks,” Wyoming Game and Fish Department game warden Travis Crane said. “I’ve seen them take a hit, roll over, get right back up and walk away,” he said.

But this bison wasn’t going anywhere, according to … 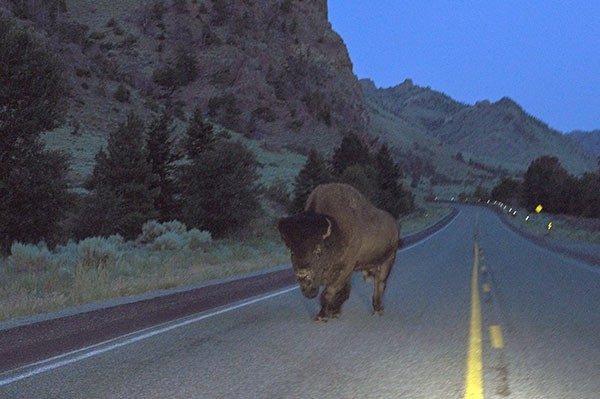 To protect fellow drivers, Cody photographer Steve Torrey stayed with this bull bison in the early morning hours of July 9 as it walked through a curve on U.S. Highway 14/16/20, just inside the Shoshone National Forest. It’s possible that this is the same bison that was hit by a vehicle and ultimately put down last weekend.
Photo courtesy Steve Torrey
Posted Thursday, August 10, 2017 2:41 pm
By Mark Davis

When a 1-ton bull bison met a vehicle on U.S. Highway 14/16/20 in the Wapiti area on Sunday, the results were somewhat different than usual.

“Those animals are like tanks,” Wyoming Game and Fish Department game warden Travis Crane said. “I’ve seen them take a hit, roll over, get right back up and walk away,” he said.

But this bison wasn’t going anywhere, according to Crane. The bison suffered severe head and leg injuries in the accident. It was on the highway at dusk on Sunday, walking in circles, a sign of the head trauma, and couldn’t be moved. Crane was forced to dispatch the bison after the Wyoming Highway Patrol deemed it a significant public safety hazard.

“We’ve had several we had to move. It was a tough winter for the critters,” Crane said.

Crane said he is sure they had moved the same bull at least twice this year before it wandered back onto the road, where it was struck and injured.

The bull was euthanized Sunday night just east of an outfitter shop, on the eastern boundary of Shoshone National Forest. The combination of a large, dark animal on the road at night can spell disaster for motorists and animals alike.

While he was trying to euthanize the bull, cars were whizzing by at a high rate of speed, Crane said. The game warden, originally from Thermopolis but now residing in Cody and employed with the Game and Fish for 13 years, said at least one bison is hit every year.

Earlier this year, a Ford F-250 was totaled after hitting another bull bison, Crane said. In that case, the bull wandered off, surviving the collision.

Cody photographer Steve Torrey said he came across a bull walking down the North Fork highway early on the morning of July 9. The bison was just inside the Shoshone National Forest on a curve that’s located near a formation known as Laughing Pig Rock.

“I felt I could not drive on by the situation as it would be irresponsible to do so knowing how fast the tourists drive around the blind corner,” Torrey recalled. “So I stayed with the bull, flashing my lights at approaching cars, most of whom slowed down.”

Mostly bulls wander out of Yellowstone National Park. The East Entrance to the park brings many tourists into the area — some seemingly in a hurry to get to their destination.

Last year, the Wyoming Department of Transportation generally changed the speed limit in the area west of Buffalo Bill State Park to the Shoshone National Forest boundary from 70 mph to 65 mph during daylight hours and 55 mph after dark. (The speed limit through the national forest is 50 mph.)

“It’s helped a lot, but unfortunately there are many in a hurry to get to the park,” Crane said. “People need to slow down and pay attention.”

Animals such as moose, elk, deer, bears and bison are on the move late in the day. The animals are tougher to see from dusk to dawn.

The bull put down on Sunday was removed by a front-end loader Monday morning. Amber Davis, a tourist from Lafayette, Indiana, whose goal was to see a bison and a bear, saw her first bison, legs in the air, en route to the East Entrance. At first her father thought they were moving a statue, but it became obvious it was real as they passed the scene.

“When I saw hair moving in the wind I knew it was real,” the 13-year-old said. Luckily, later that morning the family of three saw two grizzlies near Sedge Bay and planned to return to Yellowstone later in the week to search for upright bison.

When problem animals are dispatched in the area, the meat is donated to the Department of Family Services, Crane said. But not when they are hit by vehicles.

It’s illegal to collect animals killed in auto accidents in Wyoming. Several “roadkill bills” have been proposed in the Wyoming Legislature in recent years to allow citizens to retrieve dead animals and use the resources, but attempts to pass the law have failed several times. That included a 2017 bill sponsored by 11 representatives and three senators.