On Friday afternoon, two Powell boys got on their horses and rode through town — and stopped by McDonald’s — with a goat in tow.

“We just wanted to get out of the house and do something,” explained Joel Perez, 15. 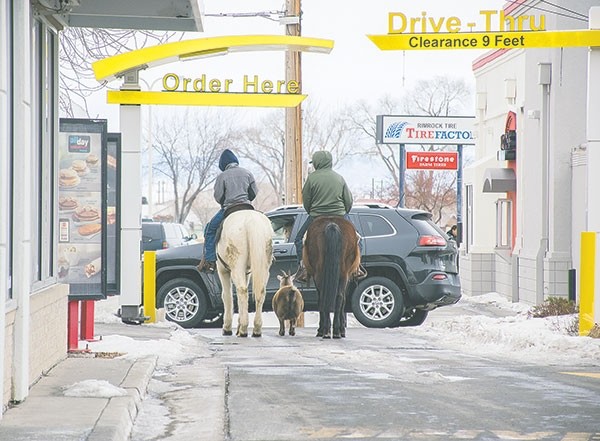 Trajen Collins (left) and Joel Perez drew attention in town and on social media when they rode their horses through the Powell McDonald’s drive-thru with a pet goat in tow last week. This photo had been shared more than 3,570 times on Facebook on Wednesday, reaching nearly 430,000 people.
Tribune photo by Toby Bonner
Posted Thursday, January 5, 2017 3:42 pm
By Tessa Baker

It looked like a scene from Old MacDonald’s farm instead of a McDonald’s drive-thru.

On Friday afternoon, two Powell boys got on their horses and rode through town — and stopped by McDonald’s — with a goat in tow.

“We just wanted to get out of the house and do something,” explained Joel Perez, 15.

Though born out of boredom, their outing ended up entertaining hundreds of thousands of people on Facebook.

The friends, who were on Christmas break, live near each other north of Powell. They hadn’t planned to take along a goat on Friday’s trip to town.

“We started going, and I guess the goat just wanted to come for a ride,” Perez said. “It just started walking right behind us.”

“Most the time you can’t even touch it,” Collins said.

Even though she wasn’t on a lead, Goat stuck by the teens’ side as they rode a few miles into town; she waited with them in the McDonald’s drive-thru. Perez ordered a couple of Hot ‘n Spicy sandwiches, but they didn’t get any fast food for the animals.

“We were thinking about getting the goat a salad, but that was it,” Collins said. “She ate grass a little bit earlier.”

They also stopped by Shopko and Family Dollar to get a bowl and water for the animals, Perez said.

The teens tied their horses outside the stores, but Goat remained untied.

“She just stayed with the horses,” Collins said.

While it isn’t unusual to see folks on horseback in Powell, the goat did turn some heads.

“There were a couple people who had to look a second time to see if that was really a goat or a dog,” Collins said.

The sight also drew the attention of thousands of other people across the country.

The Tribune posted a photo to Facebook that showed the goat standing between the two teens on horseback in the McDonald’s drive-thru on Friday. Within a few hours, the photo easily surpassed the Tribune’s most popular post of 2016.

By Wednesday, the post had reached more than 427,000 people on Facebook and had been shared by more than 3,570 users around the country.

“I’ve seen several photos like this over the years, but I must say (this is) the first one with a goat! Love it!” commented Judy Fossum of Montana. “You go boys!”

“Did it get the ‘kids’ meal?” quipped Janice Bailey of Powell.

“Good Lord, now my grandsons are gonna want to take their goat to town,” wrote Susan Pascoe of Powell.

Collins’ mom, Christy Tharp, said the boys had asked for permission to ride their horses, but she didn’t know they were going into town until she saw the Facebook post and “shenanigans” on Friday afternoon. (Perez and Collins said they didn’t get in trouble with their parents.)

The boys were surprised by the response on social media.

Both said they would ride their horses into town again.

“It was fun, but cold,” Collins added.