So — with the help of a helicopter crew, a couple trailers and a slew of personnel and volunteers — the Wyoming Game and Fish Department recently did the logical thing: capturing 24 sheep in the Devil Canyon area and shuttling 22 of them south … 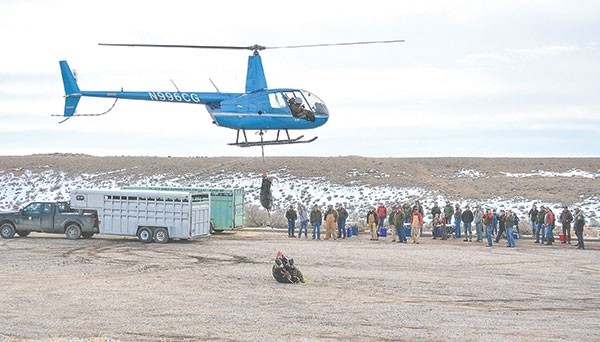 Native Range Capture Services pilot David Rivers eases a few bighorn sheep to the ground while Wyoming Game and Fish personnel and various volunteers prepare to hustle in and process them. A total of 22 sheep from the Devil’s Canyon herd were captured on Feb. 18, flown to the staging area near Bighorn Lake and then trucked south to the Ferris Mountains.
Tribune photos by CJ Baker 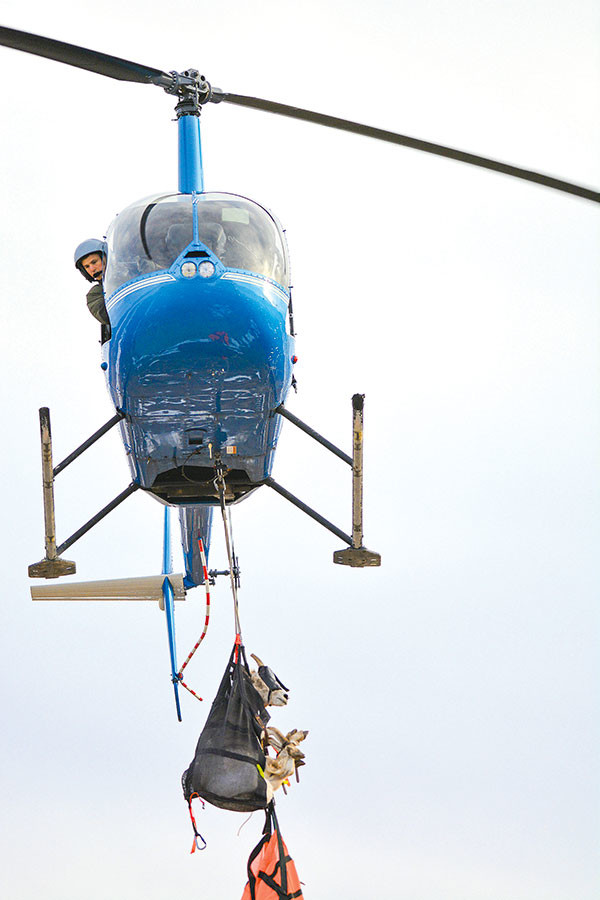 Native Range Capture Services pilot David Rivers checks his landing zone — near the Kane Boat Ramp and Bighorn Lake — while a few bighorn sheep hang suspended beneath the helicopter on the morning of Feb. 18. 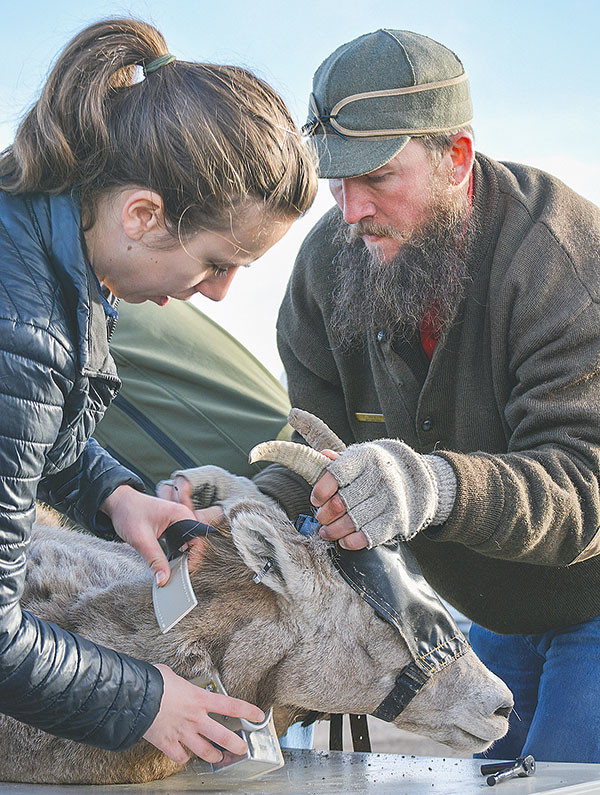 With the help of Wyoming Game and Fish Department Bighorn Basin brucellosis habitat biologist Eric Maichak, volunteer Megan Tashash (at left) straps a collar around a bighorn sheep on Feb. 18. 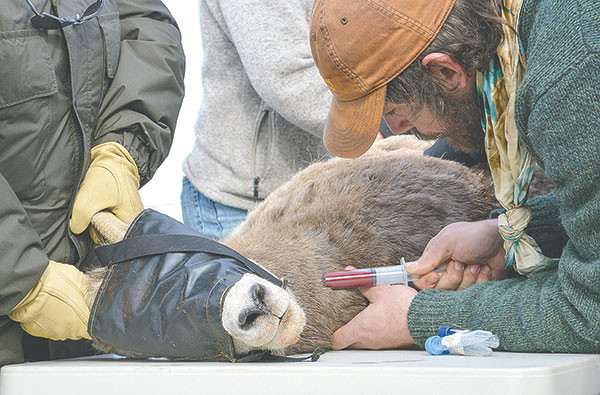 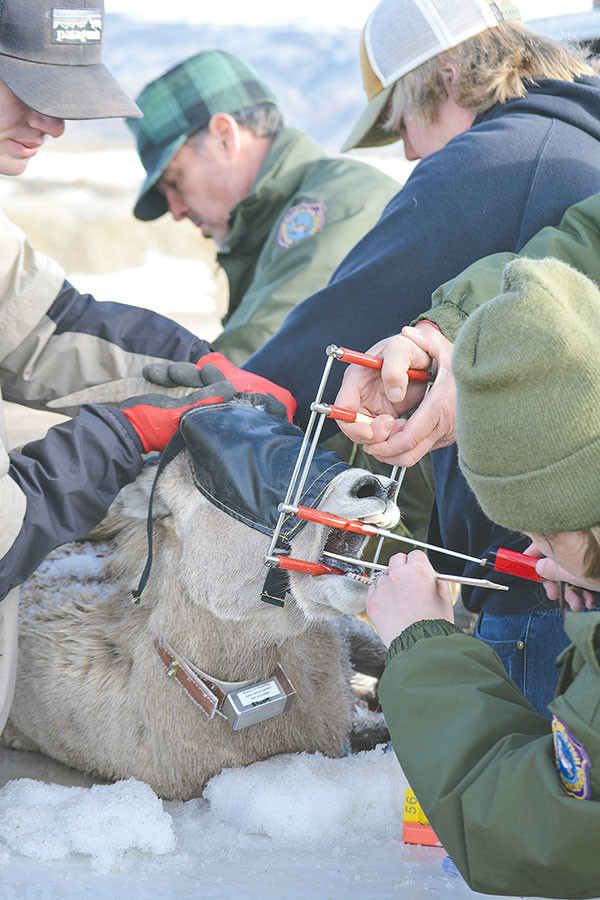 With the assistance of volunteers, Wyoming Game and Fish Department personnel inspect the mouth of a captured bighorn sheep on Feb. 18. 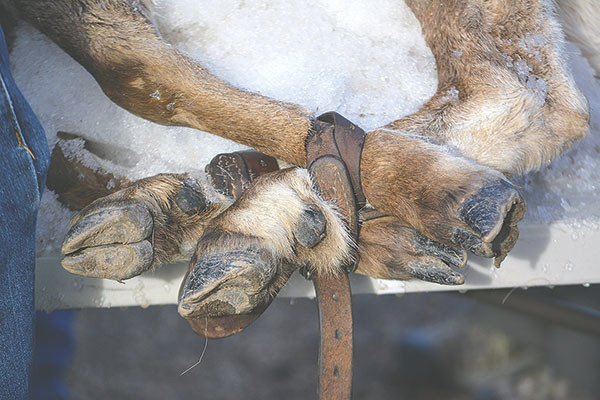 After being captured, bighorn sheep were temporarily tied up to help keep them still as they were flown from Devil’s Canyon to a processing area near the Kane Boat Ramp.
Previous Next
Posted Tuesday, February 28, 2017 3:52 pm
By CJ Baker

Devil Canyon, east of Lovell, has too many bighorn sheep; the Ferris and Seminoe Mountains, northeast of Rawlins, have too few.

So — with the help of a helicopter crew, a couple trailers and a slew of personnel and volunteers — the Wyoming Game and Fish Department recently did the logical thing: capturing 24 sheep in the Devil Canyon area and shuttling 22 of them south to the Ferris-Seminoe area on Feb. 18.

“Right now, we’ve got the habitat and they’ve got the surplus sheep; we might as well put the two together,” explained Greg Hiatt, the Game and Fish’s Sinclair-based wildlife biologist, who oversees the Ferris-Seminoe herd.

The department planned to capture 15 more sheep on Wednesday, but called that off when some very preliminary testing indicated one of the captured ewes might have died of pneumonia. Ultimately, however, it was determined to be a false alarm: more advanced tests showed no signs of bacterial pathogens and the Game and Fish’s laboratory concluded the sheep died of “capture myopathy” — “which is basically stress,” said Leslie Schreiber, a Greybull-based wildlife biologist.

As of Monday, wildlife managers hadn’t decided whether they will be able to reschedule the canceled capture operation or stand pat for the time being.

The Game and Fish Department wants to keep the Devil’s Canyon herd between 140 and 210 animals. But over the past three years, managers have counted an average of 213 sheep; further, in a July 2016 flight over the Canyon, Schreiber said she counted 253 sheep — and there could be more she didn’t see.

“We want to address these sheep before they grow even larger,” Schreiber said.

If the herd continues to grow, it could spread out and potentially mix with either domestic sheep in the area or another wild herd in Shell Canyon to the south — potentially exposing the Devil’s Canyon herd to new diseases.

Schreiber says that, even among the relatively close bighorn sheep populations in Shell and Devil Canyon, the herds have different bugs.

“Something’s going on with the Shell Canyon herd where … something is limiting that population — and I suspect it is disease,” Schreiber said, noting that the herd has been stuck between 20 and 25 sheep for more than a decade.

Part of what makes the Devil’s Canyon sheep a good fit for transplanting to other parts of the state is that “they are free of the bacteria that worry us,” Scheiber said.

While there are researchers studying possible birth control methods for bighorn sheep, Schreiber said that right now, the department’s two major tools for driving down the size of a herd are hunting and transplants like the one carried out this month.

The capture process generally begins with the helicopter pilot spotting a group of sheep and working them into a group, explained crew member Cedar Hincke. The pilot then pushes them up a hill or through a patch of snow to slow them down, because “when we shoot a net on them, they take a tumble,” Hincke said. (One ewe died of trauma it suffered during capture, the Game and Fish said.)

The pilot usually gets within about 20 feet of the sheep so the net-gunner can take the shot; a “mugger” then drops out of the craft to secure the animal, trying to get the blindfold on as quickly as possible.

“They calm down a lot once you do that,” Hincke said.

They’re then tied up (or “hobbled”), bundled up and hooked on to the base of the helicopter for transport.

In this case, the sheep were dropped off near the Kane Boat Ramp, where a couple dozen people sprang into action as soon as the chopper pulled away. They included Game and Fish personnel and family, other government agencies and volunteers from Powell High School science teacher Wendy Smith’s classes and the Wyoming Wild Sheep Foundation.

While job one was to simply ready the sheep for their trip south, the Game and Fish department also took the opportunity to gather a slew of data about the local herd.

Before the ewes and a couple rams were loaded up, workers collected blood samples (to be analyzed for pregnancy, levels of trace minerals and respiratory viruses), nasal and tonsil swabs (to look for disease-causing respiratory pathogens), ear swabs (to check for mange) and fecal samples (to be checked for intestinal parasites and lungworms), said Edwards, the disease supervisor.

The department has taken measurements and samples from roughly 600 sheep across the state over the past five years, he said.

“Once we’ve got a good handle on what pathogens are present in which herds and how those herds are doing, then the overall goal is to sit down and say ‘alright, in this herd, is this pathogen limiting reproduction or lamb survival,’ or whatever you want to say,” Edwards said.

However, he doubts that researchers will ultimately be able to reach that kind of firm conclusion, where a herd’s health can be reduced to a single factor.

“That was our hope, but the farther we get into it, the more we realize it’s not that simple,” Edwards said.

“There’s so many things that we don’t really have a good handle on, that all kind of interact. And it’s all those things that determine how a herd responds to respiratory disease, or stiff winters, or whatever stress they happen to endure,” he added. “And most of our herds, honestly, do real well.”

Edwards still sees the data as having “really good value.” For example, it’s showed the department that the Devil’s Canyon herd is generally free of respiratory pathogens.

“If we didn’t know that, you certainly wouldn’t want to take these sheep and move them to another population, particularly if there’s already sheep there, because that’s a big mistake,” Edwards said.

It’s not just its health that makes the Devil’s Canyon herd the right fit for the Ferris-Seminoe area; it’s also the similar elevation.

Decades ago, when the Game and Fish started really getting serious about trying to re-establish bighorn sheep in the Ferris-Seminoe area, the department brought in a couple hundred sheep from the Dubios area, said Hiatt, the Sinclair-based biologist. But wildlife managers came to realize that the sheep from Dubois, accustomed to living at 11,000 feet in elevation, gave birth to their lambs in June. That’s a problem in the Ferris-Seminoe mountains, which sit a much lower elevation of 7,000 to 8,000 feet above sea level, and where moisture and vegetation levels are sinking in June.

“In this country, we’re almost always brown by the Fourth of July,” Hiatt said. “So by the time those lambs were a month old, mom was on a diet that barely allowed her to maintain herself, much less produce extra milk.”

He explained that, “the sheep (from Dubois) lasted, but their lambs, we were lucky if we got one or two lambs a year (that survived), so the herd slowly dwindled away as the sheep got older and older and eventually disappeared.”

Enter then, the lower-elevation sheep, which have their lambs at the end of April and first part of May.

“So they’ve got all of May to look forward to to keep the milk production up — and hopefully a little bit into June,” Hiatt said.

Prior to the arrival of the transplants from the Devil’s Canyon herd, around 130-150 bighorn sheep were believed to be living in the Ferris-Seminoe area, with an objective of 300.

Hiatt said that, despite their professional demeanors, the Game and Fish personnel working on the Feb. 18 operation were thoroughly enjoying the chance to handle the “beautiful” bighorn sheep.

“This,” he said of the hands-on experience, “is why we got into these professions.”