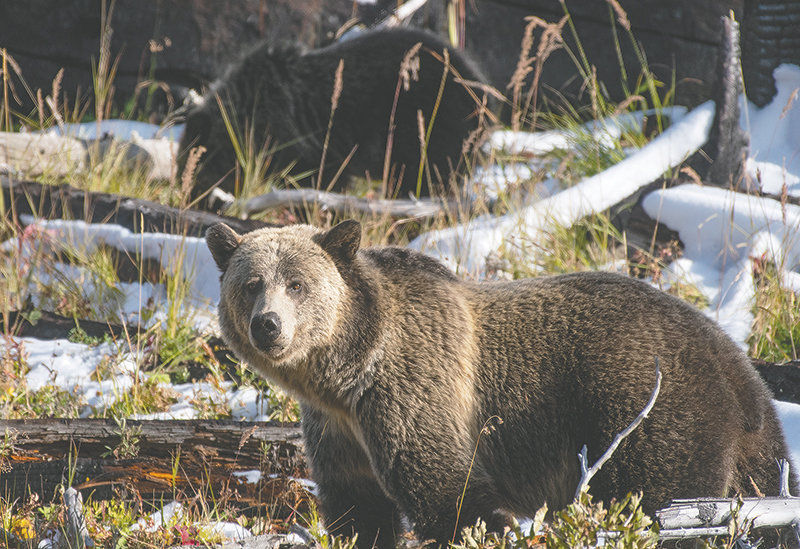 A sow grizzly and her cub browse for insects under a blanket of snow in Yellowstone National Park on Tuesday. New legislation to delist the species — pushed by Wyoming senators John Barrasso and Mike Enzi — is moving through committees in the U.S. Senate.
Tribune photo by Mark Davis
Posted Thursday, September 10, 2020 8:25 am 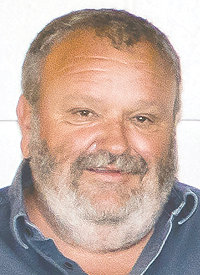 A coalition of environmental groups and Native American tribes — who persuaded courts to reinstate endangered species protections for the greater Yellowstone area’s grizzly bears — say the federal government should be ordered to pay $1.4 million to cover their attorneys’ fees and costs.

The groups sued when the U.S. Fish and Wildlife Service attempted to delist the region’s grizzlies in 2017, successfully arguing to a U.S. District Court judge in Montana that federal wildlife managers had failed to follow the law. Fish and Wildlife appealed that 2018 ruling, but the Ninth Circuit Court of Appeals generally backed U.S. Judge Dana Christensen this summer and sent the delisting process back to the drawing board.

With the legal case now closed, the prevailing environmental groups, tribes and individuals — which include the Sierra Club, WildEarth Guardians, Crow Indian Tribe and more than a dozen others — are seeking to recover the costs associated with the thousands of hours of work put in by their attorneys. Both the Equal Access Justice Act and the Endangered Species Act include provisions that allow prevailing parties to recoup their costs, with the thought that they’re doing a public service by holding government accountable to the law.

However, the vice president of the Wyoming Game and Fish Commission testified in a U.S. Senate committee hearing Wednesday that the “vast amounts” of money pulled in by environmental organizations for opposing the removal of species from protection under the Endangered Species Act is one of the reasons only 2% of species listed has been removed from the list.

Pat Crank, an attorney from Cheyenne, said environmental groups can generate “incredible” revenue by challenging any delisting, “no matter what the facts are.”

Not only is litigation popular with donors, Crank said during a Senate Committee on Environment and Public Works hearing, but lawyers are seeking increasingly high reimbursement for their fees.

“If they’re successful in Endangered Species Act litigation, all their attorney fees get paid,” he said, specifically mentioning the $1.4 million being sought in the grizzly delisting case.

Crank also faulted the ability of litigants being able to “handpick” the judge that will handle their appeal. “That leads to very few delisting decisions being upheld by the court,” he said. “And the judge substitutes his political judgment for those of scientists.”

“The grizzly bear in the Greater Yellowstone Ecosystem is fully recovered. End of story,” Barrasso, the chair of the committee, said in his opening statement. He added that the “commitment of time and resources cannot continue if the state’s good work is simply ignored by liberal courts.”

Enzi made similar remarks about the “fully recovered” species.

“Wildlife experts and federal officials agree that the grizzly bears in Greater Yellowstone Ecosystem have been fully recovered for years. Senseless litigation still continues to hinder the effective state management and protection of the species,” Enzi said. “We cannot let this be another decision made by out-of-touch courts, carefully chosen courts, rather than science, common sense and states that have the ability to effectively manage and protect species.”

However, Sen. Tom Carper, D-Del., said the proposed legislation is the wrong way to resolve the long debate over whether Greater Yellowstone Ecosystem grizzly bears continue to warrant federal protections.

“Congress should not intervene in the final determination on the recovery of this species or any species for that matter,” Carper said. “At this time. judicial review of agency decisions is central to ensuring that the Endangered Species Act is guided by science and informed by public input.”

John Leshy, Professor Emeritus at the University of California’s Hastings College of the Law, also defended the legal system. He said one reason for long stays on the list is because species are only listed when threatened with extinction.

“The Endangered Species Act has been quite successful in that almost no species that ever makes it on the list actually goes extinct,” Leshy said. “But by the time they get there, they are so much in peril that it takes enormous amount of effort.”

For his part, Barrasso said the act would give states the authority they need to manage the grizzly bear. “It will recognize the full recovery of the grizzly bear and delist it once and for all.”

Long an advocate of ammending the Endangered Species Act, Barrasso pointed for the need to give states management authority, saying as grizzly bears have recovered, conflicts with humans have increased.

“By July 1, seven people were attacked and injured by grizzly bears in the Greater Yellowstone Ecosystem —more than the first six months of any other year since data began being collected in 1992,” he said. “This is a higher total than six of the previous 10 years and [an] unsettling trend since over 80% of the conflicts generally occur in the second half of the year.”

The Fish and Wildlife Service again removed the grizzly bear from the endangered species list in June 2017, citing a significant increase in bear populations and a doubling of their range land, but Judge Christensen reversed the decision in September 2018.

U.S. Rep. Liz Cheney, R-Wyo., introducted the Grizzly Bear State Management Act in the House (H.R. 1445) last year, with U.S. Rep. Greg Gianforte, R-Mont., as a cosponsor. Cheney said she introduced the legislation to reinstate the original, science-based decision by the U.S. Fish and Wildlife Service to delist the grizzly and prevent future court action on the delisting. The bill remains in committee.

As for the Senate version of the legislation, “the hearing record will remain open for several more weeks as senators have the opportunity to ask written questions and receive written responses from today’s witnesses,” according to Mike Danylak, a spokesman for the Senate Committee on Environment and Public Works “After those responses are complete, the committee will review them before taking action on the bill.”

(CJ Baker contributed reporting. This version has been updated and corrected who is sponsoring which legislation and clarify that S. 614 and H.R. 1445 are the same bills.)