Although construction likely remains a couple years away, a firm is moving forward with plans to build the first-ever solar farm in Park County. 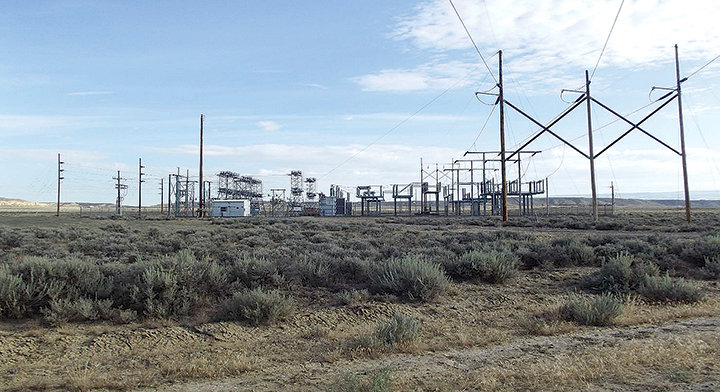 A pair of planned solar photovoltaic facilities are expected to hook into this Rocky Mountain Power substation outside of Frannie. The facilities, planned for construction in 2023, would be the first significant solar projects in the area, spread across more than 93 acres of land.
Photo courtesy Park County Planning and Zoning Department
Posted Tuesday, December 29, 2020 8:46 am
By CJ Baker

Although construction likely remains a couple years away, a firm is moving forward with plans to build the first-ever solar farm in Park County.

Over the summer, a Salt Lake City-based developer secured county approval to build two 20-megawatt solar photovoltaic facilities outside of Frannie. By the end of 2023, the developer plans to install tens of thousands of solar panels across 93.5 acres of remote, privately-owned land.

While the solar project would be the first of its kind in Park County, “for us, this is a very small project,” Energy of Utah President Ros “Rocco” Vrba told county planning and zoning board members in August.

Vrba was involved in the construction of Wyoming’s first utility-scale solar facility: an 80-megawatt site that sprawls across 720 acres of Bureau of Land Management property in Sweetwater County. It became operational in 2019 and other Energy of Utah-led projects have come online in Wyoming since then.

The site in Park County, located about 2 miles southwest of Frannie, is far from any residences. Vrba said the spot was chosen carefully during two years of discussions with the landowners, Dale and Peggy Neff.

Perhaps most critically, the property sits close to a Rocky Mountain Power substation, so the power from the solar facilities can easily be pushed onto the electrical grid.

Energy of Utah submitted applications in early July and Park County commissioners unanimously approved special use permits for the solar projects in September.

Construction isn’t expected to begin until early 2023, but Vrba said he needed to have the county permits in-hand before approaching investors.

“... Without permits, you just don’t get any money,” he said in August.

Not a job maker

The Frannie project consists of two separate but effectively identical facilities that will be constructed at the same time, Vrba said.

As for why the project was split up — one through a Frannie Solar LLC and the other through Frannie Solar II LLC — Vrba said that’s because facilities 20 megawatts or less qualify for small generator interconnection agreements. Those agreements are faster, cheaper and easier to obtain from utilities, he said.

Of course, “small” is relative: While a residential roof might fit 15 solar panels, Vrba said the Frannie facilities will contain roughly 156,000 panels between them.

While the facilities are being constructed, there may be 50 to 60 workers on site, and Vrba said his firm tries to hire local crews.

“Everything we can get from local [businesses], that’s what we usually do,” he said.

In the long run, however, “these things are really not job-makers,” Vrba cautioned. Once the solar facilities are up and running, he said there will be three technicians and one administrative employee, who will all need to live within 45 minutes of the site. Part of the routine work, he said, will involve washing the panels every few months.

The panels will be anchored by helical piers driven about 3 feet into the ground and will stand about 8 feet high, Vrba said, rotating throughout the day to track the path of the sun. While hail poses a threat to the equipment, he said snow shouldn’t be an issue.

Vrba also noted that the photovoltaic facilities are only temporary, as the land will be reclaimed once the panels wear out. Their production dips by about a half-a-percent each year, he said, making for a roughly 35-year life expectancy.

The first of its kind

Land planners have not been anticipating many solar projects in the region. In a 2003 assessment, the federal Bureau of Land Management concluded that no locations in the Big Horn Basin receive 6 or more kilowatt hours per day of solar energy.

“As a result,” the BLM wrote in its exhaustive 2015 Resource Management Plan, “the potential for development of solar resources in the [Basin] is not likely.”

A draft of Park County’s own Natural Resource Management Plan, composed by a private consultant and released earlier this month, parroted that language from the BLM. However, the solar industry and the associated technology have changed dramatically since the BLM’s assessment nearly two decades ago.

“The sun in Park County is [certainly] of commercial value in today’s market,” Vrba said in an email last week.

He told planning and zoning members in August that the cost of solar energy and battery storage has probably fallen somewhere between 200% and 300% over the past five years.

“So that’s why we can compete against fossil fuels any day; in fact, this is cheaper than fossil fuel by 30%,” Vrba said, adding, “It’s a new way of generation.”

Very roughly figured, the two Frannie facilities could potentially produce enough electricity to power around 8,500 homes. Vrba said Battery Energy Storage Systems (BESS) will allow the facility to supply power to the grid for an extra four or so hours after the sun sets. When needed, the solar arrays will be able to draw power from Rocky Mountain Power, a PacifiCorp subsidiary.

Before construction can start, Frannie Solar I and II will need to meet a handful of county-imposed conditions. They include completing a long-term noxious weed control plan (particularly given the broad area being impacted), submitting a geotechnical study to the county engineer and providing construction plans to planning and zoning staff.

But the project isn’t the only renewable energy project to arrive in the area: After years of delays and changes in ownership, PacifiCorp worked last summer to construct a 114-turbine Pryor Mountain Wind farm south of Bridger, Montana — not far north of Frannie.

In an email last week, Vrba said Energy of Utah has not fully launched its drive for investors on the Frannie Solar projects, calling it “a bit early.” Currently, he said, the company is working with PacifiCorp on interconnection studies.

Vrba complimented Electrical Consultants Inc. (ECI) of Billings for its assistance on the Frannie projects, as well as the professionalism of county officials.

“We are very excited to see these sites coming [to] fruition in upcoming years,” he said.