Lamar Outdoor Advertising, the owner of the billboard — but not the message — chose to remove the graphic billboard Friday morning, less than 72 hours after the sign went up.

The sign was sponsored by an unknown number of anonymous … 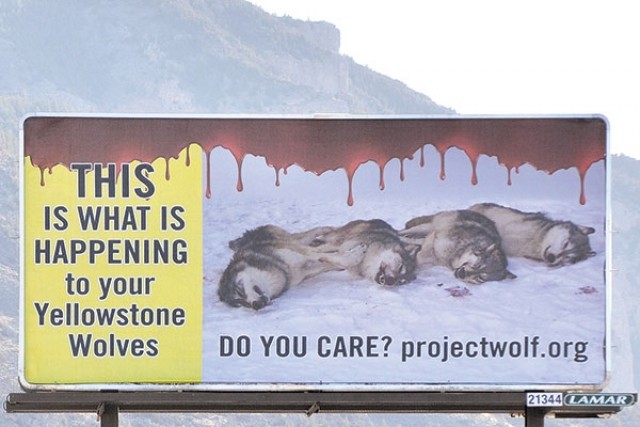 This billboard, posted on Cody’s west strip, was removed Friday by Lamar Outdoor Advertising after an outcry over its goriness and a lack of information about the organization sponsoring it, ‘Project: WOLF.’
Tribune photo by CJ Baker
Posted Tuesday, May 7, 2013 1:44 am
By CJ Baker

A provocative billboard opposing hunting and trapping of the region’s wolves was abruptly removed last week after an outcry from the Cody community.

Lamar Outdoor Advertising, the owner of the billboard — but not the message — chose to remove the graphic billboard Friday morning, less than 72 hours after the sign went up.

The sign was sponsored by an unknown number of anonymous individuals and groups who refer to themselves as “Project: WOLF” and have the stated aim to stop the hunting — specifically the trapping — of wolves; the group’s site refers to the practice as “murder.”

The primary feature of the billboard, erected near the South Fork turn-off on Cody’s west strip, was a photograph of four dead wolves with some blood on the snow beneath them. Tribune research of the photo indicates the image is an altered version of a hunting photo reportedly taken in Alberta, Canada at least a year and a half ago. The image appears to have been manipulated to be slightly more bloody. Illustrated blood also dripped down from the top of the sign. It was accompanied by the text, “This is what is happening to your Yellowstone wolves. Do you care? projectwolf.org.”

The sign went up Tuesday afternoon, and by Wednesday morning, Lamar’s regional manager in Casper, Korbe Palmer, was getting phone calls from irate citizens.

South Fork resident Geri Hockhalter, who co-owns Timber Creek Outfitters with her husband Tim, was one of those who rallied locals to ask Lamar to take down the sign.

“Would you like your children or grandchildren seeing this every time they go home to South or North fork, or even the tourists who come each year?” Hockhalter asked in an email she widely distributed. “I didn’t think so.”

Hockhalter sent a message to Palmer with her concerns.

“I admit this ad was pushing the limit but myself and (general managers) in two other states felt it wasn't too offensive to run,” Palmer replied in a Wednesday email to Hockhalter. Palmer added that the advertisement “doesn’t in any way, shape, or form represent the opinions of Lamar.”

The controversy kept growing, however, even becoming a topic of some concern at a Cody City Council meeting. Palmer told the Tribune on Friday that he’d received more than 150 emails complaining about the sign, with one in support. He also was barraged with calls at the office and on his cell phone Thursday night, as he tried to watch the NBA playoffs.

“I finally just turned my phone off,” Palmer said.

With the negative comments continuing to pile up and the group’s backers insisting on remaining anonymous, Lamar reversed course Friday.

“I just told her (the ad buyer) that I thought it was in the best interest of Cody as a community and Lamar to cancel the contract and take the ad down,” Palmer told the Tribune. The company even hired a local contractor to remove the sign that day, rather than wait a week or so for a Lamar employee to be in the area.

Palmer said the blood and gore were factors in taking it down along with “the organization not standing behind their ad.”

When the complaints began rolling in, Palmer said he had contacted Colorado Wolf and Wildlife Center owner Darlene Kobobel, who signed the contract for the billboard. Kobobel asked Palmer to refer callers to wolf advocacy group HOWL Colorado. HOWL Colorado, however, soon released a statement saying that, while it was happy to speak to the media about wolf management and supported the billboard, it had “nothing to do with the billboards” and couldn’t answer questions about them.

When Palmer then directed the Cody Enterprise to Kobobel, she denied having paid for the billboard, the newspaper reported.

“It was the point that I felt we were being deceived, and a game was being played,” Palmer told the Tribune.

In an email to the Tribune, Kobobel said “there was no deception about who was sponsoring the billboard” and that while her Colorado Wolf and Wildlife Center supports Project: WOLF, it did not design, fund or organize the campaign.

“Regardless of who might sign a contract or mail a check, the source of the money to pay for the billboard was always represented as anonymous donors,” Kobobel said.

She said the Colorado Wolf and Wildlife Center was disappointed the sign was removed.

“We feel that freedom of speech should not be selectively applied,” Kobobel said. “You either believe in upholding the constitution, or not.”

She said Lamar supported the ad until the backlash.

Kobobel likened Project: WOLF to Occupy Wall Street, describing it as an umbrella movement “used by groups and individuals to promote pro-wolf projects.” She said it was the decision of Project: WOLF members from across the country — including “numerous” donors in Cody — to go with the image of the dead wolves instead of non-graphic one used elsewhere.

Kobobel referred questions about Project: WOLF’s next steps to the project itself. However, Kobobel did not provide any contact information for the project and the organization’s anonymously-registered webpage provides no means of contacting the group.

The group describes itself as “a groundswell of outrage and emotion which ties thousands of individuals, hundreds of groups and sanctuaries together with a unified message: Protect our wolves!”

The image chosen for the billboard appears to have been edited from a photograph that was posted online in late 2011. It’s been altered to not only remove two men, vegetation and a vehicle, but also to copy an additional bloodstain on the snow below one of the wolves. (The changes can be viewed at the end of this story.)

A message sent to Project: WOLF’s Facebook page and to an email address a project supporter listed as a contact point about the edits to the photo went unanswered as of press time Monday.

The lack of contact information was one of things that upset local residents, said Cody Mayor Nancy Tia Brown. She briefly brought up the sign at the council’s Thursday evening meeting. Brown said that after getting complaints from residents, she had been anxious to see if there was anything the city could do about the billboard. The answer from legal counsel and staff was no, because of First Amendment rights to free speech.

“That is frustrating when there’s something that you know is obviously distasteful to your community, but that’s what the Constitution protects on both ends,” Brown said. She described the sign as inflammatory and one-sided.

With the city unable to do anything, “I’m certainly glad that Lamar stepped up” and took the sign down, Brown said Friday. “I think that was a good business decision on their part.”

“I didn’t sleep the last couple nights,” Lamar’s Palmer said, also on Friday. “But there’s been an overabundance of people since the sign has come down that have thanked us and claim that we’ve done the right thing and Lamar is kind of back in their good graces.”

HOWL Colorado speculated on its webpage that if 150 supporters of the Project: WOLF billboard had contacted Lamar, the sign would still be up.

Palmer said the company initially accepted the advertisement because it’s been hit with lawsuits over the years.

“We have to walk a very fine line between what we allow to go up versus what we turn down,” he said. Palmer said he wouldn’t be surprised if some litigation comes from the company’s decision to pull down the ad.

Identical Project: WOLF signs have been posted near Rexburg, Idaho, and Bozeman and Red Lodge, Mont., and have been up for some time. Those ads are out of Palmer’s jurisdiction, but he said his understanding is that they had generated few complaints. An online image that couldn’t immediately be verified indicates the sign outside Rexburg was vandalized after it went up.

Another wolf advocacy group, Predator Defense, will launch a billboard in Cody the week of May 27. Palmer said that ad is expected to be tasteful.

Meanwhile, Dustin Rosencranse of Cody said a group of concerned citizens is considering buying billboard space of their own that would show moose and ask, “Where are these in Yellowstone?” The sign would direct visitors to a website with facts about where wildlife levels were before the wolf’s reintroduction and where they are today.

Like the Project: WOLF billboard, Rosencranse said the image would be primarily targeted at visitors to Yellowstone National Park since “pretty much the majority of people that live here feel the same as all of us.”

The above video shows the apparent original image and the version used for the Project: WOLF billboard.