It has been over 50 years since Worland native and Vietnam veteran Alva R. Krogman, better known as Ray, disappeared over Laos. This week, he returned to Worland and his final resting place. 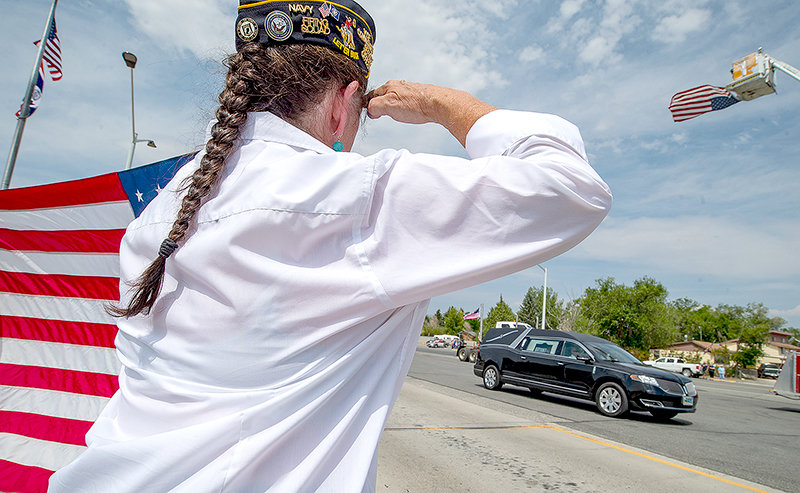 Katy Jones, vice commander of American Legion Post 26, salutes as the hearse carrying Worland native and Vietnam veteran Alva R. Krogman passed through Frannie Monday. After being shot down over Laos in 1967, Krogman’s remains were returned to Worland and his final resting place this week.
Tribune photo by Mark Davis 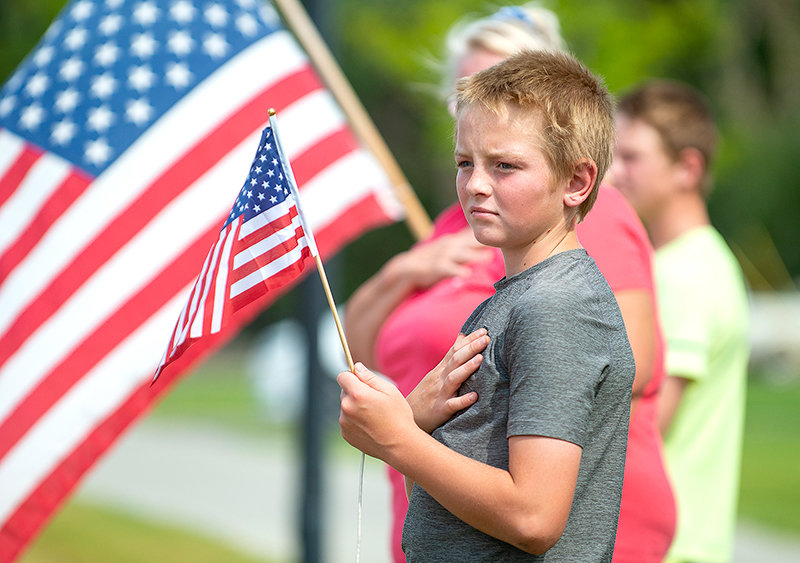 Cache Thompson places his hand on his heart as the remains of Alva R. Krogman pass through downtown Cowley Monday. From Billings to Worland, residents came out to pay their respects to the Vietnam veteran, who died in 1967.
Tribune photo by Mark Davis
Previous Next
Posted Thursday, July 22, 2021 8:20 am
By Avery Howe, Northern Wyoming News Via Wyoming News Exchange

It has been over 50 years since Worland native and Vietnam veteran Alva R. Krogman, better known as Ray, disappeared over Laos. This week, he returned to Worland and his final resting place.

A member of the 504th Tactical Air Support Squadron, First Lieutenant Krogman was on a visual reconnaissance mission over Savannakhet Province, Laos on Jan. 17, 1967.

Krogman’s job was to fly with another spotter plane in search of targets for tactical jet fighter planes and to mark the targets with smoke rockets. Krogman’s aircraft was struck by enemy fire and crashed. His last transmission was, “I’m hit.”

Accompanying his Distinguished Flying Cross Award, a note reads that “Lieutenant Krogman managed to warn his wingman in time for them to make evasive action.”

The lieutenant’s mother, Lue Krogman, was informed that his body could not be recovered and he was labeled missing in action. A few days later it was determined that he could not have survived the crash, and Krogman’s status was changed to killed in action. The 25-year-old was awarded the Air Medal and Purple Heart.

Lue Krogman remained hopeful that her son might come home.

In a 1988 interview, she told the Northern Wyoming Daily News that, “Ray had a great desire to make the world better. He was so sincere about it. He worked so hard for a future. Of course I believe he is alive.”

Ray’s niece, Kelly Steindorf, recalled that her grandmother Lue “used to have a teeny Christmas stocking, and every year she would write Ray a little note [like] ‘Missing you,’ ‘wish you were here,’ or ‘it’s been another year.’ She would write it on a Christmas present tag, so she had several of those tucked into a stocking that always hung on her Christmas tree.”

Lue passed in 1990 at the age of 79 and Steindorf said Ray’s stocking now decorates her own Christmas tree.

“That is something that was always a part of my Christmas routine,” she said.

Over the years, the family received reports on the search for Krogman’s remains, but they always turned up fruitless.

Then on Feb. 14, 2019, a scientific recovery expert working on Krogman’s crash site in Ban Kok Mak, Laos, reported the recovery of possible remains and material evidence. The Defense POW/MIA Accounting Agency (DPAA) later recovered additional remains, which were consolidated and identified as belonging to Krogman in July 2020.

“I was only 6 when he passed, but I only had good memories; he was the fun uncle,” she said. “It has been kind of a treasure hunt for our family since finding out that they found him, we were able to go back and see more about what he did in his younger years.”

Krogman was a part of the Worland High School Class of 1959, class president, center for the football team, a member of the National Thespian Society and an Eagle Scout.

Steindorf said Krogman was a part of Troop 3, and there were three other scouts in a photo she has of him, along with the scout master.

“We have all different certificates and whatnot about him being successful here, there and everywhere,” Steindorf said.

Roy, Krogman’s older brother, had been in the service and Ray was excited to follow in his footsteps. After a year in Prep School, Ray Krogman made it into the Air Force Academy and graduated with the Class of 1964. While Krogman never got a chance to start his own family, he had a girlfriend he had met while stationed in Dover, Delaware, that the family believed he had intentions to marry.

“We’ve got different pictures and letters that he had written. He was excited about what he was doing, he was very pleased and proud to serve his country, and was fully expecting to come home,” Steindorf said tearfully.

Krogman is honored in memorials across the country.

After so many years away from home, Krogman reached his final resting place on Wednesday in Worland.

Krogman’s remains were flown into Billings Monday and placed in a casket, then escorted to Worland by the Patriot Guard Riders through Frannie, Deaver, Cowley, Lovell, Greybull, Basin and Manderson. Law enforcement personnel from each community joined in the escort, with citizens lining the streets to pay their respects.

On Wednesday — which had been proclaimed Alva R. Krogman Day in Worland — services were held at the Worland Middle School Auditorium, followed by a graveside service with full military honors and an Air Force flyover at Riverview Memorial Gardens in Worland.

Gov. Mark Gordon ordered both the U.S. and Wyoming state flags to be flown at half-staff across the state from sunrise to sunset in Krogman’s honor and memory.

His remains were interred near his parents Marx and Lue Krogman, in a spot Lue reserved for him.