On Saturday, some 65 scouts from Lovell, Cody and Powell (Troop 26) underwent training on how to persevere when temperatures plunge and snow is deep. At Camp Buffalo Bill, the boys learned to evacuate a victim of a backcountry injury using the … 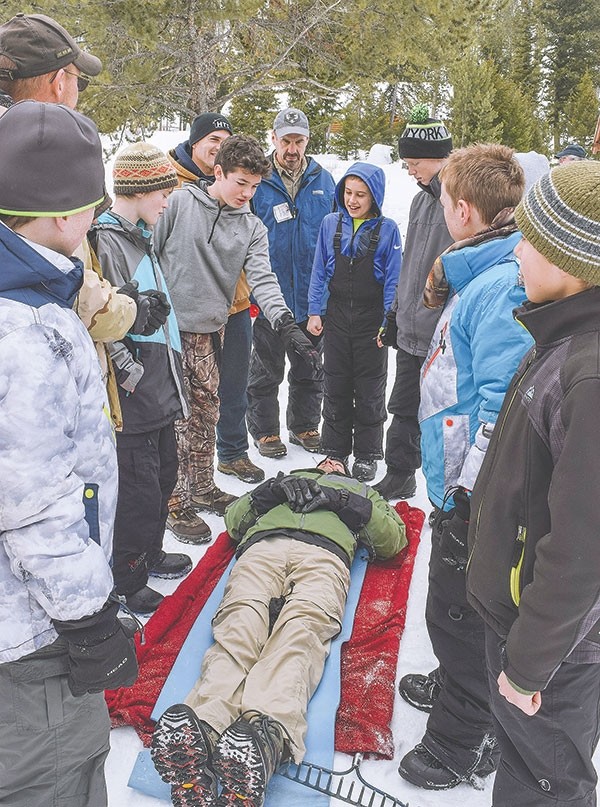 Boy Scouts from Lovell, Cody and Powell underwent winter survival and first aid training at Camp Buffalo Bill Saturday. A stretcher for the ‘victim’ must be fashioned PDQ from whatever material can be found, including blankets, a sleeping bag or, if handy, a rake.
Tribune photos by Gib Mathers 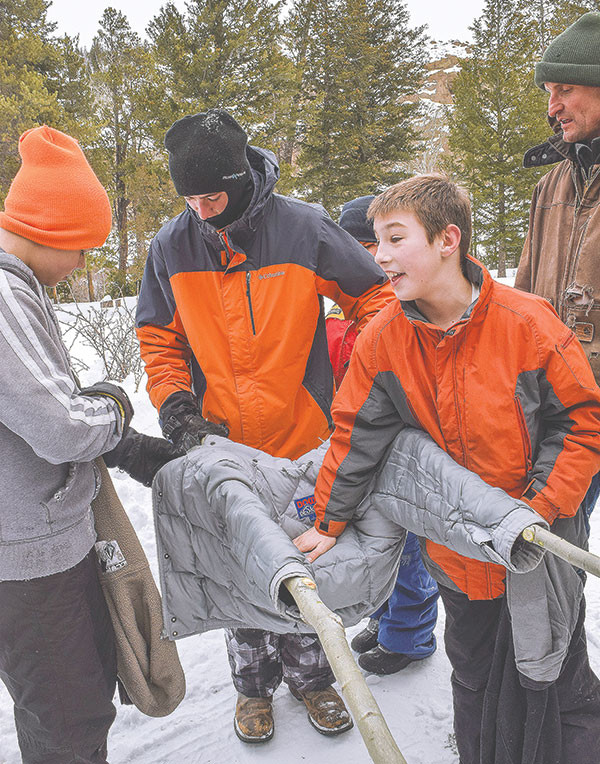 One lesson includes constructing a stout with materials at hand in a wilderness setting. With a little coaching from Scout leader and fireman Scott Shoopman, the boys devise a sturdy stretcher from coats and poles. From left are Jonathan Hurt, Sam Shoopman, Hyrum Jeide, and Scott Shoopman. In the background is David Polson. ‘It teaches leadership skills to those young men,’ Scott Shoopman said. 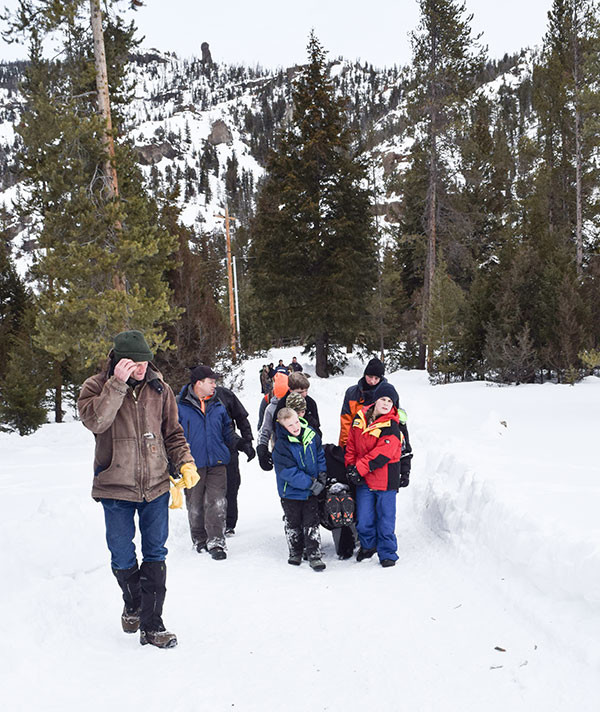 Boy Scouts and Scout leaders transport their ‘patient’ up to the lodge for additional ‘treatment’ on their makeshift stretcher. At left is Scout leader Scott Shoopman, followed by fellow leaders Colton Checketts and Brian Frame. Carrying the stretcher’s left side are Russell Checketts, Simon Shoopman, David Waite and Clayton Checketts, with David Polson, Hyrum Jeide, Sam Shoopman and Jonathan Hurt manning the right side. The patient is Scout leader Hayden Black.
Previous Next
Posted Thursday, January 26, 2017 3:41 pm
By Gib Mathers

Who better to rescue a winter accident victim than a troop of always-prepared Boy Scouts, provisioned amply with winter survival training?

On Saturday, some 65 scouts from Lovell, Cody and Powell (Troop 26) underwent training on how to persevere when temperatures plunge and snow is deep. At Camp Buffalo Bill, the boys learned to evacuate a victim of a backcountry injury using the materials at hand.

The winter practice went without a hitch. The boys picked up the basics of winter survival and first aid while engaging in snowball fights and a few bouts of king of the mountain on mounds of snow left by a backhoe.

The boys built a snow cave with two entrances, and a vent hole to expel carbon dioxide. Friday night, the youngsters covered the doorways with chunks of snow to sleep snugly, Morrow said.

Cave seems an apt description. Separate tunnels bored into a larger room where the boys slept. The roof, composed of lumpy snow like off-white sedimentary rock crammed together, kept the cold at bay; light streaming through the vent hole resembled a radiant beam from a flashlight.

Connor Strom lounged in the cave with a can of fruit salad, comfortable as a kid watching TV in his parents’ living room.

Tom Maffin, Boy Scout leader, got the boys started on evacuating patients from the snowy wilds.

The scouts must think outside the box, Maffin said. They must care for the victim while watching out for themselves.

One such contrivance incorporates a pair of old Rossignol skis. A wood frame is attached and a lawn chair is bolted to the frame. The juvenile “victim” — looking downright buoyant for a victim — has his left leg wrapped in a cast from a foam sleeping pad.

“And there you got yourself a Klondike sled,” Morrow said.

What’s next is what Morrow calls a Klondike derby.

That’s fitting, but rather than the customary dogs one might find pulling sleds on the Yukon River, the boys are tasked with towing their patients.

A turnaround lane cut through the snow serves as the youth’s Iditarod — a horseshoe-shaped course of a few hundred yards with a downhill grade.

Off they go, hauling their victims, who are suffering a variety of injuries and swathed like infants, bundled against the cold in a baby carriage.

The sleds slide through the snow surprisingly well. It’s difficult to discern who is having more fun — the victims or their two-legged sled dogs.

They were also taught how to reach an individual buried in an avalanche by honing in on the victim’s snow beacon, Morrow said.

A sled might be appropriate in some snow scenarios, but conditions may mandate an alternative evacuation plan, such as a stretcher; once again, it must be fashioned from the boys’ equipment they would customarily pack on a winter outing, combined with materials provided by nature.

Stretchers varied from poles wrapped with a tarp to one constructed with coats and a couple poles.

Scott Shoopman, a Powell firefighter, and his team used a couple short aspen trees minus limbs. Three coats were slid on to the aspen through the coats’ arms. The first coat supported the patient’s head and shoulders, the second his buttocks and lower back and the third, his legs. Spaces between coats on the aspen allowed the rescuers a firm grip during transport.

Maffin reminded the boys to take frequent breaks, rotate positions on the stretcher and ensure the patient’s head was supported at all times.

Also on the training schedule was learning to load a patient aboard a helicopter. That included stomping out an LZ — landing zone — in the snow large enough for the helicopter to safely touch down.

Learning to detect signs of hypothermia was another lesson, Maffin said.

Before lunch, the Scouts earned a free period. In no time a snowball fight ensued, with the boys firing the icy missiles with the joyful abandon only pre-teenagers are capable of.

King-of-the-hill skirmishes materialized atop the snow cave and other mounds of snow that stood like power-packed Matterhorns.

Soon lunch fires were blazing here and there like an army bivouac in an old Western movie. Kindling crackled soothingly in one outdoor hearth, sending a column of gray-white smoke into the blue sky.

Other boys and adults wandered in and out of the lodge to dry gloves in the stone fireplace or grab a cup of hot chocolate or coffee from steaming urns.

KinCaid Dickson, 12, of Lovell, sipped hot chocolate from a Styrofoam cup. One crucial lesson he (and early morning coffee drinkers the world over) learned: add just a little cold water to hot cocoa to expedite drinking the tasty but piping-hot blend.

Dickson also learned to build stretchers and snow caves, he said as steam from the cocoa warmed his cold-reddened cheeks.

“I learned about hypothermia and the symptoms,” Dickson said.

If the youth enjoy themselves, they will retain their lessons, Morrow said.

“It was really fun,” Dickson said.