For the 20th consecutive year, wolf populations in Wyoming have exceeded the delisting criteria of the Endangered Species Act, according to a newly released report by the state’s Game and Fish … 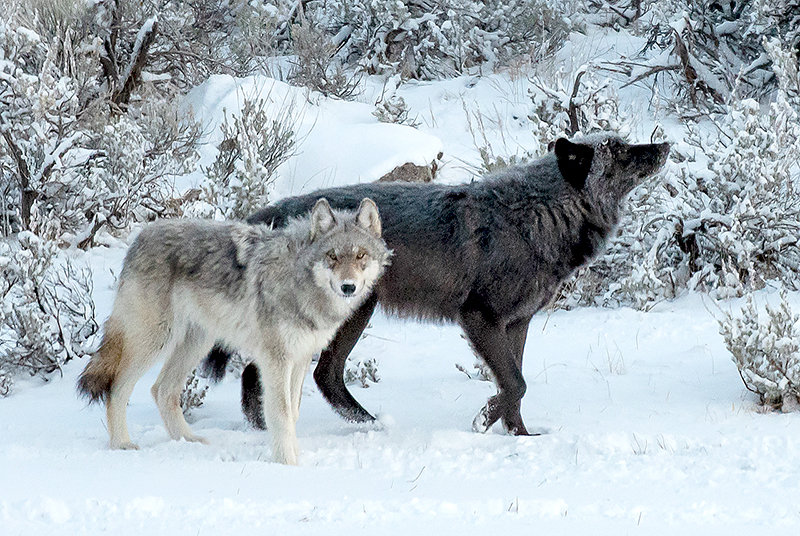 Two wolves in the northern part of Yellowstone National Park move through the Lamar Valley earlier this year. A major draw at the tourist destination, wolves can be hunted if they step beyond the boundaries of the park.
Tribune photo by Mark Davis
Posted Thursday, May 12, 2022 8:20 am
By Mark Davis

For the 20th consecutive year, wolf populations in Wyoming have exceeded the delisting criteria of the Endangered Species Act, according to a newly released report by the state’s Game and Fish Department. At the same time, many in the region are calling for the species to be relisted.

The department has managed the species in the state since it was delisted in 2017. Game and Fish also reports the fulfillment of the five-year post-delisting monitoring period required for species recovered and delisted under the act. At least 314 wolves in about 40 packs, including about 23 breeding pairs, inhabited Wyoming statewide at the end of the year. This includes about 95 wolves in Yellowstone National Park.

As of December 2021, there were at least 95 wolves in the park in eight separate packs. The count marks a decrease of 23% from 2020 but is close to the previous decade’s average end-of-year count, according to officials at the park.

Beginning in 1995, the U.S. Fish and Wildlife Service reintroduced 41 gray wolves (wolves) in Yellowstone as an experimental population under the Endangered Species Act with the goal of reestablishing a recovered gray wolf population in the northern Rocky Mountains.

The U.S. Fish and Wildlife Service was the federal agency charged with administering, monitoring and managing the wolf population following reintroduction until wolves reached recovery levels and Endangered Species Act protections could be removed. The wolf population expanded quickly in number and distribution throughout northwest Wyoming and met the required recovery criteria by late 2002. The species has exceeded the recovery criteria every year since, despite their eventual delisting and the start of hunting seasons in the state, Game and Fish reports.

After delisting the species in 2017, Wyoming offered hunts in the Wolf Trophy Game Management Area. Outside the trophy zone, the Wind River Reservation and the national park wolves are considered predatory animals and can be killed without a license.

“Wyoming has a proven track record of successfully managing a fully-recovered gray wolf, and we will continue that approach into the future,” said Game and Fish Director Brian Nesvik.

A total of 107 wolf mortalities was documented statewide in 2021: 62 in the trophy zone, 38 in areas where wolves are designated as predatory animals, six in Yellowstone National Park, and 1 in the Wind River Reservation. Humans were responsible for 90 of the deaths (84% of the mortality), 14 died normally, and three deaths were from unknown causes. The department also captured and radio-collared 56 wolves for monitoring and research last year.

Thirty-two wolves were legally removed by agencies or by landowners attempting to reduce livestock losses to wolves, including 17 in the trophy zone and 15 outside the area. Wolves were confirmed to have killed or injured 109 head of livestock, including 50 cattle, 53 sheep, five livestock guarding dogs, and one horse statewide in 2021.

Wolf/livestock conflicts in the trophy zone were the lowest recorded since 2010, while conflicts in the seasonal trophy game management area and year-round predatory animal area increased, the department reported.

Hunting in Idaho and Montana attracted headlines after the two states made it legal to kill the majority of wolves in the states. Idaho recently placed bounties on the heads of wolves within its borders. After adopting legislation that allows hunters to slaughter 90% of the state’s wolves in this fall’s hunt, the Idaho Fish and Game Department announced it will pay hunters up to $2,500 for each wolf they kill.

“It’s clear that our neighbors in Idaho are taking ever more extreme steps to drive the species to extinction,” said Jeff Ewelt, executive director of Zoo Montana.

Ewelt is one of many individuals and organizations condemning the practice. “I worry that Montana will follow in Idaho’s footsteps,” he said in November.

This year’s Montana hunt can harvest up to 85% of the states’ wolf population, allowing hunters to put out bait to lure wolves. “For just $13.80 per head, a Montana hunter can shoot up to 10 wolves,” Ewelt pointed out.

Doug Smith, project leader for the Wolf Restoration Project in Yellowstone, claims wolf hunting just over the borders of the park is changing the behavior of wolves in the region and is harming research done by park wildlife biologists.

This year, after at least 25 wolves were shot or trapped just beyond the park’s boundaries, Yellowstone Wolf Project personnel have observed pack hierarchies being disrupted by the record-setting killings and some wolves have abandoned their selective-mating customs, Smith said in an interview with Wyofile late last month.

“[Hunts on park boundaries] have broken apart the social structure, it’s messed with the hierarchy, and it’s actually produced more pups,” Smith said. “Now this is a hypothesis, but this is what I would call an artificial stimulation of wolf reproductive capacity. By going in and killing them, you stimulate reproduction.”

Smith, who has been with the park’s wolf program since its inception, has studied wolves for over 20 years. Prior to Yellowstone, he worked with wolves in Michigan and Minnesota. Smith told the nonprofit publication it will take three to five years for Yellowstone’s wolf population to revert to a more natural condition following the 2021-22 state-managed hunts, but only if Montana changes rules that allow wolf hunters to aggressively pursue the “naive, human-conditioned canines without limit just outside the protected park.”

Many have questioned Smith’s hypothesis. “I conclude that it’s purely politics, driven by Yellowstone National Park officials’ desire to create public pressure to change wolf-hunting policies of state wildlife agencies in neighboring states,” wrote Cat Urbigkit, a rancher and author from Big Piney, in a response to Smith’s statements.

Yet others are calling for the species to be relisted. A new billboard in Cody sponsored by the nonprofit conservation organization Wyoming Untrapped and directed at tourists heading to Yellowstone, is proposing to relist wolves, “before it’s too late.”

Not only is the species in danger, they contend, but so is the increasingly important tourism sector. “For an industry that relies on close encounters, these changes [in hunting regulations] could be devastating,” said Loren Taylor, wildlife biologist and executive director of Wyoming Untrapped.

Conservation organizations submitted two petitions for relisting the Northern Rockies distinct population species last year. In response, the Fish and Wildlife Service issued a 90-page finding stating the petitions provided substantial information that warranted a 12-month review to determine if relisting should be recommended. Wyoming Untrapped then submitted a petition for emergency relisting along with their partners on March 1.

In the meantime, the group is suggesting those interested in protecting the species participate in public comment periods.

“Currently the Chapter 47 gray wolf hunting season regulations are open for public comment and anyone interested in this issue should consider speaking up,” Taylor said.

The commission has proposed to amend the Wyoming Game and Fish Commission seasons regulations including licensing limitations, harvest registration procedures and bag limits for the 2022 hunting season and is hosting a public meeting to discuss the proposed changes to mountain lion and gray wolf hunting seasons Tuesday, May 17 at 6 p.m. at the Park County Library in Cody.

The current mortality limit for the gray wolf hunting season this fall and winter is 47 divided between 14 hunt areas. The season begins September 15 and runs through the end of the year, except in Hunt Area 12, where the season begins Oct. 15. Wolves in the remaining portion of the state (approximately 85%) are designated as predators. In the predator zone, there is no limit on the number of wolves that can be killed.