A slow start to the season saw the Trapper women’s basketball team winless heading into a recent three-game road trip through Montana. Northwest began to find their footing coming out of the … 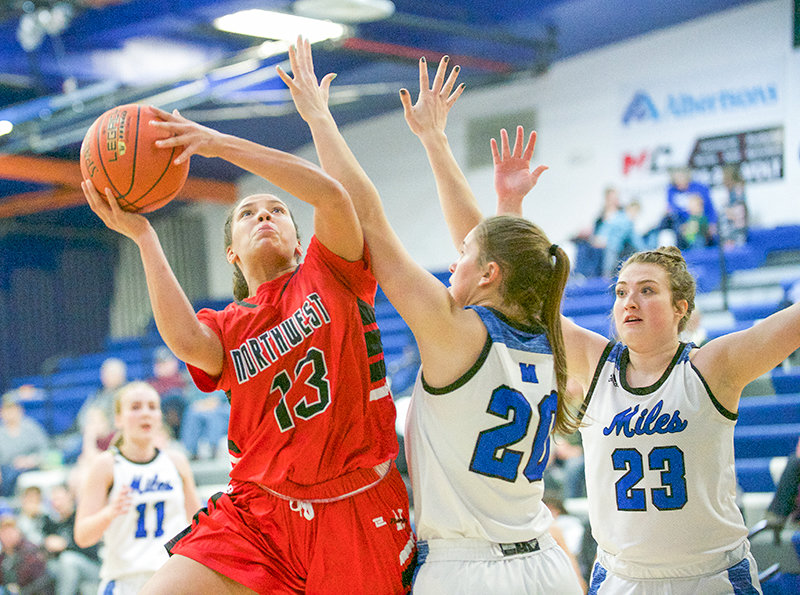 NWC sophomore Kierra Cutright muscles her way in for a layup against Miles CC on Nov. 18. Cutright and the Trappers are beginning to find their groove as they head to North Dakota this weekend.
Tribune photo by Seth Romsa 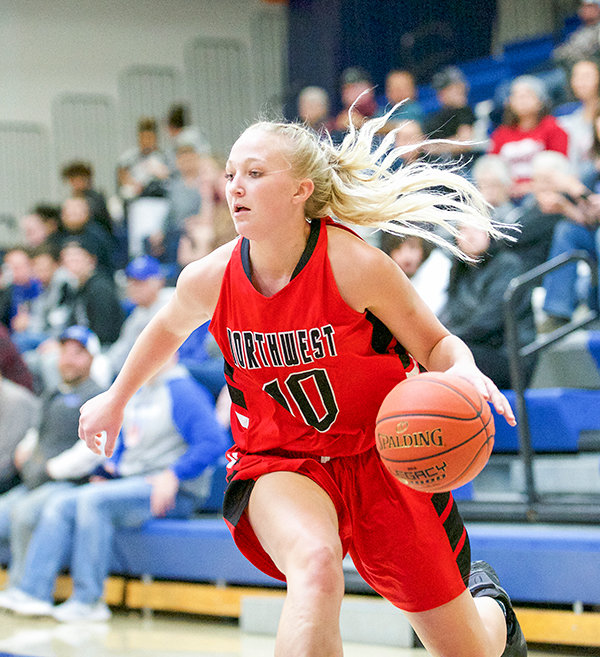 NWC freshman Brenna Rouane drives baseline during the Trappers matchup against Miles CC. The Trappers found their groove in the second quarter en route to a 23 point victory and a 2-1 road trip in Montana.
Tribune photo by Seth Romsa
Previous Next
Posted Friday, November 26, 2021 8:05 am
By Seth Romsa

A slow start to the season saw the Trapper women’s basketball team winless heading into a recent three-game road trip through Montana. Northwest began to find their footing coming out of the road trip with a 2-1 record, defeating Rocky Mountain JV and Miles City while dropping a close contest to Dawson Community College.

Coming off of their first victory on Nov. 16, against the Rocky Mountain JV, the Trappers (2-5) looked to start a winning streak against Dawson (6-3).

Early on, the teams battled back and forth. The Buccaneers grabbed a six-point advantage before a layup by NWC’s Kiana Quintero brought the Trappers within four, 19-15, to end the first quarter.

Dawson started the second quarter off strong, building a 24-17 lead before a 3-pointer from Trapper Nayeli Acosta made it 24-20.

The contest continued to be a game of small runs, as the Trappers again finished the quarter with a layup — this time by Darla Hernandez — to make the score 34-30 heading into halftime.

The Buccaneers started the second half on a 13-5 run to build a 12-point lead with just under five minutes left in the third quarter. However, a 3-pointer by Acosta sparked the Trappers to a 13-3 run the rest of the quarter as NWC pulled within 50-48 heading into the fourth quarter.

Scoring was scarce early on in the final period. A 3-pointer by Brenna Rouane gave the Trappers a 55-52 lead with 5:48 remaining — their first lead since going up 6-5 midway through the first quarter.

The two teams exchanged baskets with the Trappers taking their final lead — at 62-61 with 2:17 left — on a Tatiana Coleman free throw. However, the Buccaneers  started to take over in the free throw game, making 7-of-8 attempts to win the game 70-64.

“We were up and then we just kind of panicked and made some silly fouls,” Trapper head coach Lauren Davis said, adding, “We just did not play four quarters of basketball.”

Turnovers again plagued the Trappers as they finished with 24 compared to Dawson’s 12.

Cutright finished with a 17-point and 10-rebound double-double, and was the only Trapper in double figure scoring. Annie Mitzel led Northwest off the bench with nine assists.

Heading into the final game on their road trip, the Trappers knew they needed to respond and defeat Miles Community College (1-7) to build some momentum.

“Going into Miles it was a must-win,” Davis said. “Our mindset seemed a little bit different and I think we played four solid quarters of basketball.”

Scoring was few and far between early, as both teams struggled to find the basket after their first possessions. It was 3-2 with 4:49 remaining in the first quarter.

From that point forward, the Trappers ramped up the pressure on Miles, forcing the Pioneers into bad passes and creating transition opportunities.

A jumper by Shante Falslev gave the Trappers a 15-10 lead at the end of the first quarter.

“I am trying to teach them to be super aggressive, getting over screens and being in your face,” Davis said. “For them to try and control their bodies a bit and not foul is something we need to work on, because we get in foul trouble a lot.”

Meanwhile, NWC’s offense found success in the second period. Davis said the offense has started to flow better through Acosta, which has allowed the team to find more shots as the season has progressed.

“I think she is kind of building her leadership role a little bit and finding herself as a player,” Davis said.

The Trappers outscored Miles 19-8 in the second period, taking a 34-18 advantage into halftime.

Quick baskets by Celina Tress and Hernandez made it a 20-point advantage in the first minute of the third quarter.

Miles battled back, going on an 11-1 run, but the team’s leading scorer, Gabby Fluteplayer, picked up her second technical foul of the contest and was ejected with seven minutes remaining in the third. Meanwhile, a Cutright layup and Acosta transition 3-pointer built the NWC advantage back to 15.

The Trappers kept their momentum and finished the third with a 53-37 lead.

Acosta finished with 21 points on 6-of-12 shooting from 3-point range, along with eight rebounds and seven assists.

Hernandez joined her as the only other double digit scorer and seven rebounds. Hernandez finished just behind Cutright who finished with 10 rebounds before she fouled out in the fourth.

The month-long road trip does not stop for the Trapper women, as they headed north this week to take part in the Williston State Invitational in Williston, North Dakota.