A transfer station will serve as a temporary holding facility for the trash until it’s transported to the landfill. City garbage trucks will dump their loads into a sealed trailer inside the enclosed transfer station, and when it’s full, … 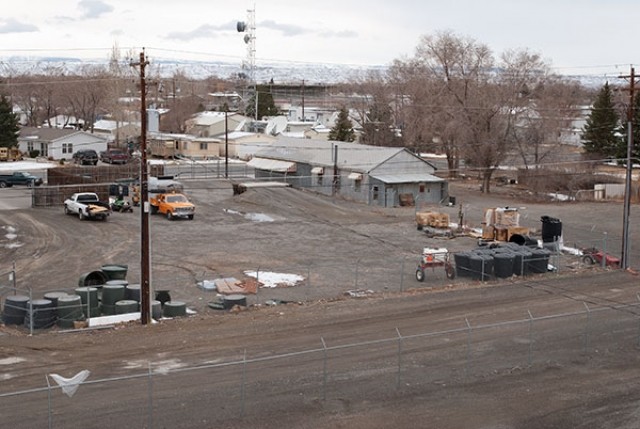 The city is planning to build an enclosed transfer station for garbage on this industrial-zoned property on North Ingalls Street. The land is adjacent to the City Sanitation Department. The old building pictured at right will be torn down. Under the city’s plan, garbage trucks will enter the transfer station from the alley and dump loads into a compaction trailer. When that trailer is full, a truck will exit onto Ingalls Street and haul it to the Cody landfill. The city will contract with a private company to haul the trailer to Cody. Sanitation department employees will operate the transfer station, and the city will not need to hire additional employees, leaders said during an informational meeting Monday.
Tribune photo by Kevin Kinzley
Posted Thursday, March 22, 2012 3:21 pm
By Tessa Baker

City leaders are moving forward with plans to build a garbage transfer station near the existing sanitation department on North Ingalls Street. But neighboring residents opposed the site during an informational meeting Monday night, saying a transfer station will decrease their property values and is unwanted in the neighborhood.

The county-owned Powell landfill is slated to close to household waste in September, after which trash will need to be trucked to the  Park County Regional Landfill in Cody.

A transfer station will serve as a temporary holding facility for the trash until it’s transported to the landfill. City garbage trucks will dump their loads into a sealed trailer inside the enclosed transfer station, and when it’s full, the bin will transport trash to the Cody landfill — its final destination.

City leaders say a transfer station will save money for local residents by reducing the number of trips to the Park County landfill. They estimate the transfer station will mean making one trailer haul to Cody a day instead of three daily trips with city sanitation trucks that aren’t designed for highway travel.

“Sanitation as we know it currently is going away,” Butts said. “What was in the past is no longer going to be able to be accomplished in the future. You can’t just take your municipal solid waste and haul it in the trucks to the landfill here in Powell. The landfill is going away.”

Anticipating that closure, city leaders have said for years that a transfer station is the best way to efficiently take care of municipal solid waste while keeping rates down as much as possible for city residents.

The State Loan and Investment Board has awarded $752,502 in grants toward the roughly $1.43 million transfer station project.

‘Not in our front yard’

Last month, nearly 250 county residents opposed the city’s original plans to build the transfer station near the intersection of Lane 9 and Road 7. Citing potential detriment to neighbors and other factors, three county commissioners voted against rezoning the city-owned property to allow for a transfer station, thwarting the city’s plans for the site.

The Ingalls Street property is zoned for industrial use, allowing for a transfer station.

On Monday, neighboring residents asked the city not to build a transfer station near their properties. The discussion was heated at times, with city officials and residents talking over each other.

About 10 residents spoke in opposition to the plan Monday night. They also presented a petition containing 237 signatures with Powell addresses. Butts said the petition contained more signatures, but they lacked an address or phone number. He added that none of the signatures had been verified as of Wednesday afternoon.

The 8,000-square-foot transfer station will be completely enclosed and clean, said Steve Moldt, president of Inberg-Miller Engineers, a company hired for engineering services at the site.

“This is as clean an operation as you can get,” he said.

City leaders say the use of the site isn’t changing much.

“The city is very sensitive to what this is going to look like, what’s it going to do for the area around it. The sanitation department is already there. You already have sanitation trucks going in and out of there. That’s not going to change,” Butts said. “The building itself will.”

He said the building and landscaping will be an improvement at the site. The area will have trees, fencing and security cameras. The transfer station will not be open to the public. Trash will be stored at the site temporarily, usually for less than 24 hours. In rare cases, it may be there from a Saturday to a Monday morning.

Powell’s proposed transfer station is based on a similar facility in Glenrock. During Monday’s meeting, the manager of the Glenrock transfer station, Dave Andrews, said via speaker phone that the facility is clean, ventilated to allow airflow and does not give off a strong odor.

“They’re not as bad as a green Dumpster in the summertime,” he said.

He also said the insect population can be controlled.

“You can swing through the building with the same machine that you use to spray for mosquitos, that same product will take care of flies,” he said.

Rodents are not a problem at the Glenrock transfer station, he added.

“I always hear about rodents. Unless rodents are willing to band together and build ladders and ramps and learn how to operate electric hydraulic controls, they’re not going to be able to get in,” Butts said.

County Commissioner Dave Burke said Monday night that he toured Glenrock’s transfer station and expected it to be dirty or smelly, but that was not the case. He said he was very impressed with the operation and commended the city for its transfer station design.

Neighboring residents said even if it’s a clean operation, they fear a transfer station will significantly decrease their property values.

“Property values are very subjective. Property values are based on what people think of what is in something. I don’t care if this is the most beautiful building in town with marble stone pillars in front. There’s garbage inside, and garbage has a stigma associated with it,” said Alta Davis, who owns Apple Academy preschool on North Ingalls.

“My cost is more than your cost, because my cost is that I’m losing property value also,” Davis said. “Everyone around it is going to lose property value, so you’re asking the neighbors of this particular area of town to take the biggest brunt of this.”

“We will do everything possible to make sure we do not harm the values of your land,” Butts said.

Davis questioned how the city will do that.

Councilman Don Hillman said a lot of thought went into the proposed site, and the city picked an area zoned for industrial use.

Councilman Hillman asked Davis and Griffith whether they knew their properties were in an industrial-zoned area when they purchased them. Both women said yes.

Hillman then asked Griffith why the zoning wasn’t a concern when she bought her property.

“Because my husband owns a body shop,” Griffith said.

“Yes, we all need a transfer station, but not in our front yard. Nobody wants that,” Griffith said.

Residents asked the city to consider a different location in an undeveloped area, such as west of town near the Habitat for Humanity ReStore and new Powell Valley Recycling Center.

“We’ve looked at a lot of places,” Butts said.

He outlined several of those sites Monday night and said the city considered a total of eight locations in all.

Land at the old landfill site also was deemed unsuitable.

“When you weigh the pros and cons, it’s not there,” City Engineer Sean Christensen said.

“Each time we looked at something, we tried to find what was the best and most suitable place,” Butts said.

Some of the sites don’t have the appropriate infrastructure, including electricity or street access, he said. Other proposed sites aren’t owned by the city or weren’t zoned for industrial use.

The city bought two lots on Ingalls Street for $45,000 from Powell Valley Recycling in January. That acquisition increased city-owned land at the site to 60,000 square feet — or nearly 1.5 acres.

When the county stymied plans for the rural city-owned property, the city looked at the Ingalls Street location.

“We realized that this would be a very suitable location for having the transfer station.”

Butts said it’s the least expensive option for the city and least intrusive.

“Every time we go outside of the city, we will be fighting with whether or not it will get zoned for us, whether or not the neighbors will be happy with it,” Butts said. “If we’re dealing with the county, as well as the city, we could be dragging this on for 10-20 years.”

The city will proceed with its plans to build a transfer station near its sanitation department, said City Administrator Zane Logan.

“It is my understanding that staff is to move forward with this project at the current sanitation department location in the city. The mayor and council is not required to vote on the location,” Logan said in an email Tuesday.

The purpose of Monday night’s meeting was to inform Powell residents about the project, and it was required for the Wyoming Department of Environmental Quality permit process.

“There will continue to be information and more details about the new transfer station in the upcoming council meetings,” Logan said.

Mayor Scott Mangold encouraged neighboring residents to contact their councilmen with concerns, noting that their email addresses and phone numbers are available.

Mangold said the city has been fighting the garbage battle as long as he’s been mayor — seven and a half years.

“We’re trying to have as less (negative) impact on this community as possible, but garbage is changing that,” Mangold said.

City leaders have said the city’s cost increase would be $26/ton if hauling trash directly to Cody. With a transfer station, that goes down to about $13/ton, Butts said.

“They’re not anticipated to go up at this time,” Butts said. “Obviously, if the county raises its rates, then we’ll have to pass that along.”

“We’re trying to keep the utility bill down as much as possible,” Mangold said.