Each autumn, when the firefighting season came to an end, Tim Hart would return to Cody. As the cottonwoods yellowed and the elk descended from the high country, the smokejumper would head up the … 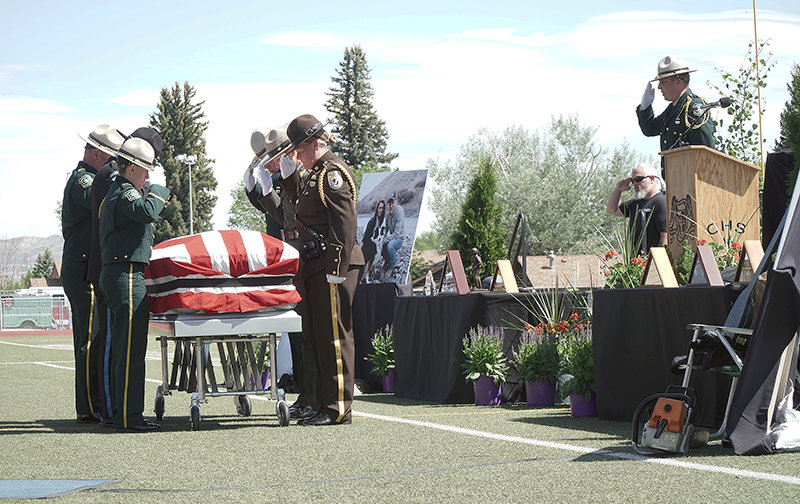 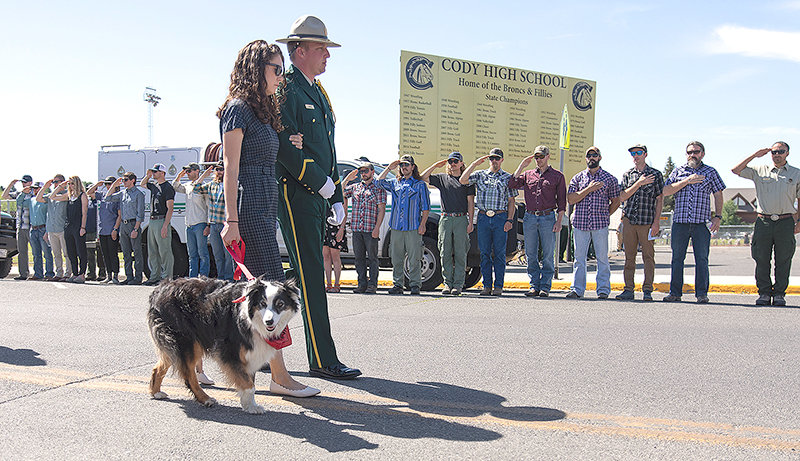 Michelle Hart, the wife of fallen smokejumper Tim Hart, holds the couple’s dog, Dash, while being escorted through a Cordon of Honor by the U.S. Forest Service Honor Guard Saturday morning in Cody. Firefighters lined Beck Avenue and stood at attention as Hart’s body was brought to Spike Vannoy Field for the memorial service.
Photo courtesy Megan Jolley
Previous Next
Posted Tuesday, June 15, 2021 8:20 am 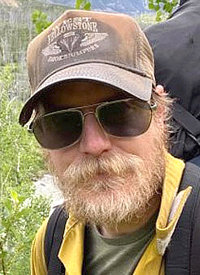 Each autumn, when the firefighting season came to an end, Tim Hart would return to Cody. As the cottonwoods yellowed and the elk descended from the high country, the smokejumper would head up the South Fork of the Shoshone River, recalled his friend, Ben Werner. In his younger years, Hart would simply sleep in his truck, accompanied only by a stuffed eagle he’d named Humphrey.

“For a period of time, that was all the home he needed,” Werner said.

But eventually, Hart’s love of the area was eclipsed by his love for a woman he’d met in Cody, Michelle Koch. When Hart returned last fall from battling wildfires in Yellowstone National Park and elsewhere, it was not to camp out under a pickup topper, but to rejoin the South Fork home he shared with Michelle. Hart planned a miniature forest out back, envisioning it as a place where his future children might play and discover their own passion “for soil and leaves and the sound of a breeze moving through overhead branches,” Werner said.

But Hart returned to Cody early this year.

While parachuting into the Eicks Fire in southern New Mexico, the 36-year-old made a hard landing and suffered fatal injuries. When he was flown back home on June 6, it was to be laid to rest.

On Saturday, more than 400 of Hart’s fellow firefighters, Forest Service personnel, state and local leaders and community members joined with his friends and family to give a final goodbye. On a Cody High School football field decorated with parachutes, dignitaries and an honor guard paid tribute to Hart’s sacrifice with bagpipes, the presentation of state and federal flags to his family and the ringing of a bell to signal the end of his watch.

“It’s amazing to me how this great world that God gave us — filled with wildlife, filled with trees, grasses that help support that wildlife — that there are those of us that appreciate it so deeply that we want to protect it at all costs,” said Gov. Mark Gordon. “Tim paid that ultimate cost.”

Hart’s mother, Pam, was among those who spoke Saturday. She said her son had many roles — as a child, as a brother, as a husband and as a friend — “but the role that truly defined Tim was that of wildland firefighter and smokejumper.”

“This was the role he loved best, because he worked so hard to achieve it,” Pam said.

Hart, who was originally from Zion, Illinois, chartered his course from college, studying forestry and natural resources and then obtaining a master’s degree in natural resources management and forestry. He started fighting wildland fires in 2006, when he joined Coconino National Forest in northern Arizona.

Hart went on to hold Forest Service and Bureau of Land Management firefighting jobs in Oregon, North Carolina and Nevada, along with serving with the Shoshone National Forest based in Cody. Then in 2016, he was accepted as a rookie smokejumper in Grangeville, Idaho.

Hart was among just a handful of rookies chosen for the program among a pool of some 300 applicants. Grangeville Smokejumper Base Manager Mike Blinn said Hart made it clear that he wasn’t planning on staying in Idaho for the long term, but that he would do his best while there.

“We decided to take the gamble there,” Blinn said, “and they don’t usually pay off that well.”

Hart proved to be fit, fast, gritty, funny, honest, kind, generous and always present in the moment. The new smokejumper was an immediate fit, and he and his fellow rookies “became a tight and formidable bunch,” Blinn said.

Hart was older than the other newbies, and one of his fellow rookie class members, Jace Washburn, said they figured he was an “old man.” Then Hart beat them running a mile-and-a-half and “did so many push-ups the trainers got annoyed and they just told him to stop, somewhere over 100,” Washburn recalled.

Hart didn’t care if people liked him, and he had both a swagger and a hard shell, Washburn said, but he also offered encouragement to his fellow rookie “bros.”

“He taught bros how to be better leaders, better technicians, better communicators and how to appreciate the spot you were in and all the work it took to get you there,” Washburn said.

It had taken Hart the better part of a decade to get into smokejumping.

“I remember he said if he didn’t get it our year, then he was going to get out of fire and go work at Home Depot,” Washburn recalled. “And I believed him.”

Washburn would later learn he’d fallen prey to Hart’s sense of humor, as Home Depot was never in his plans, only firefighting.

It was on Sept. 26, 2016 — nearly four long months after graduating from training — that Hart finally became a full-fledged smokejumper — diving into the Trail Fire on the Shasta Trinity National Forest in northern California. But he wouldn’t stay with the Grangeville team for too long.

“He was happy and healthy, and beloved at the base,” Blinn said, “but he was sleeping in the back of his truck, in a field, just to be able to do the job he loved.”

Hart had also started dating Michelle and felt he was “living the dream in two places.”

“He needed those two places to be closer together,” Blinn said.

In 2019, Hart was allowed to leave Idaho and join the smokejumper base in West Yellowstone, Montana.

The move put Hart closer to home and to the one he loved; he and Michelle married in the shadow of Carter Mountain in December 2019. The couple shared much, from everyday moments to outdoor adventures to their dog, Dash.

Beyond hiking, hunting and fishing, Hart enjoyed crosswords, trivia, darts, thrift store shopping and sharing homemade whiskey — all while faithfully rooting for his Chicago Cubs and Bears. Hart was also known for his love of Halloween, often readying three or four costumes each October.

“Everyone here has heard these stories as they have tumbled out of us over the last days and weeks. All those words and stories are true,” said friend and fellow wildland firefighter Matt Wanner. “And yet they do not encapsulate the full measure of the man he was.”

Wanner said he’ll miss the mundane times they shared, from Hart’s insistence on answering the phone with his full name to conservations on the back porch, with Cedar Mountain overhead and the night air “filled with a promise of life and dreams for the future.”

Those dreams were disrupted May 24, when Hart was summoned to the Eicks Fire, a 900-acre blaze that was burning in grass and brush in rugged, private land along the Continental Divide. Something went wrong during the jump and Hart took a hard landing; he died from his injuries on June 2.

According to records compiled by the National Smokejumper Association, the Cody resident was the 33rd smokejumper to die in the line of duty, out of more than 6,000 men and women who have served in the role since 1939. It was the first such death since 2013.

Pam Hart said her son’s death was not in vain, and not for nothing.

“He died doing a job that he truly loved to do,” she said, speaking with pride of her “true hero.”

Cody Mayor Matt Hall called Hart “a shining example of a life spent in service to others.”

“It’s a rare type of courage that empowers someone to jump out of an airplane and into a forest fire — a fearlessness that most of us will never know,” the mayor said.

The Forest Service and the country’s entire wildland fire community were “deeply shaken” by Hart’s loss, said Christiansen, who leads the agency.

“He lived and he worked on behalf of something greater than himself: his wife and his family, his friends, and his colleagues, his fellow Americans, the people we serve,” Christiansen said. “We can honor Tim best by letting him inspire us to be our best — by dedicating ourselves to something greater than ourselves, by giving of ourselves in service to others.”

Delivering Saturday’s final remembrance, Michelle Hart said thinking of her late husband “is like staring into the sun: painful and wonderfully bright.”

His death was not fair, she said, and he’s greatly missed.

“But we are and should be grateful to have known him for as long as we did,” Michelle said. “He was a gift that cannot be repaid.”

Michelle said the outpouring of support in the wake of her husband’s death — which included first responders escorting his body from Texas, where he was hospitalized, to Ballard Funeral Home in Cody — has lifted up his family members. To continue honoring Hart, she encouraged those in attendance to hold onto his memory and to live as he did.

“Enjoy silence. Embrace mystery. Be the first to action. Live at the tip of the spear,” she said. “Do not let anyone alter or quiet your voice.”

After the service wrapped up, the hundreds of firefighters dispersed from Cody, soon to be deployed to wildfires across the country. Washburn, Hart’s former rookie classmate, said they’ll carry their comrade’s sacrifice with them.

“We will hold him in our hearts and in our memories and in our stories throughout many fires to come,” said Washburn. “Tim made his mark in this world. There is no doubt.”