Rare red fox subspecies isolated in the Beartooth Range two ice ages ago is thriving, unlike others

In the drainages, plateaus and enclaves of the Beartooth Mountains, a relic of two ice ages ago is thriving despite being isolated for hundreds of thousands of years. The Rocky Mountain subspecies of …

Rare red fox subspecies isolated in the Beartooth Range two ice ages ago is thriving, unlike others 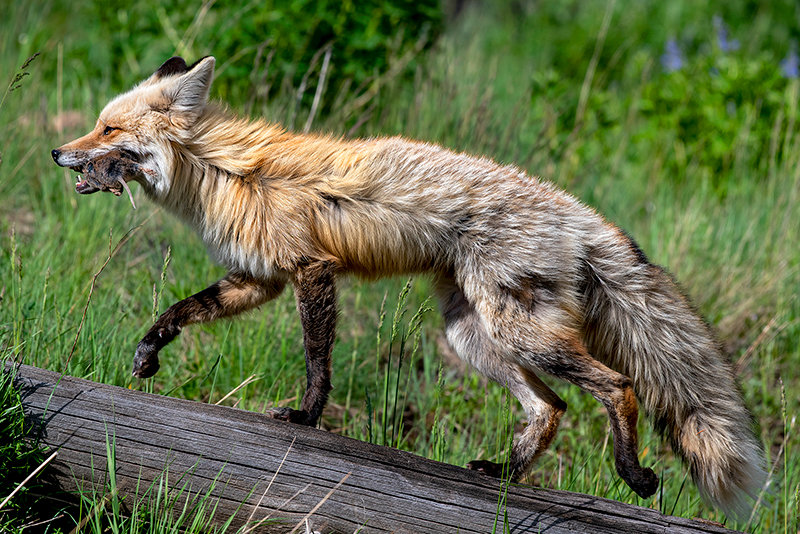 A Rocky Mountain red fox, a subspecies of the common predator found only in the Beartooth Mountains, carries a fresh rodent meal to a safe place to eat along the Beartooth Highway. The subspecies have a variation of coloration, larger paws and smaller ears than the typical red fox. There are 45 variations of red fox around the world, some that are endangered.
Tribune photo by Mark Davis 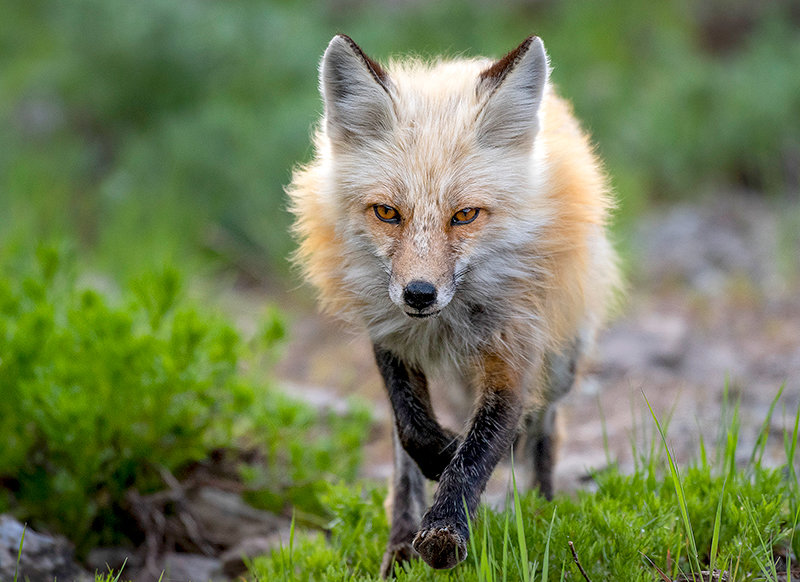 The Rocky Mountain subspecies of red fox is a leftover species from two ice ages ago and has evolved without interference from humans, unlike fur farm foxes.
Tribune photo by Mark Davis
Previous Next
Posted Thursday, September 29, 2022 8:25 am
By Mark Davis

In the drainages, plateaus and enclaves of the Beartooth Mountains, a relic of two ice ages ago is thriving despite being isolated for hundreds of thousands of years. The Rocky Mountain subspecies of the red fox is a success story in survival despite rarely receiving the benefits of conservation efforts.

Few even know how special the subspecies is in the fox community despite them being in the Beartooth Plateau for 200,000-500,000 years. The different-looking foxes ­­— which have a dramatically different, more earthy coloration, larger and hairier paws, and smaller ears than most people probably visualize when thinking of the species — can be seen hunting near roads, visiting campsites and even looking for treats at the bakery in Cooke City.

Although they are dramatically different in appearance from what most people think of as red fox characteristics, they are still the same species, said Patrick Cross, a wildlife biologist who spent 10 years studying the rare variation in the Beartooth Mountains.

He explained humans have selectively bred red foxes to make an “attractive scarf.” Whereas the Rocky Mountain subspecies of the red fox has been bred by nature to make an effective, adaptable, sustainable cog in the ecosystem.

A decade of research

Cross recently finished his decade of research trying to determine the need for future conservation practices. It didn’t take long for the study team to find evidence of their diversity. In the first winter of research they noticed something odd about the subspecies’ feces, or scat.

They were tracking the subspecies through the deep snow at high elevation to determine their levels of territoriality, when the team happened upon what appeared to be grizzly bear droppings. It “looked like tiny grizzly bear scat” because it was full of whitebark pine nuts, Cross said.

“We were collecting scat, sifting out the undigested bits and identifying the contents with a microscope to analyze their diet,” he said.

The contents were quite the surprise, he said while reminiscing about the early days of his research as a grad student at the University of Montana. Learning that an overlooked species was relying on the nuts, along with other species in the habitat, started a new chapter in the research.

Ounce for ounce, whitebark pine nuts have more calories than chocolate. This makes them an important food source in alpine environments. Due to the many issues facing the dwindling food source, the discovery became big news in the wildlife biology world.

Cross’ discovery has now been cited in professional papers, bringing a small amount of press to the subspecies, but nothing the average person typically follows.

One of the main reasons for the attention paid to the Rocky Mountain subspecies is that many native foxes across the west are in serious trouble. Other subspecies, like the tiny population of sub-alpine Sierra Nevada red fox that was thought to have died out in the 90s, was rediscovered in 2010. Or the endangered Cascade subspecies in Washington, which has seen its habitat contract significantly.

Threats to some of the 45 known subspecies of red fox around the globe include small population size, which translates into limited genetic diversity, potential impacts of climate change (including increased predation/competition by coyotes as a result of a decreasing snowpack), and the potential impacts of an invasion of non-native red foxes (bred for their pelts by man) into their current range, as well as hunting and trapping.

The largest threat to unique subspecies in the west is the presence of fur farm fox genes being carried to subspecies across the west, Cross said.

Fox fur farms used to be more common. There are currently about 50 fur farms spread out over 10 states in the U.S. producing about 1,500 pelts per year. Though not restricted in Wyoming, according to Game and Fish Department officials, there are no records indicating any exist in the state. There are fur farms in Montana, including fox, bobcat and mink farms.

Interest in fur farming has plummeted, along with the price of pelts, yet recent hybridization with non-native red foxes that were escapees from fur farms has added to other issues that has put the Sierra subspecies at-risk of going extinct, according to the U.S. Fish and Wildlife Service.

The Rocky Mountain subspecies is lucky to live in the Beartooth range, Cross said.

“Due to their vast habitat, largely untouched by man and flush with food sources, the Rocky Mountain subspecies is thriving.”

Yet, that doesn’t mean these odd-looking foxes shouldn’t be subjects considered for conservation efforts. But, it’s a huge challenge. Cross said “untangling” which foxes are native populations that should be conserved and which are hybrid non-native populations has been quite the effort. Both the native populations and fur farm foxes live in the same habitat and interbreed, he said.

“Wild animals aren’t selecting for an attractive scarf. They’re selecting an effective mate. But if it’s an isolated population, which doesn’t have many choices, then they will breed with the fur farm foxes,” he said.

Often demonized, Cross said trappers in the Beartooth range have had minimal effect on the subspecies, and have even helped in his research effort.

“I think we are fortunate that we have a robust habitat, and there aren’t enough trappers out there to cause an impact on the [Rocky Mountain] population,” Cross said.

For many fur-bearing species, trappers are seeing prices much below long-term averages, according to auction expert Serge Lariviére.

Trapping is long, hard work and few in it solely for the money have been active in the past 10-15 years.

At one time, trapping and hunting were about equal in participation. Low prices, due largely to fur shaming in past decades, has seen trappers rapidly dwindling in numbers.

Because the Rocky Mountain red foxes have a robust natural gene pool, they don’t necessarily need to breed with fur farm foxes. So there’s less opportunities for fur farm DNA to make its way into the local native population.

“It’s obviously not something to be taken for granted,” Cross said.

Across the country, scientists studying populations of foxes that set off on their own evolutionary course hundreds of thousands of years ago are collaborating their conservation efforts.

“The proud miracle of this whole thing is the fact that we’re all working together and working collaboratively,” Cross said. “We’re sharing not just our information, but our ideas.”