After being arrested in a stolen vehicle last week, Garrett Bailey told police a remarkable story, in which he was not the culprit, but the victim of a bizarre kidnapping.

In an interview with … 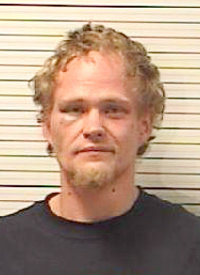 After being arrested in a stolen vehicle last week, Garrett Bailey told police a remarkable story, in which he was not the culprit, but the victim of a bizarre kidnapping.

In an interview with Powell Police Investigator Chris Wallace, Bailey explained that he’d been drinking a beer behind Blair’s Super Market on Feb. 23, when he was attacked by a man in a camouflage jacket and dark face mask. The next thing he knew, Bailey said, he woke up in the back seat of a Ford Edge, wearing only his long johns, while his assailant was speeding down the road. When the stolen SUV was stopped by police, Bailey said his assailant fled and escaped.

However, although Bailey was sporting a black eye, police found no evidence of the mysterious attacker and found Bailey’s clothes in the Ford. When Bailey learned surveillance footage had implicated him as the one who stole the Edge, he reportedly gave up.

“Bailey stated the vehicle was already running and he just decided to take it because he needed a ride to Cody,” Wallace wrote of the suspect’s revised account.

Meanwhile, the truck that brought Bailey to Park County belonged to a government agency in New Mexico, authorities say. Deputy Park County Attorney Jack Hatfield  indicated that Bailey took two other vehicles in the past two weeks, but he said those vehicles belonged to family members and it’s unclear whether any criminal conduct is being alleged.

“I believe he has destroyed one of them [the vehicles], he’s abandoned one of them here, and then took one of them on a high-speed chase — while he was under the influence of alcohol, marijuana and methamphetamine — of up to 122 mph on the condition of roads that … weren’t so great,” Hatfield alleged at a Friday court hearing for Bailey.

Hatfield has charged Bailey with three felony and three misdemeanor crimes for the recent events.

The prosecutor described the 27-year-old from Butte, Montana, as a “serious flight risk” and “an extreme danger to the community.” Hatfield requested that bail be set at $100,000, contending that Bailey “definitely needs to sit in jail until these charges are disposed.”

“I don’t necessarily agree, but I mean, I don’t have much to say,” he said. “I can’t really argue that much.”

Waters then set the suspect’s bail at $75,000 — a high sum for someone who reported having few assets.

Charging documents indicate Bailey arrived in Park County on Sunday, Feb. 21, with one significant asset: A 2004 Ford Ranger pickup worth $5,000. However, prosecutors say Bailey had stolen the truck from Harding County, New Mexico.

Bailey at one point claimed he’d been allowed to borrow the truck for a couple of days so he could visit his kids in Montana, but he later admitted he stole the Harding County-owned vehicle, Investigator Wallace wrote.

Bailey eventually got stuck in a snowdrift on Wyo. Highway 294 southwest of Ralston and abandoned the Ranger there, charging documents allege. That led to a felony count of disposing of stolen property.

Bailey then caught a ride to Cody and was provided with a room at the Legacy Inn, he told police. He reportedly got a ride to Powell the following day, Feb. 22, and a local church got him a room at the Super 8 Motel.

It was then on the evening of Tuesday, Feb. 23 that he went to Blair’s. When he didn’t find anyone willing to drive him to Cody, Bailey allegedly stole the 2015 Ford Edge from the lot, leaving behind a wallet and other items at the Super 8.

The vehicle’s owner — who had heard Bailey asking around for a ride — contacted police after coming out of the store and realizing the SUV was gone. Authorities spotted the stolen vehicle outside of Cody around 8:12 p.m.

A Park County Sheriff’s deputy and Wyoming Highway Patrol Trooper Randy Davis stopped the Ford near the intersection of Road 2DAW and Beacon Hill Road, but it soon sped off — nearly hitting another deputy who was attempting to block traffic.

“The vehicle was headed at me and almost collided with me head-on, but they swerved to avoid a collision at the last second,” Deputy Ethan Robinson wrote. That allegation formed the basis of a misdemeanor charge of reckless endangering.

Bailey headed south on Wyo. Highway 120, with Trooper Davis leading a pursuit. The chase hit speeds of up to 125 miles per hour; at one point, Davis wrote, the stolen Ford nearly collided with an oncoming UPS truck.

Bailey briefly shook the officers by turning onto the Oregon Basin Road (County Road 3EM). Trooper Davis slid off the road and got stuck in a ditch and snow while trying to make the turn, incurring at least $3,100 worth of damage to his patrol car, he said; that led prosecutors to charge Bailey with a count of felony property destruction.

Just minutes after ditching the officers, Bailey came flying back toward the highway from Oregon Basin. He made it back onto the highway, but only after running over spike strips deployed by Deputy Allen Cooper; those punctures forced Bailey to pull over.

Wearing only his long johns, Bailey got out of the passenger side of the Ford and claimed the driver had run away. However, he was unable to describe the supposed driver and officers determined he was the stolen Ford’s only occupant.

Bailey reportedly failed sobriety tests at the scene. A portable breath test pegged his blood alcohol content at 0.027% — well below the legal driving limit of 0.08% — but he later told police he’d used marijuana earlier in the day; Bailey reportedly claimed to have smoked a joint he’d found on a Colorado sidewalk.

“Bailey was not sure if the marijuana joint was laced with methamphetamine, but it tasted different,” Wallace wrote, adding that the suspect reported battling a meth addiction.

Those revelations led to a charge of driving under the influence of alcohol and a controlled substance. Referencing Bailey’s interview with police, prosecutor Hatfield asserted in court last week that “the state’s case is very strong against him, based on his own admissions.”

Judge Waters has tentatively scheduled a preliminary hearing in the case for Friday.