State may give bigger loan to Cody Labs

State may give bigger loan to Cody Labs 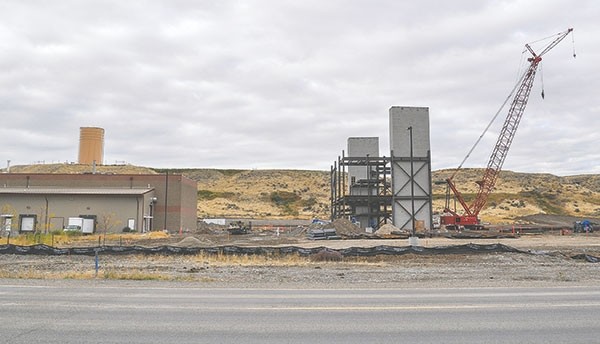 Cody Labs has started construction on a new production facility, which will adjoin the company’s warehouse on Road 2AB outside Cody.
Tribune photo by Tessa Baker
Posted Tuesday, September 26, 2017 2:30 pm
By CJ Baker

Cody Laboratories, approved for an $11 million low-interest loan from the State of Wyoming last year, may be allowed to borrow $23 million instead.

After the company pledged to create more jobs — and explained that expanding its facilities would be pricier than first thought — the Wyoming Business Council recommended that the local pharmaceutical manufacturer receive an additional $12 million.

The loan will next be considered by Wyoming’s governor, secretary of state, treasurer, superintendent of public instruction and auditor, who collectively make up the State Loan and Investment Board.

A subsidiary of the Philadelphia-based Lannett Company, Cody Labs has already started building the new production facility on Cody’s northern edge. It will adjoin the company’s current warehouse, on Road 2AB, which was also built with state help.

Cody Labs officials originally thought the expansion would cost $45 million and create 39 new jobs. However, they now figure it will cost $50.5 million while creating 57 jobs.

At a Sept. 14 Wyoming Business Council Board of Directors meeting, Cody Labs President Bernhard Opitz said the changes stem from the company’s chemists and engineers coming up with some innovative ideas. Those changes, Opitz said, more than doubled the facility’s estimated production capacity — of materials like active pharmaceutical ingredients (APIs) — from 11 to 25 metric tons per year. (The company currently produces around 5 metric tons of product.) That increased tonnage has created a bigger vision for Cody Labs.

When company leaders initially applied for a state loan last year, they thought Lannett Company would be their only customer, Opitz said. But 25 tons is more than Cody Labs’ parent company plans to use each year, he said.

“So the big change behind the numbers you’ve discussed is that we will be a supplier of APIs to the general market in the U.S. and internationally,” Opitz said.

Cody Labs currently has around 126 employees.

Board members expressed nothing but support for the project and for Cody Labs. However, they voiced concern about putting too many of the state’s eggs in one basket.

“I think it’s a fantastic project. It adds jobs to the State of Wyoming; it’s what we’re looking for,” said board member Cactus Covello of Torrington. However, Covello added, “I’m a bit hesitant to go clear all the way to the $29 million because I think we have a responsibility to the citizens of Wyoming to look at some other projects as well.”

Agreed board member Kim DeVore of Sheridan, “We are mistaken if we believe that this is the only great project we’re going to get to look at.”

If Cody Labs received $29 million, the state would be left with slightly less than $14 million — and roughly 57 percent of Wyoming’s  Large Project Economic Development Fund would be tied up with the company, said Josh Keefe, the council’s economic development finance manager.

However, Keefe also noted with the industrial developments that preceded the large loan program, one project took up as much as 59 percent of the funding.

Thomas Johnson, the chief performance officer of the Business Council, also argued that, “While your portfolio doesn’t become diverse itself, the economy becomes much more diverse, because you’re expanding a company that’s not in the normal realm of the companies that you see in Wyoming.”

Cody Labs is one of only seven U.S. facilities licensed to import raw poppy straw, which is then turned into various painkilling medications. Lannett Company CEO Arthur Bedrosian told investors in August that the new state-of-the-art facility in Cody should produce APIs at a lower cost than the company’s competitors. Lannett generally produces generic drugs.

Business Council board members asked Opitz whether a $23 million loan would be enough money for the project to succeed; Opitz said he sincerely hoped it would.

“I’ve been living, working, fighting for six years that this expansion can happen in Cody — and I mean every element of that,” he said. “Lannett really appreciates what we can contribute to them, but we as citizens of Wyoming have to fulfill also certain expectations.”

“By moving the loan to the higher level, I feel very positive that we can continue,” Opitz said.

In September 2016, Cody Labs initially requested a $33.75 million loan and the Business Council recommended $9.86 million; Opitz expressed concern that it wasn’t enough money to convince Lannett to move forward with the expansion.

However, the State Loan and Investment Board later upped the loan to $11 million, and Lannett’s leaders approved the expansion project; in remarks to investors in February, Bedrosian praised the Cody community and the state for the “very generous opportunities” and business-friendly atmosphere.

“The support of that community has been overwhelming. Of course everybody wants pharma business in their backyard, but most people don’t want API manufacturers in their backyard,” Bedrosian said at a conference in August. “In Cody, Wyoming, they see the value of moving away from their economy, which is based on oil and gas, into the health care field. And they’ve been extremely helpful to us in that area.”

Legislators put $25 million into the fund in 2014 and added another $25 million this year.

At the Sept. 14 meeting, Business Council board member Mike Wandler of Gillette advocated for lending more money to the Cody Labs project.

“... I think that, if we can really hit some out of the park, we’ll probably get more funding, because that’s what the state needs — is some of these big, hit-it-out of the park deals,” Wandler said. “So I don’t want to get too hung up on the fact that we’re using up our funds.”

Thompson, the council’s CPO, guessed that the State of Wyoming’s return on a loan to Cody Labs would be “very significant” and greater than the state’s more established Business Ready Communities program.

“It’s not an incentive [from the state] that loses value,” he said. “In fact, you get it all back plus interest and then you get the economic impacts on top of that.”

The Business Council’s board based the loan amount on how much Cody Labs’ expansion is expected to increase Park County’s assessed value over the next four years. By 2020, the project should add around $6.9 million worth of direct and indirect value to the county, according to calculations made by the firm Applied Economics.

The Wyoming State Loan and Investment Board will consider Cody Labs’ loan request on Oct. 5.

Cody Laboratories’ parent company is starting to search for a new leader. Lannett Company announced Monday that current CEO Arthur Bedrosian will be stepping down once a successor is found.

Bedrosian, 71, became president of Lannett in 2002 and has served as the company’s CEO and as a board member since 2006.

“I believe the company is strong financially and operationally, and has excellent prospects for continued success,” Bedrosian said in a statement announcing his planned departure, adding that Lannett has “put in place multiple initiatives to further grow the company for years to come.”

Lannett officials have said that its subsidiary, Cody Labs, is expected to play a significant role in the company’s future growth; that includes an expansion of Cody Labs’ facilities now underway.

Lannett Company generally produces generic medication, but it is currently in the process of producing its first branded product, C-Topical. The Cocaine Hydrochloride Topical Solution is a local anesthetic designed for nose and throat doctors during surgical procedures. The product is produced at Cody Labs.

On Monday, in the same release announcing Bedrosian’s pending departure, Lannett announced that it had filed a New Drug Application with the U.S. Food and Drug Administration, one of the final steps in getting the product to market. Bedrosian says he counts the filing among the highlights of his tenure at Lannett.

During his time with the company, Lannett’s revenues have grown by a factor of 25 — climbing from $25 million in fiscal year 2002 to $637 million in the past year.

Company records show Bedrosian earned $1.08 million in compensation in fiscal year 2017, down from $2.61 million the year before.

Last week, Bedrosian prevailed in a tax dispute with the federal government.

Federal attorneys with the U.S. Department of Justice’s Tax Division alleged that Bedrosian had “willfully” failed to report one of his personal bank accounts in Switzerland to the Internal Revenue Service.

Bedrosian testified at a trial last month that he learned in the mid to late 1990s that he’d broken U.S. tax laws by failing to report his decades-old account at UBS; however, Bedrosian said his accountant at the time advised him to do nothing about it — that it was too late, and that his only option was for his estate to simply pay penalties on the money later.

However, after that accountant died, Bedrosian received different advice; in 2007, he filed a form disclosing a UBS account that held about $240,000, but did not tell the IRS about a second account containing about $2 million.

When the IRS learned that Bedrosian had failed to disclose the second, larger account, it and the U.S. Department of Justice demanded that the CEO pay a $1 million penalty for a willfull violation of the reporting requirements.

For his part, Bedrosian said he’d always thought all the money was in one account, that he didn’t know how much was in it (part of the money was technically a loan) and noted he’d been cooperative with the IRS throughout the process, among other arguments.

In a Wednesday ruling, U.S. District Court Judge Michael Baylson of the Eastern District of Pennsylvania found in favor of Bedrosian.

“[E]ven if he did know that he had a second account yet failed to disclose it on the [Report of Foreign Bank and Financial Accounts], there is no indication that he did so with the requisite voluntary or intentional state of mind; rather, all evidence points to an unintentional oversight or a negligent act,” Judge Baylson wrote.

Because he concluded that the violation of the rules was not willful, Baylson ordered the government to pay Bedrosian back the $9,757.89 he’d already paid toward the IRS penalty.