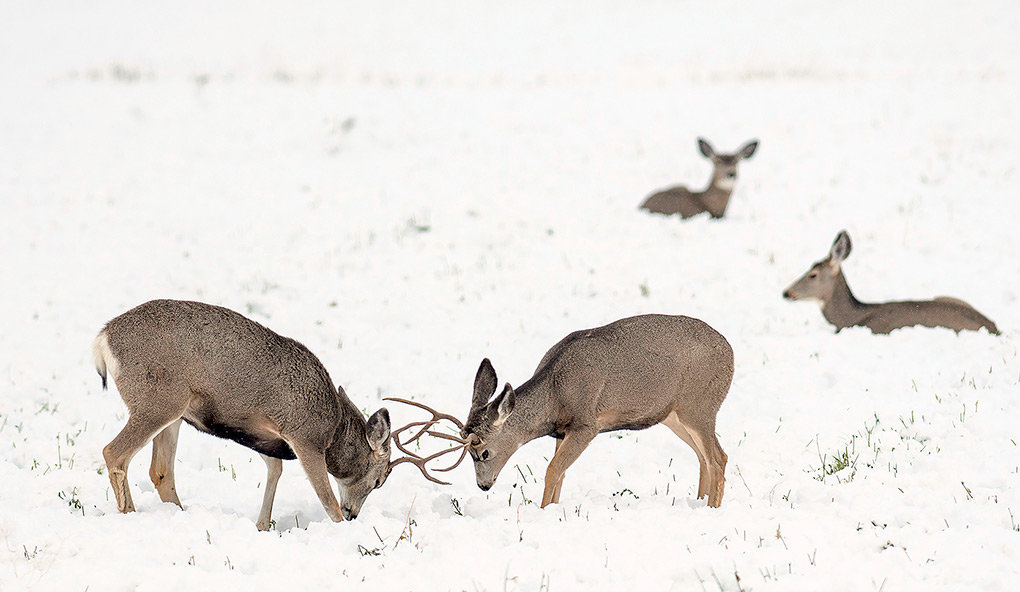 Young mule deer bucks spar while does seem oblivious to their displays on the North Fork near Wapiti. The Wyoming Game and Fish Department is concerned about low numbers in both the Upper Shoshone and Clark’s Fork herds, due partially to harsh winter weather for the past three years.
Tribune photo by Mark Davis 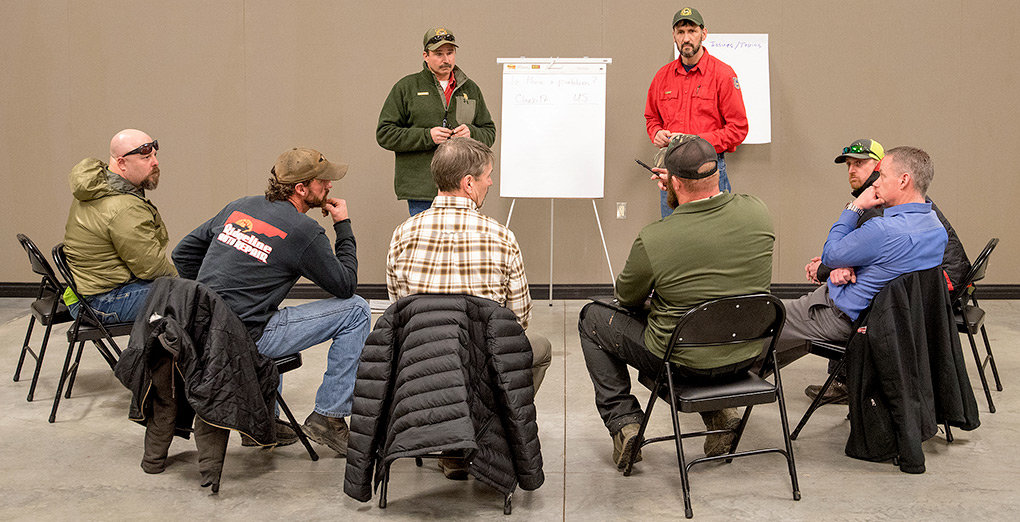 Mule deer population trends in the area are down, with no immediate hope of a rebound.

“From what our managers are seeing, from what we’re hearing from folks in the field and from our data, it suggests there is a problem,” said Corey Class, Cody Region wildlife coordinator for the Wyoming Game and Fish Department.

The Powell meeting was held Feb. 19, outside the regularly scheduled season-setting meetings.

“We felt that we were at the point that we needed to do something for these deer herds,” said Cody Region wildlife biologist Tony Mong.

As he laid out the data on recent decreases in the Upper Shoshone and Clark’s Fork herds, the stern look on the faces of those in attendance told the story.

A combination of concerns is the culprit. For the past few years, harsh winter weather — particularly hard on fawns — has been the largest factor in population declines, Mong said.

“It really comes down to fawns,” he said. “Are they making it or not?”

Based on fawn survival over the last three years, there is a reason for concern.

“We just don’t think there’s a lot coming up so we need to protect those deer,” Mong said.

He would like to see a study initiated to get better fawn mortality data. But until then, the exact effects of winter and other factors, like predation, on fawns is largely unknown, he said.

Wildlife biologists have used a benchmark of at least 66 fawns per 100 for a healthy herd. Those dipping below the mid 50s — such as the Upper Shoshone and Clark’s Fork herds — are struggling.

“The fawn ratio is the most variable and important component of mule deer management,” Mong said.

Post-hunt population estimates aren’t meeting Game and Fish objectives. Buck ratios are down as well. Currently there are about 20 bucks per 100 does. Not only is the ratio dropping, the number of class three mature bucks is in decline; antlers on class three bucks extend several inches wider than mule deer ears, typically 20 to 22 inches tip-to-tip, but up to 26 inches.

There’s no controlling Wyoming’s winter weather. So hunters and scientists looked to contributing factors where they can have an impact; disease and predators were the top concerns last week.

“There’s a congregation of carnivores on these migrating herds,” said Luke Ellsbury, large carnivore biologist with the Game and Fish, while speaking in his small group.

Many in attendance felt the number of non-resident tags should be reduced. Others were keenly aware of how reducing out-of-state hunters would affect the local economy.

“They’re a cog in the sprocket that makes this economy go ‘round, whether people want to admit it or not,” he said.

Rael also pointed out that shrinking herds are an issue throughout the state and deserving of the concern being given.

Despite data showing deer in both Upper Shoshone and Clark’s Fork herds are as much as 50 percent below objectives, an informal thumbs-up or -down poll of attendees showed very little support for shortening seasons.

The results of the Powell meeting — and from another one being held at the Park County Library in Cody tonight (Tuesday) at 5:30 p.m. — will be collected and taken into consideration when the Game and Fish makes final regulations for upcoming seasons.

Proposed changes will be out in March and discussed at the annual hunt regulation meeting.

He hopes to continue to collect field data and to look for new ways to study the herds through the year. Yet, collecting data is a tough, time consuming job.

Previous years’ counts were mostly done by air. Recent ground observations — including scout cameras and collars — have been used to track herds and estimate population sizes. The ground assault is slow, methodical work, but data from GPS collars helped crews pinpoint areas where trail cameras would be effective, Mong said.

The Wyoming Outdoorsmen and the Mule Deer Foundation offered to help the Game and Fish collect trail camera data. More than 12,000 frames were taken in the Upper Shoshone and were useful in herd logistics, buck ratios and age classes, Mong said.

Many frames were photos of the blowing blades of grass and took time to sort, with Mong ultimately classifying about 1,800 deer.