A Powell school bus driver and student were not injured when a bus slid off a slick road around 6:30 a.m. Tuesday. 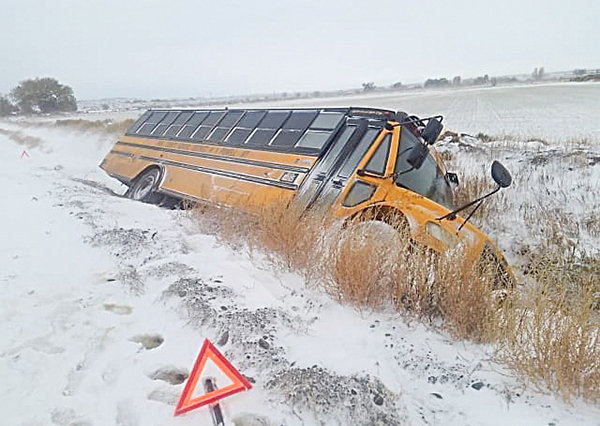 A Park County School District 1 bus lays on its side in a ravine after a big gust of wind and icy conditions pushed it off the road Tuesday.
Photo courtesy Park County Public Works Department
Posted Thursday, October 14, 2021 8:10 am

A Powell school bus driver and student were not injured when a bus slid off a slick road around 6:30 a.m. Tuesday.

The bus had just made its first stop and went around the corner on Road 8 and Lane 4.

It traveled about 300 yards down the road, bucking a few drifts, said Stephen Janes, transportation supervisor for Park County School District 1, then ‘a big wind gust came up [and] pushed the bus to the shoulder. The soft shoulder gave out and sucked the bus into the ravine.’ Two people on the bus — the driver and one student — were OK, Janes said. ‘We were able to get the bus pulled out a little later in the day,’ he said.

The bus has some damage to the driver’s side, Janes said, ‘but should be back on the road soon.’