The Powell High School gym rumbled with robots this month as students from across the state engaged in some friendly competition. The Robo Rumble was a scrimmage that brought out students from … 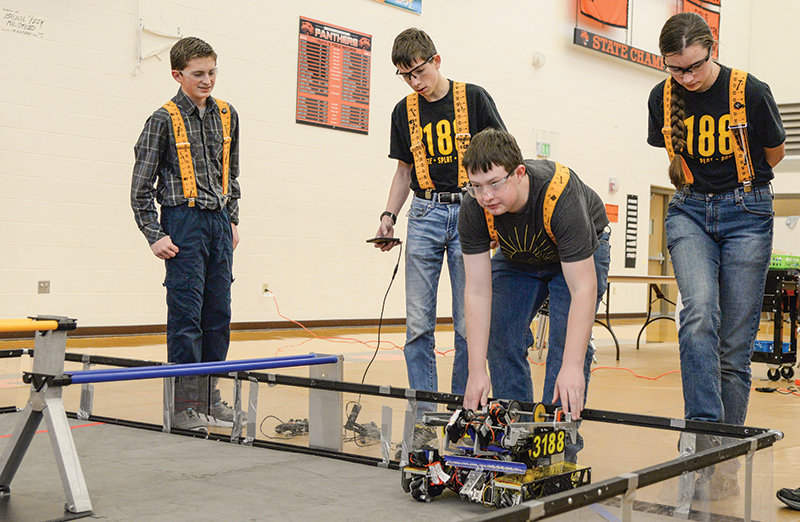 Owen Fink, Daniel Merritt, Cade Sherman, and Jenna Merritt, members of team Squiggle Splat Bang, try out a robot on a test field prior to the competition at the Robo Rumble on Jan. 11.
Tribune photo by Kevin Killough 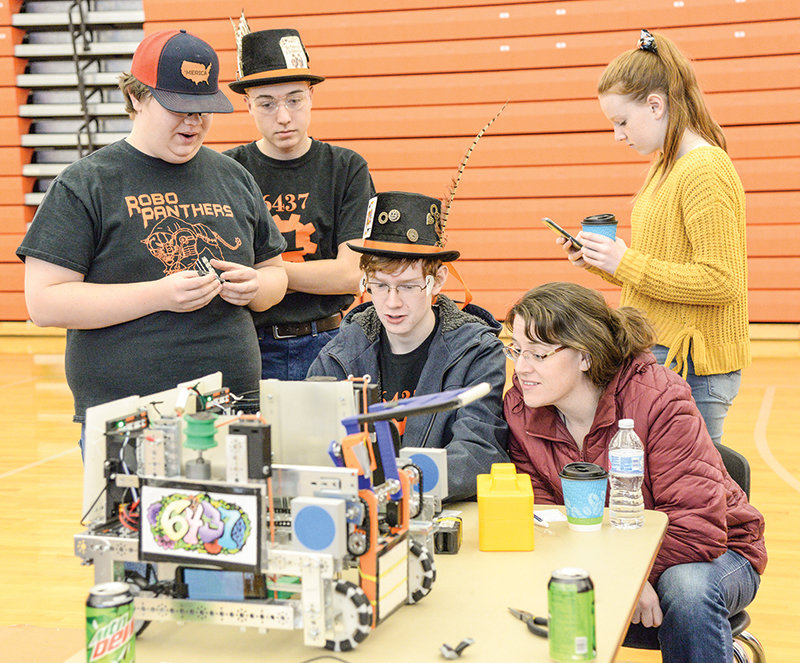 Nate Belmont of the Robo Panthers, works with Ethan Petrie and Gus Miller on the Mad Hatter team’s robot, while Gus’s mom Julie Miller looks on. Pictured in the background is Kate Miller.
Tribune photo by Kevin Killough
Previous Next
Posted Thursday, January 23, 2020 8:15 am
By Kevin Killough

The Powell High School gym rumbled with robots this month as students from across the state engaged in some friendly competition. The Robo Rumble was a scrimmage that brought out students from Montana and Wyoming. The event functioned as more of a learning experience than a competition, with experienced students helping those with clubs that are just getting off the ground.

The students were getting good practice for the FIRST Tech Challenge championship tournaments. The Montana tournament was held on Friday in Bozeman, and the Wyoming tournament is in Casper in February.

Schools are seeing their robotics programs ramp up, in part, because of statutory changes the Wyoming Legislature implemented in the 2018 session. The law allowed school boards to approve graduate requirements that permit students to count one year of computer science courses toward their math and science graduation requirements.

Robotics “is one way to get kids interested in computer science,” Hayano said.

The kids form up in teams, sometimes more than one to a school. In the scrimmage, they program robots to coordinate activities of moving items around the field, running on programs students write.

Jenna Merritt, a junior at PHS, competed in the scrimmage on the Squiggle Splat Bang team. This will be her third year competing in the FIRST Tech Challenge. Her older brother competed in robotics teams in middle school and high school, which “kind of inspired me to do the same,” Merritt said.

The team, one of four at PHS, lathed and milled some of the parts for their robot, and some were designed on CAD at the Powell MakerSpace. They also cannibalized some parts from previous years’ robots.

“We spent quite a bit of time on this,” Merritt said.

Students Quinn Taylor and Sam Ramsbottom came up to Powell from Kaycee with their instructor, Tom Schmid, who teaches computer science, woodshop, transportation and business.

“I’ve always been interested in building stuff,” Ramsbottom said of what got him into doing robotics.

The Kaycee students, who called their team Six in a Row, were a fairly new team. Taylor said he was kind of nervous about the scrimmage, but the other students at the event were very helpful.

Students on two teams from Midwest, near Casper, were also in the scrimmage. So Be It Union, as the team is called, was less than a year old, whereas 4-Spot had a bit more experience.

Midwest sophomore William Gottsch, on the 4-Spot team, said he’s been in robotics since fourth grade.

“It’s a good way to do things you don’t usually do,” Gottsch said.

Students from Columbus, Montana, and Cody were also at the Robo Rumble, preparing for the coming state tournaments.

The four Powell High School robotics teams competed at the Montana Championship Tournament of the FIRST Tech Challenge in Bozeman last week. Radioactive, Robo Panthers, Mad Hatters, and Squiggle Splat Bang didn’t advance to the world championship, but they did walk away with some awards.

Radioactive won the Second Place Motivate Award, which is given to the teams that best embody the FIRST values of professionalism and teamwork. The teams compete in alliances. Squiggle Splat Bang competed in the finals as the Alliance Captain, which is the highest ranked team in an alliance, but lost the match.

The teams will compete again at the Wyoming Championship Tournament in Casper in February.